In the past couple of weeks I’ve seen a huge bunch of older (as in not in cinemas) movies and I’ve been trying to figure out how to blog about them. I don’t really want to do my standard type of review, cause most people have seen those movies. I just want to let you all know what I thought about them. So I’m doing a long post with short pieces about each movie I’ve seen, thus Mini Movie Reviews.

Requiem For A Dream

This movie kind of stumped me at first; I wasn’t sure how to describe it. I tend to like movies I enjoy (don’t we all?), but Requiem For A Dream isn’t enjoyable at all. It’s a great movie, but it’s as if it chews you up and then spits you out, leaving you feeling like utter crap. And yet still you can appreciate the film, cause it’s beautiful in it’s own twisted way. I loved the music before I watched Requiem, but now I’m not sure I can even listen to it, without feeling a little bit disturbed. Don’t watch this movie if you’re feeling depressed, cause it’s only going to make you feel even worse. 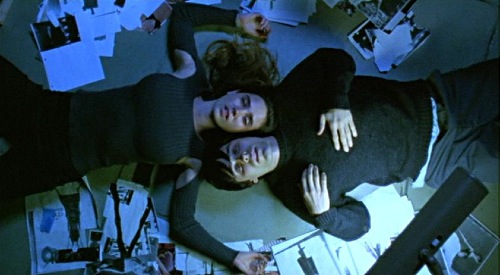 By saying this I might just be confirming I’m a product of my generation, but for me the pacing of 2001: A Space Odyssey feels way, way too slooow. Some scenes just drag on way too long with nothing substantial happening. And then that ending?! this doesn’t happen to me often and maybe I’ve got some more reading to do, but I didn’t get it. I do see why people think so highly of this movie, but (and please don’t kick me for saying this) for me it feels a bit outdated. Not the story, but the look and feel of it, and that just doesn’t help for me to get into the movie.

I now understand all the Oscar talk surrounding Atonement last February; it is a good movie, if you can keep your eyes open and watch the entire thing. I had to rewatch the first half an hour 4 times, because I kept getting distracted and lost track of the story. Especially at the beginning the movie jumps back and forth a couple of times to repeat events from multiple view points. I only don’t get all the excitement about Keira Knightley’s green dress. It’s a pretty dress, I’ll give you that, but I don’t see what’s so special and amazing about it.

I was disappointed by Little Miss Sunshine, but then I was expecting quite a bit from this movie. I somehow thought it would be more funnier and less serious than it actually was. I thought it was a feel-good movie and instead you just get one bad event after another. I liked the ending, but still wasn’t completely what I expected.

What a mess of a movie! It’s from the same director/writer of Donnie Darko, but fails completely where Donnie Darko didn’t. Southland Tales has too many plot lines and too many characters for you to fully invest and care about them. You don’t give a shit about what happens to them, but that doesn’t really matter: at most times you don’t even know what or why things are happening to them. Too many things are going on in this movie and it doesn’t take time to explain itself properly (and that with a running time of 145 minutes). Apparently there’s a comic book prequel which in fact is half of the story and clears everything up, but that just sounds like too much homework for a simple movie like this. 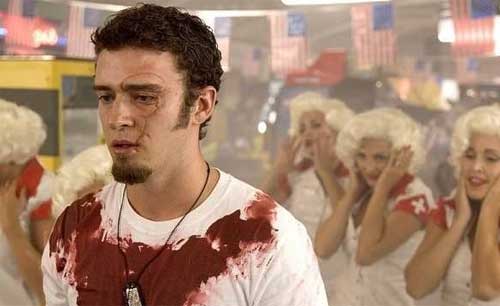 You could sum up the events from this movie in a few short sentences (I won’t, cause I’m not in a spoilery mood), even though the film is 2 hours long. Again like Atonement, I understand why it’s an ‘Oscar‘ film, but it’s just not my type of movie. It’s all about the grey areas of life and the decisions people have to make. Expect a lot of talking, not a lot of action.

I had never heard of Unknown before, but it’s got Jim Caviezel, Greg Kinnear, Joe Pantoliano and Bridget Moynahan. And it’s an interesting little movie. Five men wake up in a locked warehouse, all with no memory who they are and why they’re there. Some of them are tied up and it seems a fight just went down. The five are forced to figure out who among them are ‘bad guys’ and who are ‘good guys’. It’s a cute idea, and while not without it’s faults, it was a nice little surprise.