I sometimes manage to get free tickets to pre-release screenings, but rarely get to share this with my friends. With Wall•E though I was able to get about 20 tickets and with a lot of coordination via email and Twitter, I got a great repsonse of all the people willing to go. So last Saturday morning a huge group of geeks gathered together at the Vue cinema in Shepherd’s Bush to watch the wonder that is Wall•E. 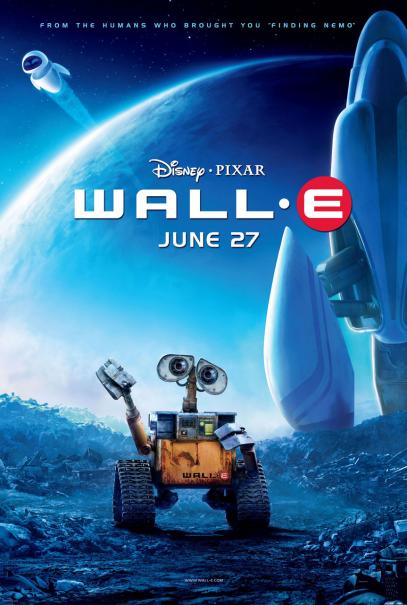 Wall•E is a small waste allocation robot, left behind on Earth to clean up the mess humans made. It’s been a couple of hundred years, since the humans left, and he’s the only one of his kind still working. Wall•E fills his lonely days with compressing trash, building large towers of processed waste, while collecting little treasures, like christmas lights and Rubik’s cubes. His whole life changes when Eve, a shiny white robot, arrives on Earth with a important classified mission.

I don’t want to give any more than that away of the plot, cause I think the less you know, the more you’ll enjoy it. I for one loved Wall•E! It’s definitely my favourite Pixar film now and I guess it may even be my favourite film of this year. So many things just work and it’s just this little perfect gem of a movie. As with most other Pixar movies, Wall•E is a true family movie, that everybody any age will enjoy. And it’s timeless. In 20 years time, people will still look back at this film and laugh at the same moments. While some may say that is true for previous Pixar animations, I truly think Wall•E will be the one to go down in history as a classic.

You may have heard there is no dialogue in Wall•E and that is only partly true. There is some dialogue, but none from our two main characters Wall•E and Eve. They largely communicate through beeps and body movements, with the occasional robotic “Wall•E” or “Evah” thrown into it. Any other studio might have messed this completely up, but in Pixar’s competent hands it works. The noises the robots make convey their meanings perfectly; every beep, rattle and ting feels like a sentence, as if they’re just talking some language you don’t understand, but do comprehend. It shouldn’t be a surprise though. Pixar didn’t just get any sound effects editor, they got the best in the business: Ben Burtt, who was also responsible for the sound effects in all the Star Wars and Indiana Jones movies. Besides that, Wall•E and Eve are animated brilliantly, expressing their emotions through movement. Anger, shock, fright, happiness: it’s all conveyed through wonderfully choreographed motions. This and the sound effects together help describe a relationship that should be recognized across language barriers.

I think that relationship is one of the main reasons I like Wall•E more than other Pixar movies. Wall•E is first and foremost a love story, and the romantic in me just resonates better with this movie than the previous ones. There’s more to the movie than only the love plot though and to some that may be Wall•E‘s only pitfalls. I can’t go in to it, cause I don’t want to spoil it for you, but for me it fitted perfectly as part of the story (cut it away and the movie just wouldn’t have worked).

I already said a bit about Wall•E’s and Eve’s animation, but I should also highlight their designs. Wall•E does look a bit like Johnny 5 from Short Circuit, but it doesn’t feel as if they were ripping that off. It seems to me that if you want a robot that is similar to the human form (that doesn’t have legs), you’ll quickly come down to a comparable design. And Wall•E feels much more functional; all his parts are integral to do his work. Eve on the other hand does look as if she’s been designed by Apple; she slick, white, shiny, round and everything (like her arms) clicks away to form one smooth object.

If I haven’t made it clear already, Wall•E is visually stunning. Besides the design and animation of our two main characters, the rest of the world is also as amazing. Earth is just how you imagined it could be if trash was overflowing so much (although I hadn’t expected the towers of processed trash) and it serves as a great desolate backdrop to our lonely protagonist. Other scenes are jaw-droppingly beautiful and I can only imagine the amount of work that must have gone into creating them. Even if the story and characters hadn’t been this great, I still would have recommended this movie for the visuals alone.

Wall•E may be the most perfect movie of this year and I don’t think anybody could dislike this movie. If you could only see one movie in the cinemas this summer, go see Wall•E (although The Dark Knight might give it a good run for it’s money). I have a feeling this will remain one of Pixar’s greatest movies and it’ll go down in cinematic history.