Because Melinda’s family was in town this week, I was able to attend an exclusive screening of a new ITV sitcom No Heroics. Although there is no trailer or footage that I can actually show you, I can give you my thoughts on what is to become ITV2’s first ever sitcom.

The setup of No Heroics is simple – a group of British off-duty superheroes living their day-to-day life, which for supposed saviours of the world is actually rather normal, as they just can’t be arsed. Instead, this group of b-listers would rather get drunk in their local superheroes-only pub and commiserate at their lack of superiority.

The series follows the lives of a group of four superhero friends. First off there is The Hotness (Nicholas Burns), who controls heat but isn’t that much of a hottie in real life. His ex-girlfriend Electroclash (Claire Keelan), daughter of two famous A-list superheroes, but honestly not that much interested in saving the world as she is in getting a pack of cigarettes. Then there is She-Force (Rebekah Staton), the third strongest women in the world, with probably the lowest self esteem of all. And finally, my favorite, Timebomb (James Lance) is a homosexual Spanish retired superhero that can look 60 seconds into the future. They are supplemented by Excelsor (Patrick Baladi), a rival superhero with Superman-like powers who is a real prick and wouldn’t let a moment go by to humiliate The Hotness and flirt with Electroclash. 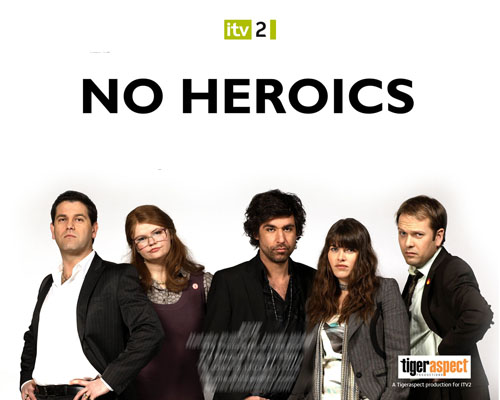 It is quite understandable where the idea behind No Heroics comes from. In a world where almost every super hero comic ever is being turned into a feature film, it is understandable for a TV station to hop onto that same bandwagon. Add to that the success of a series like Heroes and you got every TV studios executive hooked to the idea. Still, I feel that although I laughed my ass off due to some of the jokes, No Heroics is not all that it seems to be. To understand this one must understand that there is a good reason why some of the latest superhero productions have worked out so well. There is a great fan base for existing comic book heroes and their stories (which fans don’t like studios to mess with too much) and people love new, original, intelligently written newcomers like Heroes.

No Heroics though seems to be lacking on a few of these parts. To start off, as it is not based on any known characters there is no fan base, so to create one the writers need to compel the audience to bond with the characters. Classic ways of doing this would be something like an origin story, or a personal struggle with their super power responsibilities. None of this though seems to be in there as the writers have decided to stay away from the heroic part of the characters for most part and focus as much as possible on the heroes’ sex lives or need for cigarettes.

And this is probably the biggest problem I personally had with this show. Although this show seems to be written for (comic) geeks, most of the jokes seem to have been brought back to a nights-out-in-the-pub-humour-level of a 16-year old boy. Though occasionally funny, the amount of sex jokes in the two episodes that I saw were not really representative for the average comic book geek’s humour. Maybe I can explain this better when we look at a show like The IT Crowd which is obviously also written for (in this case IT) geeks. In this show, the characters are geeks, the situations they end up in are geeky, and the amount of geek culture references has not been limited to decorative items as is in No Heroics. As a result The IT Crowd is a much more representative kind of humour for the kind of people that might identify with the settings, than can be said for No Heroics.

That said, all this complaining might just go on the records as a personal whine by me as I have to admit that I have laughed loudly quite a few times, and the fact that I already picked my favorite hero of the show (Timebomb) can’t be ignored either. We have to see where the story goes and how in time the jokes and characters will grow in the hearts of the true comic book fanatics.