A couple of weeks ago I won a Tokyoflash watch via a contest on Geeks Are Sexy (btw those geeks rock!). It arrived last week, so I thought I’d do a small review of it. The watch I got is of the red Tibida design and it looks great. It has a polished stainless steel case with a red face and a polyurethane wrist band. The cool geeky thing about Tokyoflash watches is that they all have a unique way of displaying the time to you. In Tibida’s case there are four different display options: hour-centric, minute-centric, binary and date.

In the hour-centric mode, the bottom half of the display (the two 5×3 LED grids) is used to show the hour, The minutes are showed in the top half (the 2×6 grid) with each LED representing 5 minutes (so 8 LEDs on is 40 min). WIth the minute-centric mode, it’s the other way around. The bottom half is used for the minutes, the top half for the hours. Here are examples of both of them: 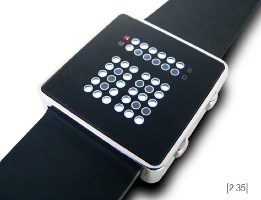 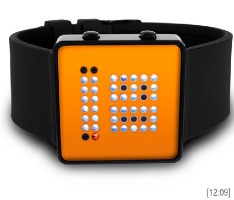 The binary option is (of course) the geekiest of the bunch. It doesn’t use the bottom half at all, only using the top 12 LEDs to show the time in binary. Very cool, but not that handy if you quickly want to know the time (at least not yet for me, still have to train myself a bit better). The last option, date, simply shows the date today, with the month in the top half and the day in the bottom half.

So far I’ve just been listing facts, not really giving my opinion on it. To be honest, I’m not completely convinced by it. It’s a very cool watch, but I’m not sure it’s the best fit for me. For starters, the wrist band isn’t that comfortable. The problem is with the area where the face connects with the band; instead of forming a smooth round band around the wrist, the top part is on a slightly weird angle (as if the band doesn’t want to bend that way). Now it could be that my wrists are just too skinny or the plastic is still too stiff, but at the moment it won’t fit comfortably around my wrist. Weirdly enough it does fit around my wrist; normally, I have to puncture an extra hole in the band. I think though the Tibida will fit fine if you have a bit more wider wrist than me and maybe given some time it will fit me better too.

Another thing you must realize with this watch is that the LEDs only go on when you press the button. So that means every single time you want to look at the watch for the time, you’ll have to press that button. Besides that you can’t look at it from an angle, cause otherwise the LEDs don’t make much sense. You really have to look straight at it. They’re not really problems or “end-of-the-world” bad, but it’s a new type of flow you have to get into. On a personal note, I discovered I don’t use my watch to know the exact time, I use it to know how much time has passed or will pass. For this, I’m so stuck in my ways with an analogue clock, my brain is so used to processing the angles and quarters of a clock face. For instance, when I know something will take 15 minutes to do, but don’t know what time to start it, my mind will be constantly updating the image I have of a clockface and moving the quarter around.

Anyhow, the Tokyoflash watch doesn’t completely suit me… as a watch. I don’t see this replacing my standard (but boring) analog watch. But as a geek accessory though it’s fantastic. Plus it’s almost the right shade of Miss Geeky red, fitting perfectly with some of my clothes. While not completely what I expected I do love it, so expect seeing it on me at a future geek event!

Pssst, there are even more watches on the Tokyoflash site. Some of them are way crazier…