Leverage is a new series coming this fall (actually December) from Dean Devlin, the writer behind Universal Soldier, Stargate, Independence Day and Godzilla (yeah, not too impressive, but still interesting).

Nate Ford (Timothy Hutton) is an ex-insurance investigator, who once tracked down stolen goods and the thieves behind them. After the death of his son, due in part to an insurance company who didn’t want to pay for the treatment, Ford is approached to “re-acquire” stolen designs from an airplane manufacturer. He’s forced to work with individuals he at one time in the past crossed paths with: Eliot Spencer (Christian Kane), a retrieval specialist; Alex Hardison (Aldis Hodge), a computer and gadget expert; and, Parker (Beth Riesgraf), a thief. Eventually they’re also joined by Sophie Devereaux (Gina Bellman), a horrible on-stage actress, but con-artist extraordinaire. 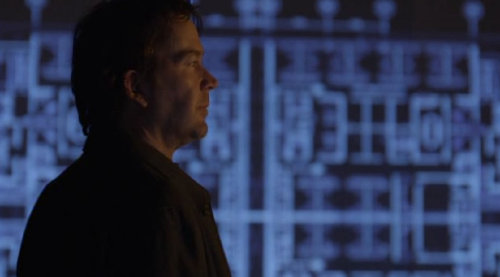 Let me first make a couple of things clear. The version I watched had the music from Hustle under it. While this might make it through to the final cut, I’m guessing that was just a temporary thing. This means though that they could possibly change anything and everything in the time it takes until it eventually airs.

Leverage is a fun new series. It’s a combination of Ocean’s Eleven, The A-Team and any hustle/thief type of show. I’ve never watched Hustle, so I can’t really say if it’s anything like that or not. I’m not even sure if Leverage is based on it or just loosely inspired (“ooh, you know that British Hustling serie? Let’s make that but with Americans!”). Like Ocean’s Eleven it’s got a good worked-out plot, but I wonder if they’ll be able to keep it interesting for an entire season. It’s difficult to bring a smart story every single week, especially if you also want to try and surprise your viewers a bit on the way. Fingers crossed they can achieve that. 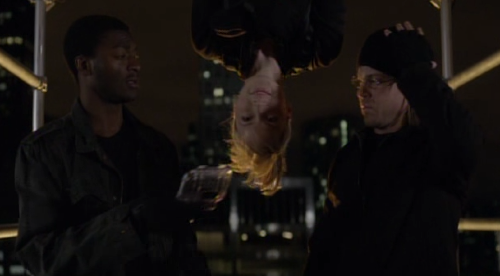 This is very much an ensemble series and the actors all have a great chemistry together (I’m hoping they won’t recast). Timothy Hutton is great as the slightly older mentor figure, who suddenly is playing on the other side, although I hope they don’t focus too much on his dead son story line. Christian Kane is interesting as Spencer; somehow I wouldn’t have imagined casting him in that role, but that’s the reason why it works. I loved Gina Bellman in Coupling and it’s great seeing her on TV again. Surprisingly she isn’t even the craziest character (although she has some great moments). That honour goes to Parker, played by Beth Riesgraf, and I’m curious to see more of her backstory. Finally, the computer geek Alex. There are a couple obvious geeky jokes in that pilot, but still I really liked the character.

The only problem I had with the show is that it felt a bit slow at times. Somethings were dragged out a bit too much and it would have worked better if those moments were a bit snappier. As I said before, that might still change and I’m hoping it will.

Just like The Mentalist Leverage is an easy to get into new TV show. There’s no real big season thread (maybe the dead son), and most episodes will be stand-alone. This will be another show going on my to-watch list, although I’m curious to see if they’ll change anything about it first.