I discovered a great little bookshop called Bookends in Charing Cross Road (London, of course) that sells “unwanted” books at a discount. One of the books I found there was Warprize by Elizabeth Vaughan (for £2.50!). This book had been on my radar for some time, but I couldn’t figure out whether or not it would be my type of book. Finding it for £2.50 though? I couldn’t resist trying it out.

Warprize is about Xylara, Daughter of the Xy, who has chosen to serve her people as a healer, until she is needed to make a marriage of alliance. Her half-brother, Xymund, is on the throne, but his reign is unstable and he is not popular in the eyes of his people. The kingdom of Xy is under attack by the barbarian Firelanders, and casualties are high on both sides. Disobeying Xymund’s orders, Xylara tends to the wounded captured Firelanders, but this soon brings her to the attention of the Firelander Warlord. When Xy is forced to surrender, the Warlord demands but one thing: to claim Xylara as his Warprize. 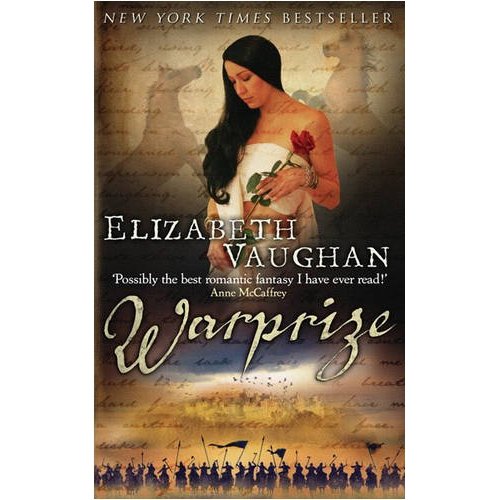 I couldn’t put this book down! It’s been ages since I finished a book this fast: in two evenings, reading it before going to bed, and then a little bit during the afternoon, nothing more. The book is only 300 pages, so it was a pretty quick read anyway. Still: it’s definitely a book you’ll at least attempt to read in one setting.

Genre-wise it’s a romantic fantasy. Regular fantasy readers might be put off by the romance bit, thinking it’s too much of a romance novel. It isn’t. It does have a romantic relationship as a key plot line, but it nudges much more to the fantasy side. Lots of descriptions of the world and the differences in traditions between the Xyians and the Firelanders. Romance readers will love this book too though; Xylara and Keir are a great couple, although their relationship does unfold slower than in your usual romance fare. Their story is continued in Warsworn and Warlord, so don’t expect a HEA (Happily Ever After) at the end of this book.

The whole story is told from Xylara’s point of view, and at times that can be quite restricting. I would have loved to see the perspectives of some of the other characters, especially Keir. Despite that though, Xylara is a great character to follow: she takes her vows as a healer serious, and is willing to risk anything, if it means saving lives. Because of the first person view point, you really get to see how her mind works and why she acts like she does.

Warprize is a surprising great read and definitely worth getting. Especially if you find it for only £2.50 🙂 Warprize by Elizabeth Vaughan is £5.59 on Amazon.co.uk