Cristiano and I were able to borrow a Playstation 3 for the weekend, and finally got to try out a couple of games. I mainly wanted to see if our TV could handle the graphics and if it was worth eventually getting a PS3. To be very honest, I would love to get a PS3, but the cost of it just doesn’t seem worth what you get for it in return. My sweet little PS2 takes up way less space and makes less noise, although it of course doesn’t play the newest games. Maybe when the next Final Fantasy is finally released (XIII has a release date for winter in Japan, and XII had almost a full year between Japan and Europe releases), I’ll get around to buying one. For now though the PS2 and Nintendo DS will suit me just fine. 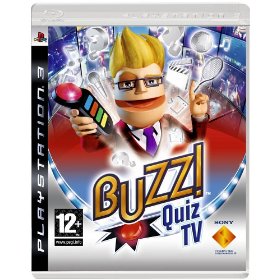 Anyhow, one of the games we tried this weekend was Buzz! Quiz TV. Buzz! Quiz TV is the seventh game of the Buzz! series of quiz games, and is the first to appear on the PS3. It is also the first game to use the new wireless Buzz! controllers.

I hadn’t played any of the Buzz! games before, but for a time now I’ve been curious to see how the gameplay is. The Buzz! controllers are great; you get much more a sense that you’re playing a quiz game, when you’ve got a big red button at your disposal. Besides the big red button, there are four smaller coloured buttons (blue, orange, yellow, green) for picking answers from the onscreen options. I love the fact that these controllers are wireless; I can’t imagine playing this game with wired ones, especially with our living room setup.

There are two local options of games: single-player and multiplayer. When playing single player, you get three rounds of Stop The Clock: the faster you answer a question, the more points you get. The multiplayer game consists of seven rounds:

Point Builder: for each correct answer you get 250 points.
Pass The Bomb: answer a question correctly to pass the bomb to another player. If you end up with the bomb when it explodes, you loose 300 points.
Fastest Finger: the player who answers the fastest receives the most points (400). Every subsequent correct answer receives less points.
Pie Fight: if you answer the fastest, you get control of the pie and can throw it at another player. When hit by two pies, you’re kicked out of the round.
Point Stealer: the player who answers the fastest may steal points from another player.
High Stakes: after a brief description of the topic, you have to bet a number of points. If you answer correctly, you win those points. If you answer incorrectly, you loose the points.
Final Countdown: each player is on a raised platform that is slowly moving to the ground. Answering questions correctly slow you from hitting the ground. Answering questions incorrectly speed it up. When your platform hits the ground, you’re kicked out. The player that remains standing wins. 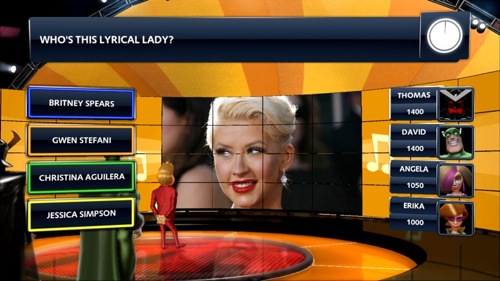 I really liked how this game was setup; the different types of rounds add an interesting aspect to the game. Before each round, the player with the least points is allowed to choose the topic, allowing them to pick other player’s weaknesses (or their own strengths). Some rounds seem a bit unbalanced when only playing with two players (like the Pie round), but it’s still a lot of fun. The topics have a nice range from general knowledge to movies to science and technology. There was the option to play a game within a specific topic (like movies), but I would have loved to seen the opposite: a way to exclude topics. I’m fine with most questions, but I don’t really like sport (and neither does Cristiano), and we would have loved to see a way to leave those questions out of it.

There’s also an option to play online, but I haven’t tried that out yet. The idea is that players are able to create their own quizzes, each containing 8 questions. These can then be shared online with other players. There are also special question packs available in the Playstation store, but these will also be available on the special edition version

I did enjoy this game and I’m looking into getting a PS2 version. It’s a great party game and more addictive than I first imagined it to be. The wireless controllers are a must-have; they make the game so much easier. I’m now curious to see how the specialized versions are, especially the Hollywood one.