As promised, here is the second part of the interview with Ron D Moore (check out the first post here):

Q: I absolutely love the Caprica pilot, so I was wondering if you could talk about this virtual world. Is this at all kind of similar to the holobands that was introduced on the Caprica pilot?

Ron Moore: I was sort of aware of the similarities between the two. They do have different purposes and different sorts of constructs to them. They both involve putting a set of goggles on your face, so they’re similar in sort of that perspective. In Caprica it’s really much more akin to the Internet where you go out and the virtual spaces are practically infinite and they intersect with one another. On Caprica you can go from the V-Club where we establish in the pilot is sort of a hacked world and then, presumably, there are worlds of war craft type of worlds, etc., etc. It’s all sort of interconnected into their version of the Internet.

In Virtuality we’re looking at something much more discrete, much smaller, much more of a gaming type of environment where an astronaut has a specific virtual reality module that they go into and play whatever game or have whatever experience they want, but there is no expectation that you can cross from one module to another.

Q: Ron, just still following up, if it only lives as a two-hour movie and doesn’t get picked up is there any thought of maybe trying to push to do another two-hour movie where you could tie up some of the thoughts that you wanted to or, as a lot of creators are doing now, maybe taking it into a different media, like a comic book so you could continue to expand on the theme?

Ron Moore: I think all of those are possibilities. We’ve talked about all of those possibilities. It’s just kind of one step at a time. I think it’s really hard to say. It depends on where we go after the broadcast and, A, after the ratings, after they start looking at demographics, after they start looking at word of mouth. Sometimes these things have a bigger life that sort of blossoms a few weeks after the broadcast. There’s a buzz going. People talk and then they start wondering when it’s on DVD … and decisions about where we would go with the underlying properties is just really hard to say where we are right now.

Q: Are you ready in your mind on where exactly you’d want to go if it either stays in the same medium or if it jumps somewhere else? 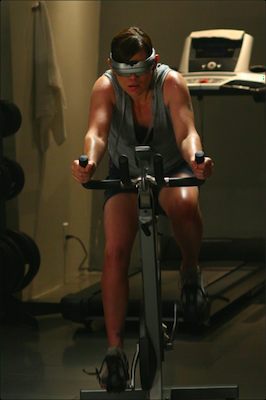 Q: I really love the idea of the virtual worlds and I was wondering what type of virtual worlds could we see in the movie and maybe in the series if that continues.

Ron Moore: You’ll see kind of a range of virtual worlds. Like I said earlier, it opens in the Civil War in an action sort of piece and then there are more pastoral settings. There is a home. There are actually doctor’s offices. There are rock concerts. There is quite a range of areas that we went into, which was a deliberate choice. We wanted to sort of show that we were going to use these worlds in sort of disparate ways and that they would all be sort of tailored to specific characters and what they were interested in going to do, so you’ll see quite a range of virtual worlds when you get in there.

Q: I was reading somewhere that you don’t really reveal the year or what the actual emergency to the earth is. Was that done intentionally?

Ron Moore: Actually, that changed over time. Initially we didn’t really specify those things. We wanted to keep it looser and kind of vague because I just thought it was more interesting than nailing down the specifics on all of that, but as we went through the process we started to nail those things down. We just started to feel like we had to answer certain questions. I think we did; I know you’re going to ask me what year it is and I’m not going to know off the top of my head, so don’t ask; but I think we do refer to the year and we definitely talked more about the nature of the emergency.

Q: Yes. There was something written, a piece of dialogue, where it said, “Dry land is really expensive now,” so I …

Ron Moore: Yes. We expanded on that idea a little bit more.

Ron Moore: It’s kind of explicit. I mean there is a commercial for the reality show within the show. Within that commercial it kind of lays out some of the broader parameters of the mission, about what’s happening on earth and why the mission has taken on a new urgency. The mission started out as just one of exploration and then something going terribly wrong back home in terms of climate change, in terms of the environment, or so the astronauts are told. That’s kind of where we are.

Q: Okay. Did you look to any other properties for inspiration, like Sunshine or 2001?

Ron Moore: Not specifically. I mean I think we were aware of Sunshine and we sort of wanted to try to not go into it. We had seen it and we were like aware that there were certain similarities to some of it. We then kind of wanted to go out of our way to make sure that ours was different, so we were kind of like in that place. 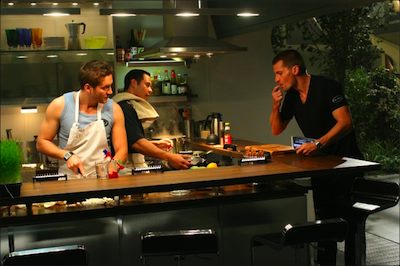 Q: What is your relationship with reality TV? Are you a fan?

Ron Moore: I started off as a skeptic/hater of it. Now, actually, there are definitely reality programs that I like. I think probably at the top of that list, I’m a very late convert to Deadliest Catch, which I had heard about for a few years. I was even on a panel once with the executive producer and never really watched it. Then this last season finally my wife and I decided to give it a try and I was really taken with it, really drawn into it and impressed with the quality of the production and the seriousness with which they do this reality show that’s really a documentary every week. From there I like Project Runway. I like Top Chef. I’ve been suckered in, as it were.

Q: Thank you. Do you have any closing remarks?

Ron Moore: Well, I do actually. There is a series of Webisodes that were created for Virtuality. Webisodes are not just your traditional here’s an extra piece of story that you didn’t see on the show and here’s another little segment to tease you. The Webisodes for Virtuality are actually segments of the reality show within the show itself, so when you would log onto the Web site what you would see when you tagged on the Webisodes is you would see pieces of the reality show as it was broadcast back to earth, which was in the pitch when we sold it to the network originally. We said, “Everyone is always looking for this sort of interaction between the broadcast show and driving people to the Web site.” It’s always been sort of an uncomfortable marriage and they never seem to quite marry up in an interesting way for the audience. Ours has this really sort of organic way to do that where you could go to the Web site and experience Edge of Never is the name of the show, so you could go see Edge of Never on the Web site.

The concept and the plan would have been if the show went to series that every week you could log in on the Web site and see pieces of the reality show and buried within those pieces of the reality show would be actual information and clues that would not be accessible to the people watching the broadcast of the show. There was going to be a deliberate effort to sort of say, “Really, if you want to get all of the idea of what’s going on and to even crack some of the underlying mysteries to what the series is about, you would have to go and watch these pieces of Edge of Never,” because the idea within the show was that the astronauts may not be aware of how the show itself is being viewed back on earth. They may not understand certain things, but the audience back on earth might understand certain things.

There was this interesting relationship between the Webisodes and the series. My understanding is that right now Fox is going to put them up. There is a Facebook page for Edge of Never and I think in the next few days, if not early next week, certainly by early next week, you can go to the Facebook page and you can start downloading or streaming or however they’re going to make it available to you, these Webisodes, which would sort of build interest in the show and show you chunks of Edge of Never only on Fox. It would have the logos and it would have the astronauts behind the scenes of their reality show, sort of content for viewers to check out. I would encourage people to go and take a look at it, because I think it’s a unique bit of Virtuality.