Book Review: Luck In The Shadows by Lynn Flewelling

When young Alec of Kerry is taken prisoner for a crime he didn’t commit, he is certain that his life is at an end. But one thing he never expected was his cellmate. Spy, rogue, thief, and noble, Seregil of Rhiminee is many things-none of them predictable. And when he offers to take on Alec as his apprentice, things may never be the same for either of them. Soon Alec is traveling roads he never knew existed, toward a war he never suspected was brewing. Before long he and Seregil are embroiled in a sinister plot that runs deeper than either can imagine, and that may cost them far more than their lives if they fail. But fortune is as unpredictable as Alec’s new mentor, and this time there just might be…Luck in the Shadows.

I read this book and it’s two sequels ages ago, back when I was still in high school. I loved the story, but never got around to re-reading it. This year though the writer is releasing two more books in The Nightrunner series, and I knew I should pick the first ones up and delve back into that world. 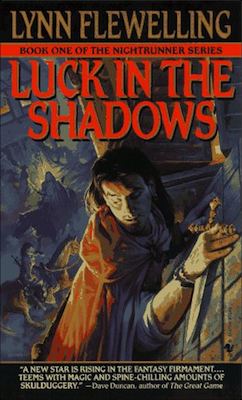 The main thing I love in this book are the characters; Alec and Seregil are both likable and easy to root for characters. It only takes a couple of pages, and you’re already invested and caring for these characters. The loyalty and friendship that slowly forms between them is amazing to read; they are not many writers I’ve seen that are able to pull this off. I also liked that they weren’t your typical heroes; Seregil is a spy/thief and takes Alec on as his apprentice. Most of the book shows Alec’s introduction to this world of intrigue which he never knew about, and the not always “honest” way of making a living.

The world that Flewelling built here is also pretty interesting. There’s sorcery and prophecy, but never falling in the familiar cliches that other fantasy books often do. The wizards here have power, but aren’t all too powerful, and the main characters clearly don’t rely always on magic to save their skins. Besides that, Skala (the main country where it takes place) has a rich backstory, with history and politics going back centuries.

The books after this one venture into slightly more mature themes, and not everyone might be comfortable with that. If that doesn’t bother you at all though, I’d highly recommend this book. It’s a great read, and one of my all-time favourites.

Luck In The Shadows is Part One of The Nightrunner Series by Lynn Flewelling – £5.99 on Amazon.co.uk, $7.50 on Amazon.com