TED Talks: What We Know and Seeing Is Believing?

The main difference of seeing the TED talks in this conference type structure instead of just online, is that you discover and notice the different themes and structures of the talks. For instance on the first day, there were two sets of session slots: the first called What We Know, the second Seeing Is Believing?. While they’re not all exactly about the same subject, they all are connected in some way or another, and it’s great for your mind just to wander around for 1.5 hours within one related topic, but with different views.

Yesterday there were 12 talks/performances, and I have to admit I did zone out a bit at a certain moment. Not all TED talks are interesting to everyone, but the beauty of TED is that everybody should find something within them that will spike their interest. The talks that really stood out for me were the following: 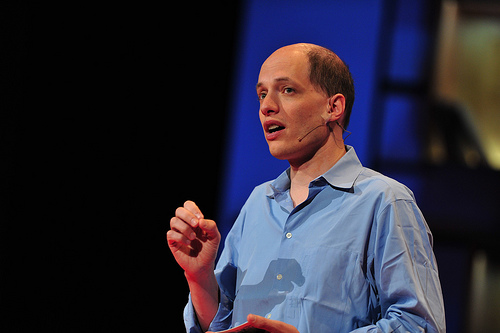 Alain de Botton: the world we live in is a meritocracy; if you have talent, you’ll get to the top, your position in life is merited and deserved. Because of that our failures “hurt” more than they used to; formerly 200, 300 years ago, it was God/the universe/fate that caused you to fail. Nowadays we take much more responsibility for the decisions in our life and where we end up in life.

Willard Wilgan: Wigan is a microsculptor, who creates miniscule sculptures that fit on the head of a pin. He explained how he got into it, and showed some of his amazing creations. There’s an exhibition going on at the moment here in London; I’m thinking of organizing a geek trip to it (let me know in the comments if you’re interested). 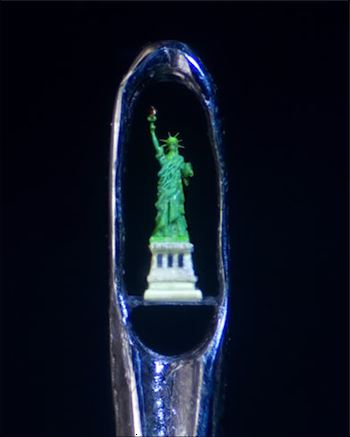 James Geary: Geary is an aphorist; he loves short, witty sayings that are known as aphorisms (I had to look up the definition: “a pithy observation that contains a general truth”). He gave a couple of his favourites, like “Mirrors would do well to reflect alittle before throwing back images.“, “Baldness is the gradual transformation of the head into an ass, first in shape and then in content.“, “A weekend wasted is not a wasted weekend.” While juggling Geary presents, the five laws of aphorisms: 1. brief, 2. definitive, but not necessarily true, 3. personal, 4. philosophical, 5. it must have a twist.

Steve Truglia: as a Hollywood stuntsman, Steve has done his fair share of amazing dare-devil stunts; being set on fire, skydiving, driving a car through a loop de loop. But now he wants to do the biggest stunt on earth: jumping from the edge of space. Steve first tells us about the history of stunts, and how technology has helped moved the art from taking dangerous risks to being in control of the safety at all times. In his Project Space Jump, Steve wants a helium balloon to take him to 120.000 feet, where he’ll jump down. The main challenge was developing a special space suit; one that’s lighter, more flexible and cheaper than the current NASA suits.

I tried to summarize the talks as best as I could, but some of them (especially the first one from de Botton) was much more deeper than only this. All of these should be released on the TED website one day. That’s the problem with TED though; you’ll never know exactly when they’ll release certain videos (they’re still releasing talks from 5 years ago). Anyhow, these are definitely ones you should check out once they’re available online.

For more TED Talks, check out the TED website