TV Review: The Water of Mars – Doctor Who Special

I always find it difficult to review TV shows. On one hand, I want to treat them the same way I do with movies: give my opinion on what I just saw, so that people can decide whether or not they want to watch it, without giving away any spoilers. On the other hand, I just want to geek out and start a discussion on what I thought about the show, with full spoilers in it. I can’t decide which to do here with the latest Doctor Who, so I’m doing both: I’ll first review the TV show normally, and then after a gigantic spoiler warning, I’ll put down my thoughts and ramblings on how the ep ended.

In this special, the Doctor ends up on Mars in the year 2059. Without realizing which year it initially is, he stumbles on the Mars colony station Bowie Base One, lead by captain Adelaide Brooke. Of course, trouble is afoot, with one of the crew members being infected by a mysterious life form. The Doctor soon figures out that the events of this day are set in stone and all he can do is watch how it all plays out in front of him… 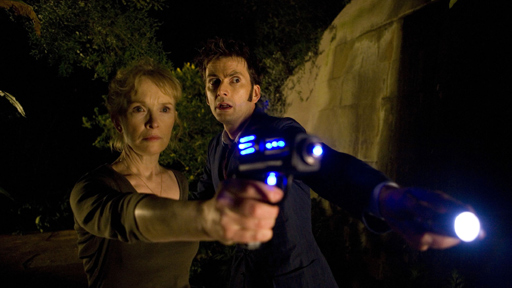 I didn’t really like the previous two specials (The Next Doctor and Planet of the Dead); in my opinion, they would have been okay as normal episodes in a full season, but they didn’t feel ‘special’ enough for, well, a special. For the first 40 minutes or so, the same goes for The Water of Mars: it feels pretty much like a filler episode. New characters who don’t get enough screen time for you to care about them, a ridiculously unscary monster-of-the-week (they somehow reminded me very much of Muppets) and lots and lots of running.

But then in the final quarter it all sort of comes together: the episode turns unexpectedly dark and leaves you hungering for more. It serves as a great buildup to the Christmas episodes, which (spoiler for those of you who have been living under a rock) will be David Tennant’s final two eps. The end of this episode only makes me realize how much I love Tennant’s Doctor, and I’m really sad to see him go. I’m keeping an open mind about the new guy, but Tennant is the main reason I started watching Doctor Who (I never watched the old series, and I couldn’t get into it when it first re-aired with Eccleston) and I know it won’t be the same without him.

Lindsay Duncan is great as captain Adelaide Brooke, this special’s sort of companion to the Doctor. She’s a strong character, although (like the Doctor) she gets relegated to running around for most of the episode. It’s only in the final minutes that she truly becomes interesting. Also: a mysterious person shows up on your Mars base, when your crew gets infected and you don’t for an instance think this mysterious person might be behind it?!?

As I said before, The Waters of Mars isn’t a great episode, but it’s a brilliant buildup to the finale with David Tennant. Unlike the previous two specials, it has gotten me hooked again to Doctor Who and I can’t wait how this will all end.

And now for the spoilery bit: 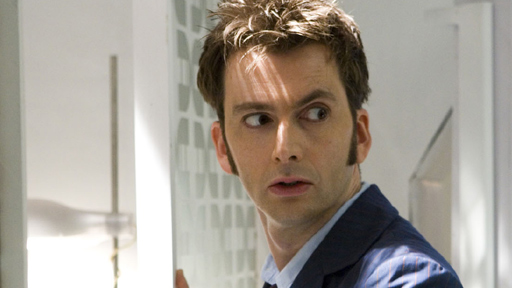 I really did like that last quarter of an hour. While the rest of the episode felt a bit flat, I was hooked by those final scenes. In my Watchmen review, I talked about the movie “high” (for lack of a better word) and I also have the same thing with TV shows.

I’ve always had this with most Doctor Who cliffhangers, and the same was with the ending of this episode. If there’s one thing the Doctor Who writers can do well, it’s building up (to be completely honest, most of the time this is then followed by letting us down with a disappointing finale). I know not everyone will agree with me, but I got that TV high while watching those final scenes unfold and was just glued to my screen.

The turning point for me was when the Doctor was just standing there, staring at how everybody else was going to their deaths. The pain on his face of having to see more people die and not being able to do anything about it. I actually cheered when he turned around and decided to help, to defy time and destiny.

In those final scenes the Doctor is going through some massive mood transitions, and as I understood it, that’s all because he’s trying to deal with his impending death. He can feel it coming, just as he sees the death of the Mars colony crew, and he doesn’t want to just stand by and watch. He HAS to do something about it, even though that means going against his own rules of never interfering and changing such an important moment in time. He knows it isn’t right, he knows that he shouldn’t be doing this, and for a brief moment, after Brooke commits suicide, he realizes he has gone too far, but it’s already too late. He’s on his path of battling his impending death, he won’t sit idly by and let it happen to him. 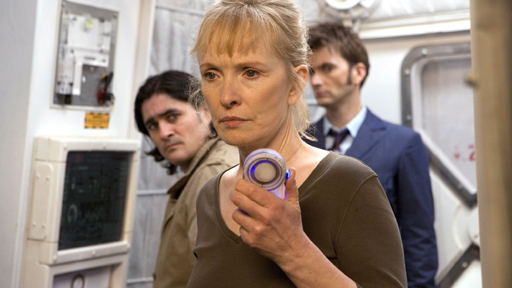 I’m guessing we’ll see the repercussions of these choices in the next episode. I saw that trailer when it came out at ComicCon and I am so excited to see that John Simm is back as the Master. Remember the final episode of season 3? After the Master was burnt on a pyre, a hand picked up his signet ring. We never got to see who that was, but my guess is that will be how the Master comes back now.

I am excited for the final two episodes, but I already have a feeling I know how this will play out: I’ll love the first episode (the one that airs on Christmas) which will end with an awesome cliffhanger. I’ll geek out and theorize and try to figure out what will happen, but ultimately I’ll be disappointed by the terrible finale. Russell Davies is brilliant in writing that build up cliffhanger episode, but the past two seasons’ finales were never as near as awesome as those cliffhangers.

What did you think? Discuss in the comments.