Sometimes it’s weird how some memories can just stick by you. I exactly remember when I picked up this book for the first time. It was during my second visit to London and I was browsing the books in the basement at Murder One. In the secondhand section I came across the second part of this series, and was annoyed to find out it was a second part. No way I was going to buy a second part first! Of course, some moments later I found the first one too, and I bought both books. 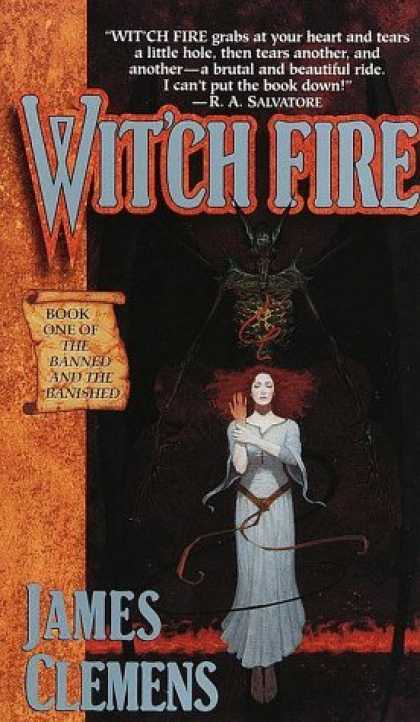 The Banned and The Banished series is one of those series that not many people have read. And it’s a shame cause it’s one my favourites. It’s being offered for free at the moment on Suvudu as a pdf, so it’s a great chance to check it out and see if you like it. Here’s the description:

On a fateful night five centuries ago, three mages made a desperate last stand, sacrificing everything to preserve the only hope of goodness in the beautiful, doomed land of Alasea. Now, on the anniversary of that ominous night, a girl-child ripens into the heritage of lost power. But before she can even comprehend her terrible new gift, the Dark Lord dispatches his winged monsters to capture her and bring him the embryonic magic she embodies.

Fleeing the minions of darkness, Elena is swept toward certain doom—and into the company of unexpected allies. There she forms a band of the hunted and the cursed, the outcasts and the outlaws, to battle the unstoppable forces of evil and rescue a once-glorious empire…

Elena the main character has a form of blood magic, unlike any I’ve seen in other books. Besides that there are a slew of other characters each with their own element of power; you have the wood nymph, the wind elf, etc. It seems pretty standard at first, but you slowly discover how much story and world building has gone into this. As the story progresses, the relationships and background stories get more and more complex, which I loved.

I enjoyed the first and the second books, but it’s the third one that completely got me hooked. Before that it was just one of the many enjoyable books I read. With the third one it became addictive to read. I read that one in almost one sitting, only stopping for food and sleep. And then I had to wait half a year for the fourth book… and had the same experience. Same with the final fifth book.

Of some writers I love the books as long as the series continues, but the moment it ends I’m frustrated with the conclusion. Not with The Banned and the Banished. It’s one of the most satisfying fantasy series I’ve read, where the world building, cliffhangers and mysteries don’t disappoint.

I hope I haven’t hyped up this book too much, but it really is one of my favourite series. Check it out on Suvudu.