A couple of weeks ago I was asked whether I’d like to try out the game Animal Kororo for the Nintendo DS. Sure, I thought, it looks a bit cutesy, but it’s a puzzle game and looks like fun. Surprisingly it’s actually a pretty tough puzzle game, despite the fluffy animals and pastel graphics.

Animal Kororo is a puzzle game similar to Bejeweled or PuzzleQuest, where you have to match up same coloured objects. Here those objects are cute fluffy animals; you’ll have pigs, blue polar bears, frogs and all other types of cutesy critters. The idea is to roll the animals across the board and make them bump into identical animals to make them disappear. It’s touch screen controlled, so it’s simply tap on an animal and send them rolling in the whatever direction you want. You can’t stop an animal halfway a roll though, once rolled it will continue until it bumps into anything (so wall, other animal or obstacle).

To make it even trickier (and believe me the above is already tricky enough), the directions you’re allowed to roll are always in the same order: up, right, down, left. On the right hand side of the screen, is a bar that shows you what  direction is up next. So it’s not just a matter of rolling animals when you want, but figuring out what the next roll is going to be. 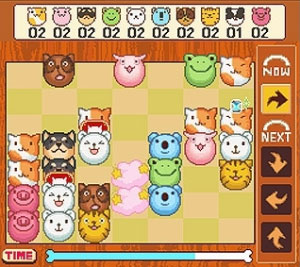 There are three types of modes (Attack, Challenge and Battle), each with varying levels (Easy, Normal and Hard). In Attack Mode, you get a list of which and how many of each animal you have to eliminate (see the top line in the above picture). In Challenge Mode, obstacles appear to make the levels more complex. And finally in Battle Mode you can play against a friend through single or multi-card play. In Attack and Challenge mode you also earn points, which can be then used to purchase items for a virtual house. It’s a bit silly, but the creatures are soo adorable, it kind of makes sense they added the tamagotchi element to it.

Animal Kororo is a cute little game, yet surprisingly tricky. I know I’ll be able to waste a good number of hours on this while on the tube or plane. And the animals are cute!

Animal Kororo is available for £12.00 on Amazon.co.uk.