I love being able to participate in Fox’s conference calls, and last Friday I got to join an interview with John Noble, who plays Walter Bishop on Fringe. This is a write-up of all the questions that were asked by the various bloggers and news outlets that were part of the call.

I’ve split the interview into three parts. One without spoilers today (unless you consider experiments in past episodes spoilers), and two for tomorrow and Saturday with spoilers about tonight’s episodes and some glimpses into the final eight episodes. 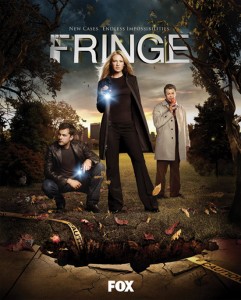 Q: There are really two parts to Walter. First, is the incredibly strange, but forward- thinking scientist. The other is just the really odd, random, forgetful man. Can you talk a little bit about what’s the most fun to play about that character and what is the most challenging?

A: Look, you’ve accurately described Walter, you know, as a man that is capable of incredible laser-like thought processes, and also is childish and haphazard and random. The joy of it really is that I’m free to make those choices, that sometimes Walter will hide behind his childishness. Other times, he will substitute a rage for a childish episode.

He’s an incredibly complex character. However, I think that there is a little of Walter in all of us, and certainly, I have observed in my life the extremes that we see in Walter I’ve observed in other people. The joy for me is that every day, the challenge is to make those choices as to which way I will go. And I work quite closely with the writers on this material as well.

Q: I spoke with Lance Reddick earlier this year and he said that you really enjoy working with all of the crazy, kind of disgusting props that your character gets to work with. So, I’m wondering if there were any that really actually grossed you out, as opposed to just fascinated you?

A: No, no, no, there were none that grossed me out. There were some that – because I basically know that we’re dealing with prosthetics, and some brilliant prosthetics at that, but I know that they are, and that we’re not actually hurting real people, so I sort of –it’s it’s like this incredible toy room to me. And the special effects people keep coming up with more and more gross things for me to play with and I don’t know where their imaginations live, but it’s astonishing, some of the things. And you haven’t seen some of the ones that I believe are the best ones that haven’t gone to air yet, to be honest with you. 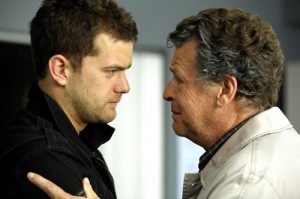 Q: What has been your favorite experiment on Fringe so far?

A: Oh Lord. There’ve been so many good ones. I liked the one where we made the silly one where we had the frog being injected from the table and into a net. That was kind of hilarious to do. I don’t know if you remember that one. We’ve done another one coming up which is how Walter describes how we cross universes and I think that’s coming up in an episode shortly. Again, it was excellent.

There’s one where we built a huge, sort of Lego building of a – I think this has gone to air – of a molecule, and I’m sure that one went to air. That was great fun. You know, what Walter manages to do is to make them look like the sort of thing that any child would want to play with while at the same time explaining scientific theory.

Q: Walter’s got a very distinctive way of talking, like an accent or something and I can’t quite follow. Is this your natural way, or have you added something, like a little bit of a touch of an authoritative science-touch or something?

A: Thanks. When I first approached the character, I was looking for something that was unique, and I guess came up with, and we could have done standard American, but looking for something a bit more Trans-Atlantic, because my experience with academics, they do have a slightly different way of talking, a little bit more [ed: missing word] sometimes. They mix with people from all over the world… So I guess what I settled on was something which could have been like a Boston accent but with English adaptations, and that was the Trans-Atlantic one. That’s what I’ve been trying to get as against the standard American. 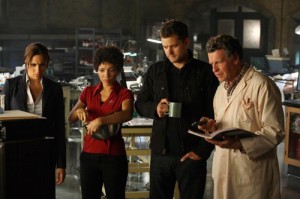 Q: Do you have a hard time turning off your character at the end of the day when you’re ready to go home?

A: You know, I don’t, but I quite often get asked that question. But no, I don’t. I can turn him off. I mean, perhaps I’m a little crazy most of the time, some people would say so, but I don’t certainly get depressed with him anyway.

Q: I was just wondering how much of the science that you get to say do you actually know what you’re saying?

A: Look, the rule of thumb is, is it within the realm of theoretical physics or theoretical science that this could happen? That’s the question I would put out there. And if someone can’t justify within the realms of theoretical physics, then I am saying, well, why are we doing it? You know, we don’t need to. There’s such rich material there already theorized by the great minds in science and chemistry and physics. So we try to make it at least possible theoretically, and that includes things like time travel and other universes and so forth, things that are theoretically possible.

Sometimes, you know, we cross the line a little bit, I think. But generally we are pretty – I mean my feeling is, you don’t actually need to make up rubbish, you know. There is so much tantalizing science out there to be done, that you really don’t need to make it up, and the writers seem to agree most of the time.

Come back tomorrow after watching tonight’s episode to hear more of what John Noble has to say.