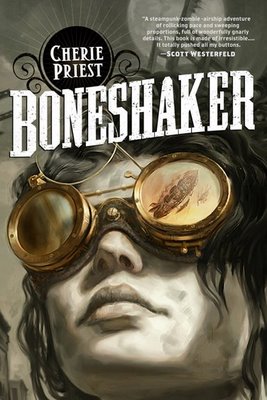 At the start of the Civil War, a Russian mining company commissions a great machine to pave the way from Seattle to Alaska and speed up the gold rush that is beating a path to the frozen north. Inventor Leviticus Blue creates the machine, but on its first test run it malfunctions, decimating Seattle’s banking district and uncovering a vein of Blight Gas that turns everyone who breathes it into the living dead.

Sixteen years later Briar, Blue’s widow, lives in the poor neighborhood outside the wall that’s been built around the uninhabitable city. Life is tough with a ruined reputation, but she and her teenage son Ezekiel are surviving until Zeke impetuously decides that he must reclaim his father’s name from the clutches of history.