I tried to do a bit of book shopping in San Francisco, but the books weren’t as cheap as I expected them to be (the UK Amazon is most of the time cheaper). I did come across a couple of books though of which I wonder whether I would have found them here in the stores. 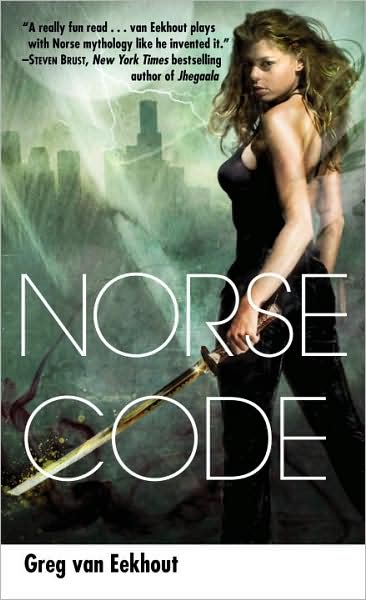 I had to groan when I saw the title of this book, but it actually looks pretty interesting:

The NorseCODE genome project was designed to identify descendants of Odin. What it found was Kathy Castillo, a murdered MBA student brought back from the dead to serve as a valkyrie in the Norse god’s army. Given a sword and a new name, Mist’s job is to recruit soldiers for the war between the gods at the end of the world—and to kill those who refuse to fight.

But as the twilight of the gods descends, Mist makes other plans.

Journeying across a chaotic American landscape already degenerating into violence and madness, Mist hopes to find her way to Helheim, the land of the dead, to rescue her murdered sister from death’s clutches. To do so, she’ll need the help of Hermod, a Norse god bumming around Los Angeles with troubles of his own. Together they find themselves drafted into a higher cause, trying to do what fate long ago deemed could not be done: save the world of man. For even if myths aren’t made to be broken, it can’t hurt to go down fighting…can it?

Near future, Norse gods, sounds good to me!

Norse Code by Greg Van Eekhout is available on Amazon.co.uk for £5.06.