A couple of weeks ago I got to participate in another Fringe conference call, this time with leading lady Anna Torv. 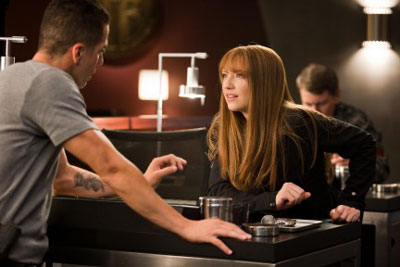 Q: I imagine when you play a role for two seasons, you become one with the character. When they asked you, then, to do a second version, what sort of acting challenges did that pose for you?

What I found has been interesting is how my attitude or how clearly I am now seeing Olivia, which I don’t think you do. I don’t think you get those opportunities where you actually get to step back and look at a character from a different perspective while playing the other. You keep trying to think, because you’re playing each—each of them has them has their own impression of the other that they haven’t met really properly. So, it’s been tough, but fun.

Also, I would have loved it if we had gone right out there and made her a completely different character, but essentially, the differences are subtle there. They both ended up in the same job. They both ended up to the point where they even had the same partners. It’s just gentle little shifts. It’s been fun. I think all the guys that have had that chance would say the same, too. It’s also been so fun to play on the other side, which does feel like, “Wow! This is a completely different energy.” Then, to pop back. So, I’ve loved it.

Q: What has surprised you about other Olivia on our side or our Olivia on their side?

A. Torv: I don’t even know where to start with answering that. I think everything. I didn’t know what they were going to do when they first opened up the prospect to this parallel universe. I really didn’t know. As I said, I’m looking forward to playing them as they are in their own world. I think that’ll give me a little bit more of an understanding. I didn’t answer that very articulately, did I? I guess, everything surprised me. Everything. 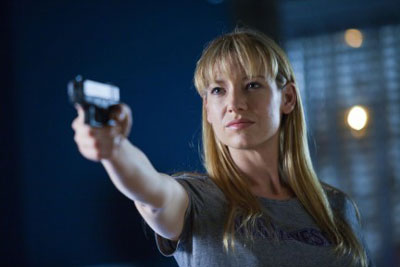 Q: Well, certainly the aspect of playing a relationship with Peter in character, that must be something surprising.

A. Torv: Right. I think that’s so fun, on the whole Olivia/Peter thing. Of course, you want them to be together. It’s set up that way, but what do you do when all of a sudden your two guys end up together? It then just becomes— What? Romantic drama or comedy. The fact that they’ve been able to kind of give a little bit of that and yet, it’s one step forward and ten steps back. I think it’s brilliant. Obviously, this is an assignment for Alternate Olivia, but Peter’s a charmer. I don’t know what she’s going to think after they’ve been together for a bit.

Q: Overall, what is it about Fringe that you like?

A. Torv: I like that it’s just so broad. It doesn’t fit in any particular genre. I think it’s scary. I think it’s kind of mystical. I think there’s sometimes we’ve had episodes that I think are really quite magic. I think there are parts of it that are really heightened. There’s parts of it that are really kind of down and dirty. It’s got humor and a little bit of romance. The fact that it’s so broad in its spectrum and in its stories and that it’s unafraid to go, “Let’s just take this leap, shall we?” We all go, “Yes! Let’s!” 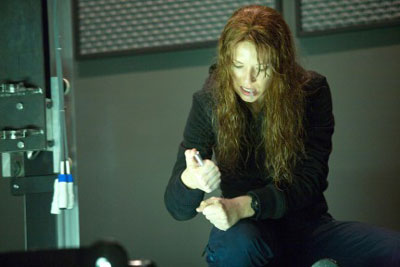 Q: Are there any particular topics that have fascinated you that you guys have covered?

A. Torv: Really early on—I think even the second episode or something—there was a case where Walter was talking about his research with William Bell where they were working at developing soldiers, seeing how quickly they could grow these—genetically engineer these soldiers. There’s been other ones since then, too, but any of that kind of like that real ethical fine line, it always gets me interested because I’m interested in that ethical and moral divide between humanity and science and how far can you take things for the greater good, and what is the greater good and what isn’t. Those bits always pique my interest.

Q: A lot of stuff last year was about how Olivia was very repressed, and she’s not in touch with her emotions. Now that you’re getting to play her, both versions of Olivia, much more emotional and open, is that a welcome change?

A. Torv: Absolutely, but I didn’t mind her being that repressed. I actually think that there was something—this sounds so counter-intuitive, but there’s something actually liberating in that. So often, you’ve got the guys that are the quiet, silent types that do all the tough stuff. Then, you’ve got the girls that are all emoting and chatting and talking about their feelings, working out their relationships. I think that that’s kind of one of the things that Fringe has always done different.

You’ve got the woman who doesn’t talk all that much, who’s extremely repressed, who just goes and does the job, doesn’t have much of a life at home. Then, you’ve got the two guys who sit around in the lab, which essentially is the kitchen cooking cookies and trying to work out where they stand with each other. I actually have always found that side of it interesting. Why can’t a woman be a little cooler in her emotions and a little quieter and a little repressed without it being a huge thing? So, I’ve actually always quite enjoyed that, to tell you the truth. Obviously, getting out of this pea soup has been a little bit of fun.