It’s weird how sometimes a book series grows on you. I initially only started the October Daye series cause I had read Feed (also Seanan McGuire but written as Mira Grant) and wasn’t that impressed by the first book. It was fun and okay, but nothing that screamed out at me “MUST READ NEXT BOOK”. I had already bought the 2nd and 3rd books second-hand though, so I thought why not go on with it and see what I think. By the end of the third one, I was at the “ooh, I wonder what happens next” stage. Now with the 6th one I’m totally at “AWESOME. MUST READ NEXT BOOK. WTF. I HAVE TO WAIT A YEAR?!?”. 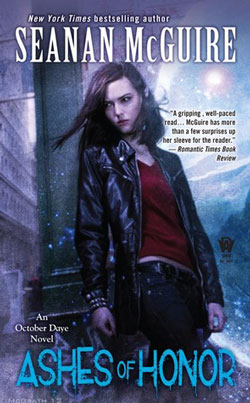 So Ashes of Honor is the 6th book in the October Daye series. If you haven’t read any of them, it’s an urban fantasy series about the half fae, half human private detective October “Toby” Daye. Toby is an awesome, kick-ass heroine, who only gets more awesomer as the series progresses. If you like urban fantasy, I can highly recommend this series (and as usual you should start at the beginning of the series with Rosemary and Rue… you also shouldn’t read further cause I’ll spoil some stuff from previous books).

In this latest installment Toby has to find the changeling daughter of fellow knight Etienne, a daughter he didn’t even know existed before she went missing. To make things worse the missing changeling also has the power to rip apart the world of Faerie, if Toby can’t find her in time. On top of that, trouble is brewing in the Court of Cats and Tybalt may need Toby’s help…

I thoroughly enjoyed Ashes of Honor. It’s yet again a Daye book that has Toby track down a missing kid, which she does with the supernatural help of the Luidaeg, but it still feels fresh somehow. The usual Toby supporting characters are all there: Quentin, Tybalt, May, the Luidaeg, Walther, Raj, Sylvester and Luna, plus we get to revisit some of characters from Tamed Lightning. Despite so many characters though the book doesn’t feel overcrowded; everyone is there for a reason.

It’s been a year since Connor died and Toby is still recovering from it. I’m glad though that McGuire has skipped forward a year, giving Toby enough time to deal with her loss, but not making the readers have to go through every single bit of it. At the start of the book Toby is still very much grieving and pushing people away, but throughout the book she slowly opens up again and let people in.

I love Tybalt and in this book he really gets to shine. I’ve always preferred him over Connor (honestly I was quite glad to see him go in the previous book) and Toby and him are great together. I quite like how McGuire is handling their relationship and so want to read more about them.

Duchess Riordan has been hinted as a potential villain in previous books and I’m glad we finally get introduced to her. I’m hoping we’ll see more of her, even though I’m not sure how that can be arranged after her fate at the end of this book. Who am I kidding? It’s Faery. Of course that will be possible. Plus she’s not the only character who I think we’ll see again.

I can’t believe I’ll have to wait almost a full year till the next comes out. McGuire has said she DAW have purchased 10 October Daye books in total from her, so there will still be at least 4 more books. The next Chimes at Midnight will be out next September. In the mean time, we can look forward to her next Incryptid book, Midnight Blue-Light Special, which will be released in March 2013.

Ashes of Honor by Seanan McGuire is available on Amazon.co.uk for £4.95 and on Amazon.com for $7.99.