Ever since I found out that Brandon Sanderson would finish Robert Jordan’s Wheel of Time series, I’ve been curious to see how his own series are. I still haven’t gotten around to actually finishing the Wheel of Time, mainly cause it feels like I need to start completely at the beginning (again).

I had already read one standalone novel from Sanderson, Elantris, but turns out it’s not completely a standalone… It’s part of an epic 36 book series, all set in the universe of Cosmere. Each book/series he writes is set on a unique world, but that world is set in the same Cosmere universe. All of the books share a single creation myth, a single cosmology and are connected by an overarching story. 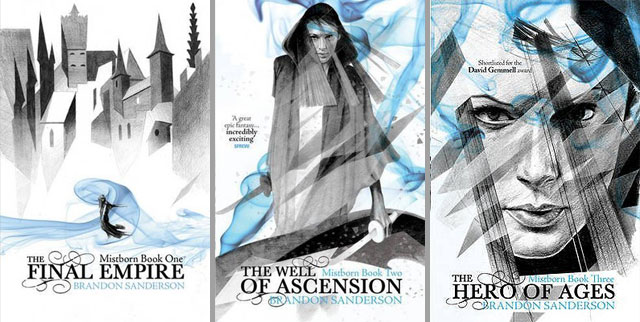 If that’s not enough to convince you, here’s the description of the first book:

A thousand years ago evil came to the land and has ruled with an iron hand ever since. The sun shines fitfully under clouds of ash that float down endlessly from the constant eruption of volcanoes. A dark lord rules through the aristocratic families and ordinary folk are condemned to lives in servitude, sold as goods, labouring in the ash fields.

But now a troublemaker has arrived and there is rumour of revolt. A revolt that depends on criminal that no-one can trust and a young girl who must master Allomancy – the magic that lies in all metals.

The books are available on Amazon.co.uk for ~£24.