I’ve been intrigued by home movie projectors for a while now. I always though that if they had been around when I was at uni, it would have been a better investment than a normal TV. Especially give the little amount of space I used to have in my student flat!

So when I got asked to review the BenQ W2000 projector, I knew this was finally a chance to try out and see one of these devices up close. 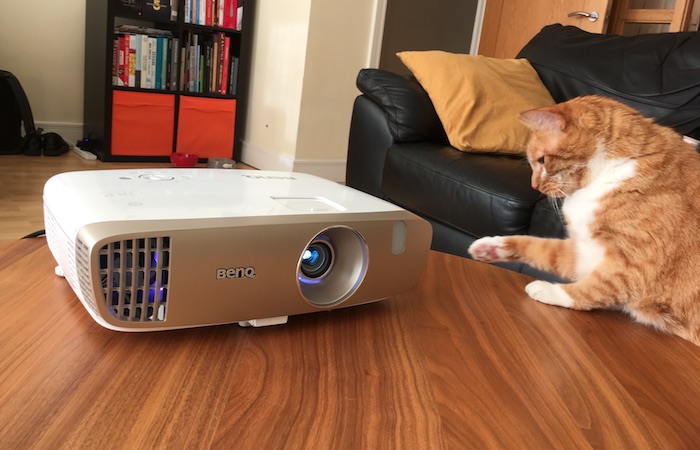 Initial thoughts: it’s a little bit bigger than I expected, but I’m really liking the picture quality of it! And the setup seems pretty easy so far. Turn on, plug in and that’s it. Compared to other projectors I’ve used in the past, the warm-up time of the W2000 was also quite quick: seconds rather than minutes.

I’ll be writing up a full review in a few weeks time – I’d love to hear what other questions people have? What do you want to know about this projector?

I love my mobile phone. It's one of those things that I'll always make sure I have on me, never leaving the house without it. At home it's never more than a few meter away from me, keeping me in constant contact with my friends, Twitter and other social networks. When I go out and on the go though, it's stuck in my bag, banished to the deep dark pockets of oblivion. I ALWAYS miss phone calls and text messages, and forget to check Twitter/etc. So I quite like the idea of having a watch that will connect to your mobile phone to keep you aware of these things.

The I’m Watch is a bluetooth smart watch with touchscreen that connects to smartphones to deliver calls, text messages, e-mails, and other apps directly to your wrist. It runs Android itself and should work with most iPhone and Android mobile phones. There are 3 versions: the Colour i'm Watch with a lightweight aluminium body and 7 different colours ($389), the Tech i'm Watch with a titanium body ($1049) and the Jewel i'm Watch with gold or silver body ($16990). I got sent an i'm Watch to try out myself and it looks interesting. I'm not sure this is the right fit for me, cause with my tiny wrists it looks a bit too big (see picture below). If you're going for a more geeky look though (and if you have normal wrists), I think it could look great. I'm very curious to see how this smart watch works. Sadly though at the moment I won't be able to use it with my current iPhone 5, cause Apple don't allow tethering on Giffgaff (seriously Apple, sort this out!). If you have an older iPhone or an iPhone 5 that does allow tethering/personal hotspots, you should be able to use the watch. I'll be trying it out with another phone next week, so stick around for my review!

Disclaimer: This is a sponsored post. I'm provided me with a black Colour I’m Watch for review purposes. All opinions are my own.