These photos from Annie Leibovitz are just stunning. They belong to the Dream Portrait Serie, an advertisement campaign from Disney featuring celebrities as traditional Disney characters. The first three images came out in January 2007, the second batch of three in October 2007 and the latest four came out this week. I’ve featured the photos I like the best first; while most of them are cool, there are a couple that just don’t work for me.

Update: I’ve added the latest photos of the campaign that were released in March 2011 here at the beginning of this post. Again they’re so gorgeous! It’s also interesting to see that Disney is using actors that are featured in their main live-action franchises right now: Olivia Wilde and Jeff Bridges were both in Tron, Penelope Cruz will be in the next Pirates of the Caribbean.

Update 2: I’ve again added the latest photos of the campaign. The Taylor Swift one as Rapunzel was released in January 2013.

Where A World of Adventure Awaits 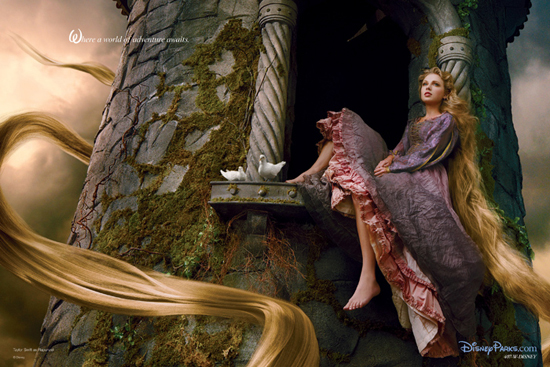 Taylor Swift as Rapunzel from Tangled Olivia Wilde as the Evil Queen, Alec Baldwin as the Mirror Where Another World Is Just A Wish Away Julianne Moore as Ariel (The Little Mermaid) and Michael Phelps as a random merman.

Where Every Cinderella Story Comes True Where You’re The Fairest Of Them All Where You’re Always The King Of The Court Where You Never Have To Grow Up Where Imagination Saves The Day Where The Magic Begins Where A Whole New World Awaits Jennifer Lopez as Jasmine and Marc Anthony as Aladdin

Where Wonderland Is Your Destiny Beyonce as Alice, Lyle Lovett as the March Hare and Oliver Platt as the Mad Hatter

Where Your Every Wish Is Our Command Whoopi Goldberg as the Genie

(Photos courtesy and copyright of Disney)