Review: Indiana Jones and the Kingdom of the Crystal Skull

I’ve given some thought into how I want to review this movie. On the one side I want to give my normal spoiler-free review, but on the other hand I want to go a bit deeper into it, singing it’s praises and nitpicking it’s faults. So I’ve decided to actually do two reviews. One for the people who haven’t seen it yet, so without spoilers, but a quick “is it any good or not?”. And one where I don’t have to care about spoilers, where I can just speak my mind mind about certain scenes, characters, etc. The review you’re reading now is the spoiler-free one; you can expect the other one in the next couple of days. 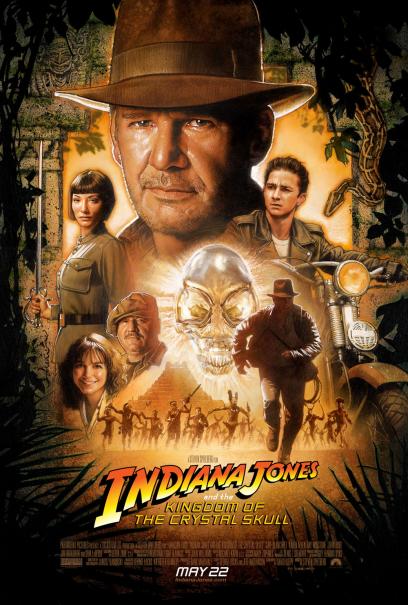 In Indiana Jones and The Kingdom of The Crystal Skull (from now on I’m just calling it Indy 4) 20 years have past since the previous movie; the year is 1957 and the United States and the Soviet Union are approaching the height of the Cold War. The film opens at a military warehouse in the Nevada Desert, where Indiana Jones (Harrison Ford) is coerced into helping the Soviets find a mysterious artifact. Led by Colonel-Doctor Irina Spalko (Cate Blanchett), the Soviets believe the Crystal Skull could grant them the ultimate power and Indy does what he can to stop them.

The opinions on Indy 4 are so mixed and I can understand why: this is not a film everybody will love or hate. While some people may be on the extremes, I think most will be caught in the big wasteland between, not completely writing it off and hating it, but also not proclaiming it as the greatest movie ever made. It’s been 15 hours ago since I saw Indy 4 (including a good night’s sleep) and I’m still analyzing and going over the movie in my mind, trying to figure out how I precisely feel about it. 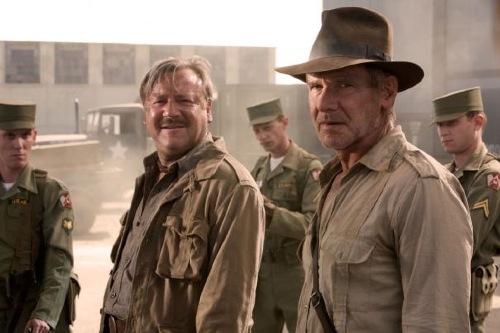 The best part of the movie are the action seqeunces. Indy 4 has some fun, exciting scenes and nobody can deny the brilliance of those moments. The car chase (this is not a spoiler, it’s an Indiana Jones movie, you knew there would be a car chase) in particular is exhilarating, except for some minor monkeying around. The whole film is beautifully shot, in and outside those action scenes. Indy 4 cleverly makes use of reflections and shadows, creating a visually stunning movie.

Acting wise the film is solid. The cast are all comfortable in their roles and you can see the delight they must have had while filming this. Harrison Ford may look his age, but his Indy is still as charming and kicking ass as no other. Spielberg and Lucas weren’t lying when they said the character would stay true to its roots. Indiana Jones remains the same Indiana Jones, even though he’s now a little older and slightly slower. I was expecting the worst of Shia LaBeouf, but his character Mutt Williams fit into the movie. I’m warming up to his performances and I do think he could go on to do great things (as long as one of them isn’t an Indy spin-off). Karen Allen literally lit up the screen whenever she was on; mainly because of a big goofy grin I couldn’t fail to love (I can see though that some people might find it irritating). Cate Blanchett is lovely as the evil Soviet agent. Yeah, lovely, not really a compliment for an “evil” character. While there wasn’t anything wrong with her performance, her character missed the intensity of the “bad guy” you love to hate. But that’s got more to do with the script than anything else. 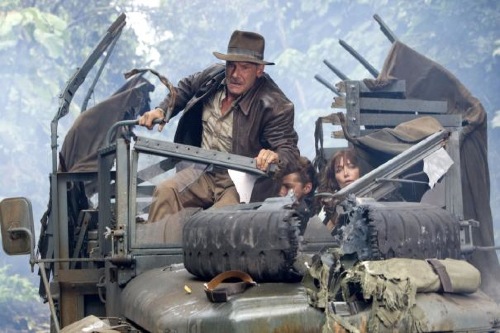 And that’s where the Indy 4 suffers: the script. I don’t want to spoil anything, so I’m not going to go into detail here, but the plot feels shaky at the best of times. Especially the last act is what withholds me from truly loving this movie. What I don’t understand is that the reason Spielberg and Lucas waited so long with making Indy 4 is that they were waiting for a “good” script. If this was a good script, how the hell did the bad ones look like?

I can’t say if you will enjoy Indiana Jones and The Kingdom of The Crystal Skull. This is one movie everybody must see, just to determine their own opinion on it. It goes without saying you should see it in the cinema; visually the movie is outstanding and for that alone I would recommend it. It’s a great summer movie and a worthy Indiana Jones movie, but I can’t help but wonder how will we look back at Indy 4 in 20 years time?