How I got into conference speaking

I’ve had several conversations in the past few weeks, where people are surprised to find out that I’ve haven’t been doing conference talks for that long. For some reason, most of them assumed that I’d been doing these talks for years and years, and that I’m a massively ‘experienced’ conference speaker. Spoiler alert: I’m not.

It’s only midway 2014 when I told myself I’d try to do a year of not saying ‘no’ to things that scared me, that I started putting myself forward as a conference speaker and started submitting talks to CFPs. That conference “season” I ended up doing Electromagnetic Field, DDD East Anglia, Hackference and Future of Web Apps; those were my first proper conference talks. It’s not that I hadn’t given presentations before that (I had done a handful of lightning talks the year before), but this was the first year that I was speaking at events where people actually paid to attend and see me (among others) speak. 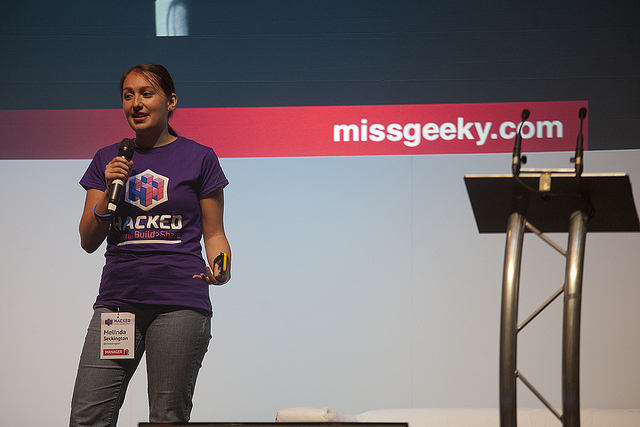 I realized that even though I hadn’t been doing conference talks before that, I’ve managed to do a ton of different things in the past years to slowly build the skills I now rely on. Public speaking is a BIG SCARY THING (for me it was at least) and if you had told me 10 years ago that I would be doing it on a regular basis and actually enjoy it, I would have called you crazy. So I thought I’d share my experiences about how I got to where I am today. This isn’t going to be a post with clear actions on what to do to become better at public speaking (there’s enough of those out there), rather it’s a collection of thoughts, memories and stuff from me about it all.

To make a cheesy analogy (cause all good posts need a cheesy analogy): giving a conference talk is like jumping off a diving board doing back flips into the pool. Sure, some people might have the guts to just jump off the board and see what happens. Others might do it and be immediately awesome at it. Me though? I had to learn the basics like how to not drown and how to dive. Plus I needed to psych myself up to climb that ladder and get on the board in the first place.

I hated public speaking. I knew that I couldn’t get away from giving presentations, but for years I always dreaded having to do them. I don’t remember the number of presentations I had to give at high school and university, but I do remember never liking them and only giving them when given no choice. Whenever we worked in groups, I was completely happy with letting someone else stand in the spotlight and talk about our work.

Everything about talks terrified me: having to speak in front of strangers, having to speak in front of a lot of people, coming up with what you are going to say, making sure what you say is sensible and delivering what you want to say in the best possible way. There are so many aspects to giving a good talk and all of them felt terrifying to me. I was the type of person that already felt uncomfortable with speaking to a random shop assistant when doing groceries, so giving a talk? Yeah. Not. My. Thing.

Attending meetups – how to talk to strangers

In 2007 Cristiano and I moved to London. We didn’t know that many people here, so we started going to meetups, conferences and other tech events. I still remember when I went to my first GirlGeekDinner and being so so awkward at it: standing in the corner, having no idea who to talk to and doubting whether anyone would even want to talk to me.

I’m a massive introvert, so networking, meeting new people, talking to strangers: it doesn’t come naturally to me at all. The more you do it though, the easier it gets. Even now I notice that when I haven’t done a meetup with new people for a few weeks, I need to get back into the right how-to-network mindset, like it’s a muscle I haven’t flexed for a while. Similarly if I’ve done too many events in too short a time, I’ll reach a certain point where I just don’t have the energy anymore to be social and deal with new people. And that’s okay. But you need to build it up, keep at it, and figure out what your own limits are.

BarCamp – you don’t need to be an expert

In that same year I got introduced to the idea of BarCamps, an unconference. Unlike normal conferences, where there are special speakers and a curated schedule announced before the day, with a BarCamp the schedule and sessions are created by all the attendees. Cristiano had been to BarCampLondon2 and we had both gotten tickets to BarCampBrighton later that year. At the time though I didn’t completely understand what a BarCamp was and what it meant I needed to do: only the day before did I realize that I HAD to do a session, which I interpreted as “give a talk” (later on I found out that “doing a session” could also be things like running a discussion or a show-and-tell; it didn’t necessarily have to be a presentation). I couldn’t deal with it: having to give a presentation with less than 24 hours notice? I broke down in tears and refused flat out to do it.

Despite that, the next day I still attended the BarCamp, fully expecting and dreading the disappointment of others when they found out I didn’t want to present. And then I actually went to some sessions… BarCamp is one of the most supportive and useful events that I’ve been to; it’s all about sharing what you know with others, no matter how knowledgeable you are on the subject. BarCamp taught me that everyone has something worth talking about: you don’t need to be an expert to talk about the things that interest you. Besides that, the informality of the event creates a relaxed and fun environment, meaning there’s no pressure to give the “perfect” talk.

From 2007 to 2010 I attended all the BarCamps that I could, attempting to do sessions at all of them. Most weren’t very good or that well prepared (case in point: this video), but despite that I know that people enjoyed them. Plus every single time, I got just that little bit better at speaking in front of people.

That first BarCamp I went to? I ended up making some slides during the overnight and gave a last minute talk on the second day.

Hackdays – how to present in front of a lot of people

The other type of event I started attending around the same time were hackdays (also known as hackathons, although I personally really prefer the term ‘hackday’, but that’s a post for another time). At these you form teams for an entire weekend/24 hours to hack something together. At the end of the 24 hours, everyone gets together to present what they’ve built. And depending on the type of hackday, there are various prizes people can win. 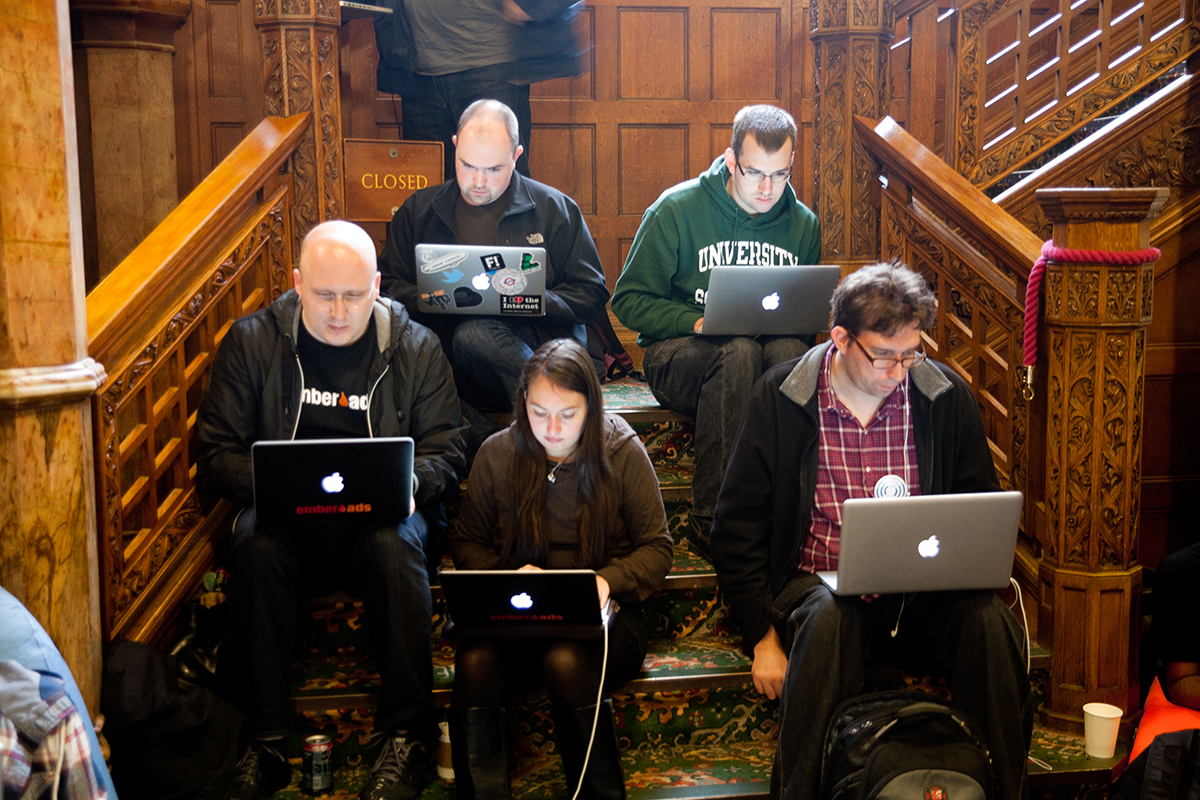 Hackdays are a great place to try out new stuff and learn new skills. Just like with BarCamps, most people are extremely supportive and willing to help you learn. The first couple of hackdays I went to I ended up forming a team with friends and let them do the presenting. But as I went to more of them, I ended up having more ideas and hacks that I was did on my own. There were several early hackdays though where I didn’t end up presenting what I built, mainly cause I didn’t think my hacks were good enough. Why show how little I got done? Eventually though I realized that didn’t matter: you had an idea which you worked on for an entire weekended and you should show what you have done!

Doing these short pitches is one of the things that got me comfortable with speaking in front of lots of people. You typically only have a 1 or 2 minutes to talk through your idea, meaning you learn to focus on getting your point across quickly.

Writing blog posts – how to tell a story

I admit: not every blog post on this blog is of the highest storytelling quality, but doing this blog for the past 8 years has taught me a couple of things. Firstly, the ability to recognize what makes a good blog post. There’s a little voice in the back of my head constantly going “Wouldn’t that work as a post?” or “What would happen if you combine this idea with that one? New blog post!”. With almost everything I come across a part of me is thinking about how to turn it into a story. And the same applies when considering talks. Not every blog post works as a talk, and not every talk works as a post. But being able to identify there’s a story there that’s worth telling is the same in both cases.

The second thing is the ability of actually telling that story. Throughout the years I’ve slowly learnt what I like and look for in blog posts, and how to apply that to my own posts. The key things I’ve found is understanding who your audience is, why they should be reading your post and what are they taking away from it. From there, you can derive the main structure of your post, framing the story in the right way. I could do an entire post on storytelling alone, but being able to write blog posts and tell a good story has been super useful in creating talks.

I guess what I’m trying to get at with this post is this: right now you might feel like you’re never ever going to want to willingly give a presentation. There might be different reasons and fears keeping you from doing them. Figuring out exactly what fears you have though means that you can come up with smaller and easier ways to get over them. Scared of talking to people you don’t know? Start going to meetups with friends and try to talk to 1 new person. Scared of talking in front of a lot of people? Try to find something lowkey that allows you to talk in front of a big group.

We need more diverse speakers in our industry. But that also means we need more people and more events to help create those speakers.

So here’s my slightly belated New Year’s Resolution: I want my 2016 to be all about helping others get into public speaking. To start things off, I’m mentoring next Saturday at ScotlandJS’s Diversity Workshop at the FutureLearn offices. If you have a talk idea and what help developing it, sign up and come along! Even if you don’t have an idea or don’t feel like you’re ready to give a talk yet, feel free to come to the event – doing the workshop doesn’t mean you’re committing to giving a talk.

Besides that I’ll be organizing another BarCampLondon this year with Geeks of London. We don’t have a date, a venue or any sponsors yet, but I know how much BarCamp helped me in the past and I think it’s an event our community needs. I’ll also be organizing more Thunderclouds this year to get more people comfortable with and learning how to do lightning talks.

Finally I’d love to hear from all of you! What are the things that you want help with or have questions about? Feel free to reach out on Twitter, send me an email or reply here in the comments.

Giving a talk can be a big scary thing, but maybe if we all pitch in and help out, we can make it not that big and not that scary.