Last week I managed to get tickets to a free screening of Daywatch (Dnevnoy Dozor), the sequel to the Russian cult movie Nightwatch (Nochnoy Dozor). Both movies are based on the books by Sergei Lukyanenko and that was the main reason why I hadn’t seen the first film yet. If possible, I always like to read book adaptations, before seeing the film, because you’re otherwise stuck with the film version in your mind, every time you read the book. In most cases once I create my own interpretation of the book, it won’t be affected by watching the movie.

With Nightwatch and Daywatch, however, I still hadn’t taken the time to read the books and a part of me is still regretting that decision. The world and mythology of the series seem quite complex and I think you’ll only grasp the whole idea of that world if you read the books.

So, first up: Nightwatch. After watching it, I did a little googling and wikipediaing to find out there are actually 2 versions. You have the original and the international version, and there are quite some notable adjustments in the international one to make the story clearer for a foreign audience. I watched the original and I really understand why there was the need for an international cut. The version I saw was at times extremely confusing, moving from one storyline to another without any clear indication. There were also subplots that only added to the confusion and I was glad to hear they had been cut from the international adaption.

In the world of Nightwatch you have “Others”, humans with supernatural powers (mages, vampires, shape-shifters), living among us. Hundreds of years ago there was a great battle between the forces of Light (the Goodies) and the forces of Dark (the Baddies), that ended with both sides signing a truce. To keep a balance between Good and Evil, the forces of Light roam during the daytime and the forces of Dark during the nighttime. Both are regulated though by representatives of the other side: the Daywatch consists of Dark Others supervising the Day and the Nightwatch consists of Light Others supervising the night. The story is set in modern-day Moscow and follows Anton, a member of the Nightwatch, dealing with the problems that arise during a watch. I can’t say more without giving too much of the plot away, but that’s basically the gist of it. 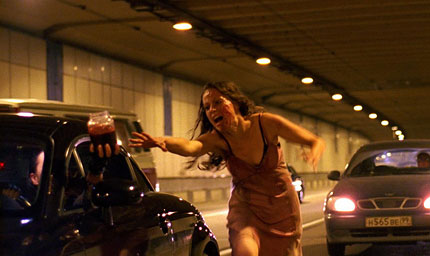 I did like the movie, but as I said before it was sometimes too confusing. I regularly had moments that I was going: “Heh? Weren’t we watching another girl? When did it switch to this girl? And who’s that guy?” If you know me, I rarely loose track of the plot of a movie, but with this one I had quite some trouble. I’m hoping the international version handles it better, cause on all other fronts the movie was quite enjoyable. The actors were chosen well, the special effects were great and the atmosphere of the movie just oozed “weird”. There were a couple of great subtle effects, like this faint wisp of red mist forming when a vampire moved. I think this was one of the first movies that didn’t portray supernatural beings as just plain corny.

Next: Daywatch. I can’t say anything about the plot of this movie without giving everything of Nightwatch away. I’ll only say that it’s again about Anton (yes, he survives Nightwatch, if I’ve spoiled the movie for you, boohoo, get over it). The plot of the movie was much better to follow than it’s predecessor, but then this was the international version (I wonder if the original version of Daywatch is also hard to follow).

I loved the actors, music and special effects even more in Daywatch, but that could also be from seeing it in a cinema instead of on a small tv. The special effects used in the end sequence were just amazing. I hate it when effects are too overdone, when you can easily see that they’re not real. Here they seem quite subtle, but the effect is superb. There’s one scene with half a building in rubble and I wasn’t sure which part was real and which part CGI. 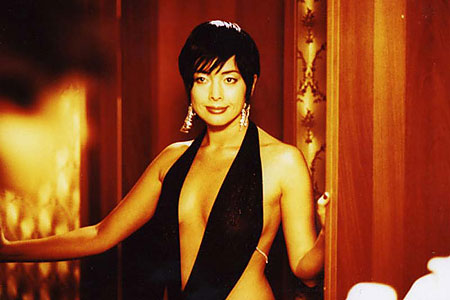 Extra kudos to the designers and artists behind the subtitles and yes, you read that right: designers and artists. The subtitles are unlike any I’ve seen before. There have been movies and tv-series that have a unique placement of the subtitles (Heroes) or show the subtitles in another colour (Kill Bill), but here the subtitles are very much a part of the whole experience. For starters, if there are two people on the screen, the subtitles will be placed under the person who it belongs to. Sometimes the words from one sentence wouldn’t appear all at the same time, but with some delay for extra effect. Another example is that words like dead or blood were coloured red. A more interesting instance was when one of the characters was drumming and one of the words in the subtitle was jumping up and down on the beat of the drum. All together, it gave a very unique experience to something as mundane as subtitles. Instead of only reading words, which sometimes causes you to miss the screen action, the subtitles are used to augment
what is seen and heard on the screen.

Both movies aren’t the typical Hollywood movie and they won’t be appreciated by every movie goer. The woman next to me, who was dragged along by her husband, actually said about halfway through the movie that she was bored! Well, I was many things during that movie, but I definitely wasn’t bored. For the guys reading this: in Daywatch there was this one shower scene kind of involving two woman and I don’t think I have to say more. There’s another great scene where a car is driven on to the side of a building (this sentence doesn’t even come close to describing what happened, you’ll just have to see it yourself).

If you like something different and are not scared off by foreign films, I really recommend this movie. This is definitely not everybody’s cup of tea, but if you like vampire/werewolf/etc movies and weird stories, you’ve got to check this movie out.