We Will Rock You

My mother was in town again, visiting with a friend, so last week we went to see We Will Rock You with them. And WOW! As much as Joseph disappointed me, this just amazed me. It’s really a unique experience.

A while ago I discovered that TFL offers special deals for Oyster card holders, like discounts for museums, restaurants and theaters. One of those deals were 2for1 tickets for We Will Rock You, so I was able to get 4 tickets for only £110. And the seats we got were pretty great: we were about halfwayish (row 11 from the 27) in the stalls, on the right hand side, but exactly next to one of the aisles. By the way, I only got the tickets the day before the show, so even if you’re a bit last minute, chances are there are still good seats available. 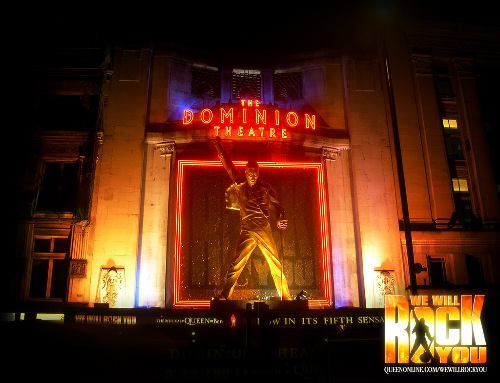 I didn’t know anything about the musical before going there and to be honest I didn’t have any expectations at all. Not in the sense “ooh, it’s not going to be good”, more of a “oh, a musical with Queen songs in it” and just stopping there with the line of thought. I mean, I never realized that like with the MammaMia! musical they would interweave all the songs into a story (I know, silly me). So that story really came as a surprise to me.

And what a story! Set 300 years in the future, Earth is now called ‘Planet Mall’ and everything is controlled by the Globalsoft Corporation. Everybody wears the same clothes, watches the same movies and listens to the same (cheesy pop) music. Musical instruments are forbidden and rock music is only known as a myth of the past. Teenager Galileo Figaro is a bit of an outcast; he has weird dreams and hears strange words in his head, most of which are lyrics of songs (which he doesn’t know though).

It seems like a silly plot, but it’s a great setting for all the featured Queen songs. Almost all the main hits appear in some form or another in here (for instance, Don’t Stop Me Now is cut short after a few lines). I never was much of a Queen fan (don’t know why, just never took the time to listen to their songs properly), but this musical has turned me around; I love the songs! 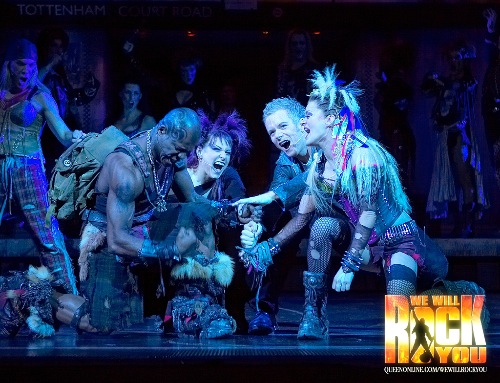 Another thing I didn’t expect was the humour in We Will Rock You. The jokes are mainly clever and silly one-liners, referencing pop culture, but some of them hit the mark perfectly. I can’t recall any exact examples, but at times the audience was completely in stitches.

We Will Rock You is a great, fun musical with songs a lot of people can sing along to (although it was a shame no one actually sang along until the last couple of songs). If you haven’t had the chance to see it yet, I highly recommend it.

Sidenote: a week before the musical I went to Mobile Geeks of London and the pub it was held at shared the same back alley as the back entrance of the Dominion Theatre. I saw most of the cast (without knowing at the time though who was who), but even cooler: Brian May! Anthony and Annie Mole both got some cool blurry photos.