The Dark Side – Sony Ericsson W595

In my blog post the other day about my week of madness, I mentioned the launch from 3 of the Sony Ericsson W595. And this is my write-up about that evening; an actual review of the W595 will follow some time later (once I’ve actually sat down with it and tried all the features out).

I wasn’t planning on going to it first, because it was arranged the same day as the London Blogger’s Meetup (and the Girl Geek Dinner Superstruct event, which I also had to miss). Luckily for me it was rescheduled to one week later: the same day though as the Mini GeekDinner and the day my parents arrived in town. Anyhow, I managed to get to the launch nicely on time, despite all the other events happening too. 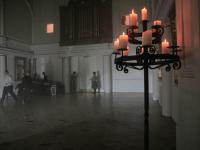 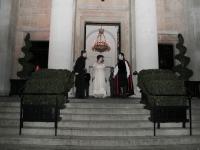 I was invited by the PR guys from 3mobilebuzz, whom I had previously met during some other events. Besides me, there were 3 other bloggers (2 of which I also had met before): Anthony from Fresh Plastic, Abul from adonismobile and Ben from Mobile Industry Review. The rest of the guests were (to be honest I’m guessing here, cause I didn’t actually talk to any of them) all actual, traditional press. That’s a first for me; I mean, I’ve been previously invited to special bloggers events, but nothing along side normal media.

The whole event revolved around the W595’s ability to upload videos directly to YouTube. To make it a bit more ‘special’, it was all about creating scary videos, giving the event a Halloween type of atmosphere. It helped that it was held at the Holy Trinity church at No 1 Marylebone (opposite Great Portland Street tube station); inside (even without the extra props) it’s pretty creepy. Next to that, there were some scary characters walking around: a vampire, a ghost/white lady, and some paranormal investigators. Ooh, and we were served The Dark Side cocktails with blueberry and vodka. Yumm! 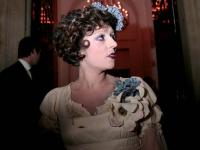 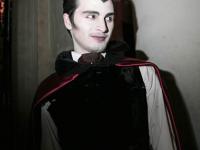 It all was pretty elaborate, in a cheesy, but likable sort of way. The event was split into two bits: First each guest got a personal hands-on demonstration from one of the paranormal investigators in how to make a ghost video with the W595. Because we were guests of guests though, we weren’t on the list and weren’t allowed to try out the W595 (because of time constraints).

The second part consisted of The Darkside Pod, an abandoned, rusty lift shaft. In groups of 2 or 3, you had to go sit in it and scary things would happen to you. What I didn’t know at the time though (must have missed it during the explanation) was that we were being recorded. Oops. We were giggling through out it, talking about how non-scary it was (I think one of us might have called it ‘lame’ at one point). Some of the funniest reactions are now on YouTube, like this one:

Last but not least, we all got a very cool goody bag. The main coolness goody: the W595. Sweet! It was bit weird though, cause during the whole evening we hadn’t even been able to see it, and then we’re allowed to bring one home. I’ll be doing a review some time next week (thinking of a video review, what say you, dear readers?), but I’m really loving this phone at the moment. Then again the one that I was using (also a Sony Ericsson) was already 2.5 years old, so anything new compared to that one looks good.

All in all, it was a fun event and an interesting way to launch a product. Thanks to 3, Sony Ericsson and the guys at 3mobilebuzz for inviting me!