Last Friday I was invited to a press event at Sci-Fi London for Dead Space Extraction, the Wii prequel to the popular PS3 and Xbox 360 game Dead Space. I still haven’t played Dead Space, mainly because I still haven’t got a PS3 or an Xbox 360 (I know, I know, I should get one), but it’s been high on my To-Get list once I’ve got one of those consoles. Needless to say (even though I hadn’t played it’s predecessor) I was curious to see what Dead Space Extraction had to offer.

At the press event, I got to meet Steve Papoutsis, the executive producer of the games, and Antony Johnston, the writer of the games and the prequel comics. They both held short presentations about their views on Dead Space Extraction, after which we got to see a live demo. 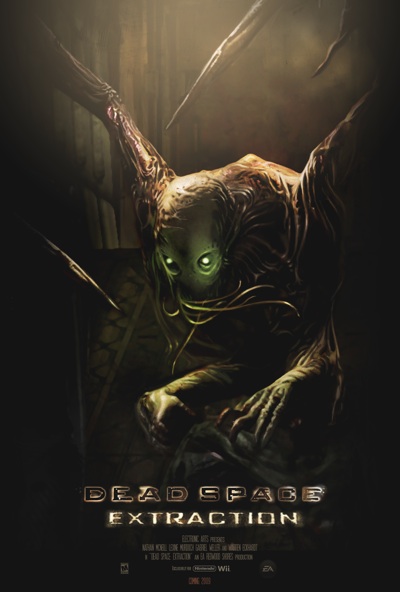 Dead Space Extraction is a prequel to the original game, taking place months before the events of Dead Space, during the infection of the colony. Your main protagonists are a group of 4 characters attempting to escape the colony: 2 security guards (McNeill and Warner, I tried to decipher my handwriting, so I think that’s what I wrote), a company executive (Eckhart) and an engineer (Lexine). It’s a stand alone game, perfectly playable if you haven’t played the previous one (or read the comic or seen the anime), but if you have, there are questions answered left hanging in the original and new secrets expanding the universe of Dead Space.

Unlike the original game, Dead Space Extraction isn’t a third person shooter, but something more like a rail shooter (as Steve Papoutsis put it “a guided first person experience”). Now this might seem a bit off-putting for some, but combined with the Wii controls it results in a great type of gameplay. Plus there are a couple of elements that differentiate it from a normal rail shooter, like some control over the camera for the player, the inclusion of puzzles and being able to choose different branching paths. Besides that, the game is designed to use the Wii controllers in a natural way to use objects. 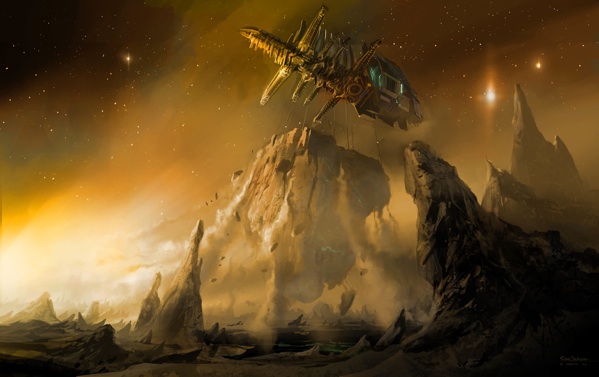 One cool example during the demo was the glowworm, a stick you have to shake to generate light, which meant of course you had to shake the Wii controller for it to go on. In one scenario, everything goes dark, while you’re being attacked by the Necromorphs. You have to decide if you want to shoot randomly in the dark, or take the time to shake your glowworm and generate more light. Another cool feature of this game was the option of drop-in co-operative play. With a single action, a friend can jump into your game and play with you together. No hassle!

I really liked the look of Dead Space Extraction and am now considering getting a Wii to be able to play this game. From what I saw from the demo the gameplay looks great. Plus it seems to have an interesting and intricate backstory. Now if only I could try out the original (and get a PS3)…