I first heard about Moon back in January, when the first reviews of Sundance came online. Everybody was gushing about it, and I’ve been looking forward to it since. Then in April I featured a trailer for Moon here on my blog; and I was even more intrigued. I finally got to see it last week and I was right to be so interested in this movie. This is one of the best sci-fi movies of this year (maybe even THE best) and it’s great to hear it’s getting a wider release here in the UK. 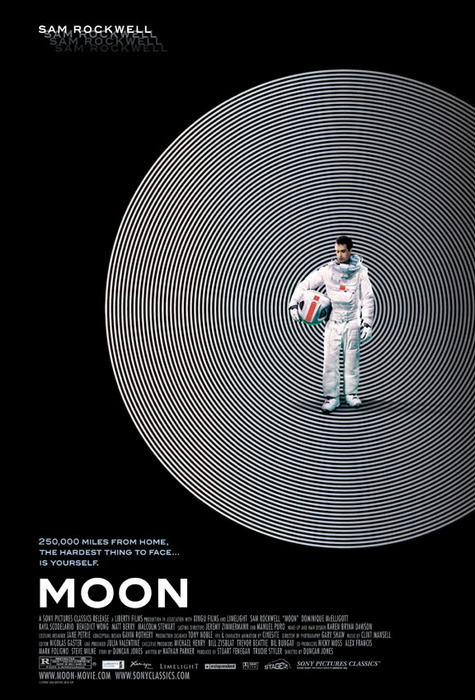 Moon takes place sometime in the near future, where scientists have discovered an alternative energy resource harvested from the Moon. Astronaut Sam Bell is an employee for Lunar Industries stationed on a lunar base to extract this resource and send it back to Earth. He is almost at the end of his three year contract, having spent the past three years without human contact, and only his robot Gerty as a companion.

I won’t say more than that, cause it’s mainly the story of this movie that’s interesting. I heard a couple of weeks back that the trailer “only shows scenes from the first 15 minutes of the movie”. That’s not entirely true; I think it’s more like 20-25 minutes. Still the trailer doesn’t spoil it at all, and that’s what I love about Moon. What might have been the end/climax of most movies is here only the beginning.

Moon is very much an intelligent sci-fi story about the moral consequences and dilemmas of a “What If” situation. It moves pretty slow, and harks back to those sci-fi movies of old, like 2001: A Space Odyssey and Outland. Everything unfolds slowly, moving at its own leisurely pace. For some, this might feel a bit tedious, but I think it added to the charm of the movie.

The visuals are pretty stunning and it feels as if it’s shot on a much larger budget than is actually the case. The outside moon landscape scenes were mainly shot with miniatures and it’s refreshing to see that again instead of CGI. Except for one scene at the end, I thought it all looked fantastic. I also should mention the music; the score from Clint Mansell adds very much to the effect of the overall movie with some hauntingly beautiful tunes.

Sam Rockwell’s acting is the highlight of this movie. He carries Moon on his shoulders and without his strong performance the entire movie would come crumbling down. I can’t go that much into depth without giving too much away, but believe me when I say his performance is extra special.

Moon is one of the most interesting movies this year so far and I think it could be the best sci-fi movie of the year (although we’ll have to wait for 9 and District 9 first before I can claim that). It’s got a great, intelligent story and goes beyond your standard space plot. Highly recommended!

Moon – Out now in cinemas