A month ago I got invited to a blogger/twitter screening of (500) Days of Summer, and I was gutted to discover it was on the same day as our Mozilla GeekDinner. Luckily for me though that wasn’t the only screening, and last Monday I was able to head down to Fox’s Soho screening room to finally see this movie.

(500) Days of Summer is about the relationship between Summer Finn (Zooey Deschanel), a girl who doesn’t believe in love, and Tom Hansen (Joseph Gordon-Levitt), a guy, who strongly believes in true love and The One. 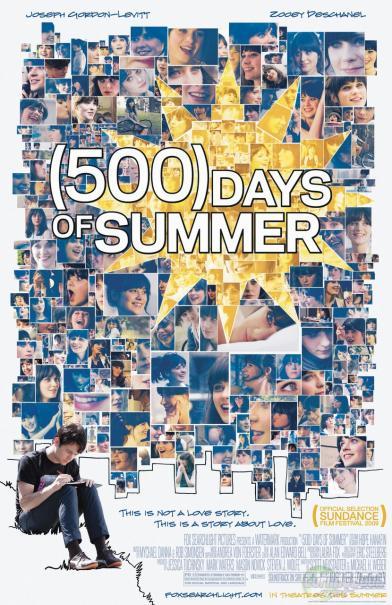 “This is not a love story. This is a story about love” That’s the tag line of this movie, and it’s exactly what this film is about. It’s about 500 days of Summer’s and Tom’s relationship, including all the ups and downs. It’s one of the sweetest and most beautiful movies I’ve seen this year, and I know it will be one of my rainy day comfort movies for many years to come.

The writer of this movie deserves an Oscar, cause the way this was put together is remarkable. Instead of following a linear story line, the movie is presented in a non-chronological format, jumping back and forth between different points of the relationship. Each scene starts off with a {}, showing which of the 500 days it is. It’s a refreshing way of putting things in perspective; you don’t remember everything in a linear fashion, and sometimes initially you might only remember the good stuff.

There’s also a lot more quirky storytelling elements/cinematography in (500) Days of Summer, which I adored. I’m not really sure how to describe some of my favourite scenes here without giving too much away. To not spoil too much, one example is of an early scene where the narrator (oh, yeah, there’s also a narrator, it gives the movie almost a fairytale-like edge to it) tells you what type of girl Summer is, and it’s done in this black-and-white fifties education video style. There are more of these special type of sequences, which are just so amazing and give the movie a unique twist. 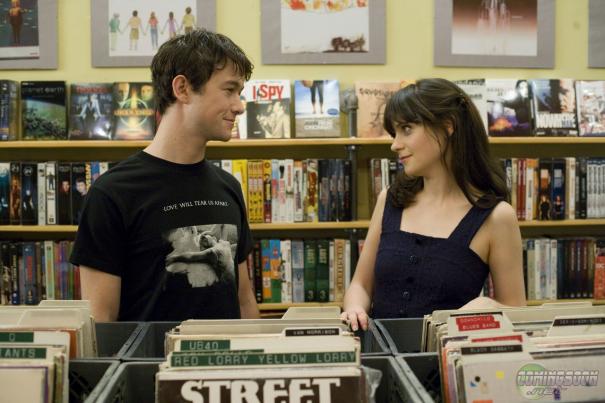 Both Joseph Gordon-Levitt and Zooey Deschanel are fantastic in these roles. Joseph Gordon-Levitt brings a great range of emotions to this role and you can help but empathize with him. I have a feeling we’ll be seeing much more of him in the future. Zooey Deschanel is adorable as Summer. I’ve always liked her, but I’ve never really liked any of the stuff she was in, until now. It’s great to see her in a role as wonderful as this.

One more thing I have to mention about this movie is the style. The music, the clothes, the hairstyles, I loved it all. While it may not be everybody’s cup of tea, I was so jealous of Summer’s look. Some of the (vintage?) dresses she wore were just gorgeous, and I love the bows and hairbands she had in her hair throughout the movie.

(500) Days of Summer is a great romantic comedy, but not in the traditional sense. As the tag line says, this is a story about love, not a love story. And yet, it is one of the best cinematic romances I’ve seen in a long time. This movie is quirky and cute, and one I’d definitely recommend to everyone.