Ever wanted to own a prop of your favourite TV show? If Dollhouse was your fave, here’s your chance. Priya’s painting from Sierra’s background episode “Belonging” is on auction on eBay to raise money for charity. The proceeds will go to the Childrens Hospital Los Angeles, a nonprofit, academic, pediatric medical center. They provide the highest quality healthcare for children who are the sickest and most seriously injured in the Southen California region.

From the eBay page:

During the filming of the episode Michael Voelker, who works in the art department as a set dresser, brought his son Hunter to set.  Hunter Marlowe Voelker is two years old and was recently diagnosed with ALL (acute lympoblastic leukemia).  He is an adorable, positive kid and to call him a trooper doesn’t cover it.

Anyway, we were standing around the painting a few days later, talking about what would happen to it when the show was done.  Would it fit in our living room?  And then we got on the subject of the devoted, pro-active fans of the series and how they would love to own this.  Maybe we could auction it off!  For a bunch of money!  And then use that money to build a private glow-in-the-dark jacuzzi water-slide park in our back yard!  Or we could give it to charity, I guess…

At the moment, the bid for the painting is $4350… so does anyone have at least $4400 available? Here’s how the painting looks like :

BEWARE – after the photo are SPOILERS for the Dollhouse finale 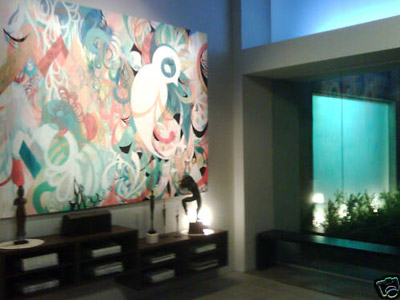 So have you seen the Dollhouse finale yet? The penultimate episode with the current day wrap-up was a bit of a letdown for me. Some great acting especially from Enver Gjokaj (Victor) with a return of his Topher-Victor. Man, that guy can channel other actors eerily (found out he’s actually playing the young version of Robert de Niro in the upcoming Stone, can’t wait to see that). But most of the plot just felt rushed and clunky.

The last episode though? That was awesome. It wasn’t perfect, but I loved that it at least had a complete full circle story. Things I liked:

Topher. I loved him from the beginning. Even though he was bit annoying at the start, he was the only one with funny lines and the only character that, well, showed character. Through the last season he became a more sympathetic character. That final scene with him and Adelle was so sweet!

Victor and the Mad Max rebels. It might have been a little over the top, but it was interesting to see how they used the tech and had adapted to it. Plus the whole Priya/Victor thing was interesting to see, especially cause we got to see the consequences of their decisions from the previous episode.

Ballard getting shot. I should have expected something like this from Joss Whedon. It didn’t hurt as much as previous of his ‘killings’ (Angel, Doyle, Wesley, Wash, Penny and more), I think I as a viewer wasn’t as invested in Ballard as in other characters, but it was still heartbreaking to see the effect it had on Echo.

Things I didn’t like: the Ballard/Echo ending (kind of sweet, but also kind of creepy if you think it through). The all-powerful MacGuffin that solved the entire brainwiping in one go. I wish we could have seen more of the future world, and I wonder how this show would have continued if Whedon had gotten more seasons.

So that’s it for Dollhouse. What’s next for Whedon I wonder?