Movie Review: Clash of The Titans

I don’t write about it that often here on this blog, but I’m a bit of a Greek mythology geek (and also other mythologies, like Egyptian, Roman and Norse, but mainly Greek). I love reading all the different tales about the Greek gods and heroes, and it’s the main reason why I went to ‘gymnasium‘ (Dutch high school type), so that I could have learn Latin and Ancient Greek. So I’ve got a bit of a soft spot for mythology movies, but am also waaay more quicker annoyed when they don’t get their mythology right. As in Clash of the Titans.

Clash of the Titans is the remake of the 1981 movie with the same name. It features Sam Worthington as the halfgod Perseus, who wants revenge on Hades (Ralph Fiennes) for killing his family. When the city of Argos is threatened by Zeus (Liam Neeson) and Hades to sacrifice their beloved princess Andromeda or risk the wrath of the Kraken, Perseus swears to defeat the Kraken. Together with a small group of soldiers and the immortal Io (Gemma Arterton), Perseus embarks on a quest to save Argos. 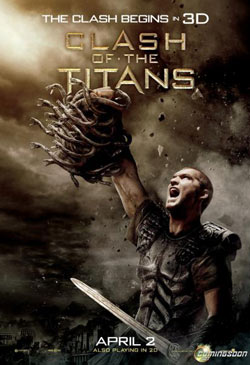 I know most people won’t care about the accuracy of the mythology while seeing this movie, but for me it was a serious annoyance. It’s like changing the basics of a fairy tale (hey, let’s add one of the seven dwarfs to the Rapunzel story!). Some of the mistakes I can forgive, cause they were remaking an older movie. For instance, the fact that there aren’t any Titans in either of the movies, yet the movie is called ‘Clash of the Titans’ can be blamed on the 1981 one (Titans were the gods before the Olympians and not one of them appears in this movie). Same with the ‘Kraken’; this newer movie took it from the older one, but the Kraken never was in the Perseus myth. Hell, the Kraken never appeared in any Greek myth… he’s from Norse mythology.

Besides those mistakes though, this Clash of the Titans messed up the story even more. For starters, Io. I understand why they added her to the story: to add a female heroine to the epic journey, because Andromeda is stuck in the city the entire time. But why Io? Haven’t they done any research at all? She’s Perseus’s ancestor. Turning her into a love interest just felt wrong. Then there’s Danae (Perseus’s mother) and her husband King Acrisius. Eh yeah, no. In the myth they’re father and daughter. Finally, most of the main story was just complete nonsense. The 1981 movie was a loose interpretation of the myth already, and now this movie was loosely based on the 1981 movie. Somewhere in the process it turned out not bearing any resemblance to the myth at all. It could have worked, if the story actually was interesting. But to me, it felt like huge action sequences with bits of dialogue and ‘plot’ to string it all together. 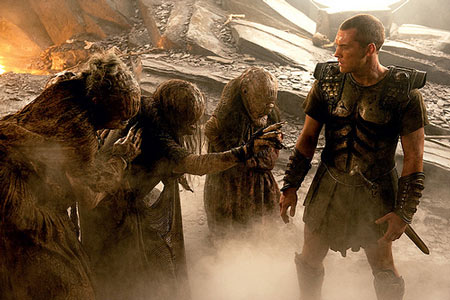 There’s no character development in this movie whatsoever. Perseus is basically whining the entire movie that ‘gods killed his family’ and that although he is a demigod, he’ll slay the Kraken as ‘a man’. Okay, Hades killed his family, so he’s got a reason to be pissed off with that god. But with all the gods? And not to use his demigod-ness while they have such a short period to save Argos? It also doesn’t help that Sam Worthington fails to give Perseus any charisma or likability; I still don’t see what people see in that guy. Liam Neeson as Zeus get some of the worst dialogue and some shiny CGI armor (it’s Twilight sparkly armor). I had hoped more from him here, but Zeus wasn’t impressive at all. And also goes through some wishy-washy-ness; releasing the Kraken on the humans, yet giving Perseus the tools to defeat the Kraken. It all just doesn’t make sense.

The action scenes and the CGI is one of the things I actually did like in this movie. I admit I’ve seen better (we all have), but it was still enjoyable. The big-ass scorpions were cool, even though I first didn’t realize there were more than 1 (was that just bad editing, or wasn’t I paying close enough attention?).

And then there’s the 3D. In one word: DON’T. The 3D here wasn’t necessary at all, and doesn’t give anything extra to the movie. I didn’t find it as annoying as some people were saying (it didn’t feel like paper cutouts, which I did have with the last Harry Potter movie), but it’s still not worth paying the extra money for.

I also wonder how much ended up on the cutting table. We got one or two glimpses from the other Olympians, like Artemis and Aphrodite, and it seemed like they put quite a lot of effort into creating their characters. But besides Zeus and Hades, they barely say anything (Poseidon and Ares get like one line each). I wish we could have seen more of the other gods.

Clash of the Titans isn’t a movie I’d recommend seeing in the cinema. If you’re going for only the action scenes, then enjoy. But if you’re hoping for a good story, full of heroes and gods, then give this a miss.