I’ve been mainly playing Final Fantasy XIII the past weeks and those of you who follow my tweets will know how frustrated I am by it. It’s not that it’s a bad game, but I really don’t like how linear FFXIII is; the first 30 hours there’s basically only 1 way to play the game. So when I got a review copy of Rune Factory: Frontier, it felt like the perfect antidote to the linearity of FFXIII: this game is so open and non-linear, there are tons of ways you can play it. 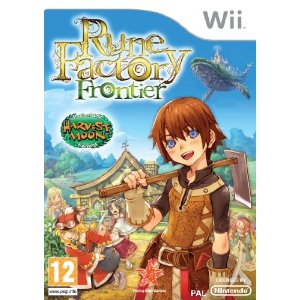 This game starts with your character Raguna waking up to discover he has amnesia (of course). He moves to a new town, gets his own farm and some tools to start farming. Oh, and you get introduced to a bunch of girls, who you can potentially woo and marry. There are barely any forced tutorials or anything like that; the game just lets go and gives you the freedom to do whatever you want.

You start the game with the main activity of farming. You get a couple of seeds, a hoe and a watering can, and your own little field where you can sow and grow your crops. After sowing seeds, you have to water your crops once a day, until they are fully grown and you can harvest them. It of course depends on the type of seeds how many days it takes for them to grow; turnips (the seeds you start the game with) take 4 days. One minute in real life is one hour in the game world, so 24 minutes is one day. 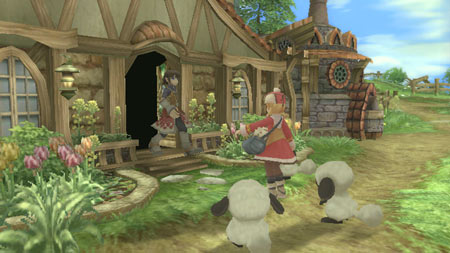 Next to farming, you can dungeon crawl. You can buy a proper weapon (like a sword) or you can be cheap and use your hoe. Either way you can start dungeon crawling and destroying monsters straightaway (well you’re not actually ‘destroying’ them, you’re sending them back to the First world or something like that). Besides those two main activities, you can also learn to do other stuff, like cooking and fishing, but you have to find the right tools to start those (mainly by talking to the right people).

And then there’s the ‘love’ game. There are twelve girls in the village you can woo (and eventually end up marrying), each with different likes and dislikes. Each of them (and each of the other NPCs you come across) has a “Love Points” bar that increases as you show them affection. You do this by giving them presents they like (for instance, one girl might like turnips, another one roses). The girls are a bit stereotypical (you have the librarian, the inn keeper’s daughter, etc), but it’s still a lot of fun, figuring out what to get for each of them.

Rune Factory: Frontier is a cute RPG and one that requires more than a few hours of dedication. I love how much freedom the game gives you, letting you focus on those parts of the game that you like (instead of having to do everything). It’s perfect for someone as neurotic as me, trying to collect and create all the items (seriously, if I didn’t have video games, I’d be a crazy cat collector or worse: stamps).