I got invited to participate last week in a conference call with Joss Whedon about him directing this week’s episode of Glee. The episode is called Dream On and guest stars Neil Patrick Harris, Idina Menzel, and Molly Shannon. The wifi flaked out on me, so I didn’t get to ask anything myself, but I’ve written up the more interesting questions for you.

The interview is about yesterday’s episode of Glee (in the US), so beware there are a couple of (tiny) spoilers in it (mainly about set pieces and dances).

Q: What was it like directing someone else’s show?

Joss Whedon: Directing somebody else’s show is – I’ve done it once before, twice just with The Office. It helps if the show’s unutterably wonderful. That takes a lot of the pressure off. It’s a little tricky. You’re living in somebody else’s house and you have to make sure that you’re fulfilling their needs. It also takes some of the burden off you. You don’t have to be the guy who sees the big picture. You just take what they give you and make sure that you’re servicing it as best you can. Having said that, Glee is probably harder to shoot than any other show in recorded history, with all the different elements going on and whatnot; it’s a different kind of challenge, but ultimately enormous fun.

Q: What were you able to do with the dance number that maybe you weren’t able to do in your other musical episode from Dr. Horrible?

Joss Whedon: Well, dance would be one thing. There’s more real hard-core dancing in the show, not in every number. Some numbers are just about movement. Then I get to be seriously involved in creating that movement. Then some numbers are real dance numbers and that’s all Zach Woodlee and Brooke, the choreographers, they’re phenomenal. There were numbers that I didn’t know exactly how they worked narratively until I saw the choreography and then said, oh, this all works just fine. I got to really shoot some fun dancing and most of the stuff I’ve done has been more just movement.

Q: Could you talk about the dance number, the mall number. How did that fit in? Was that the most difficult?

Joss Whedon: You know, the thing about that number is that really was Zach and Brooke getting it done. Ultimately, it’s a complicated, it’s a big, big number, very gratifying, I think because we’re seeing things we haven’t seen before. I do pride myself on being the guy who knew we were actually going to be able to shoot it pretty quickly because once it gets dialed in, you pretty much just shoot them doing it. Because of the number of extras and the enormity of the number, people thought it was going to be much more of a bear than it actually was. We had two film cameras and four video cameras going the whole time, so the thing actually went pretty quickly. We were able to tack on another scene that day, which is great, because those schedules are a bear. 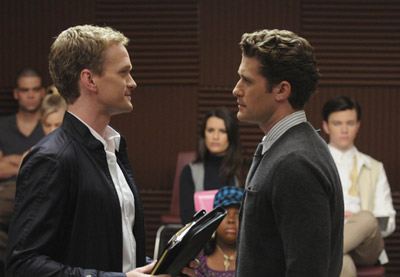 Q: What was it like working with Neil again?

Joss Whedon: I am so tired of that guy. Why do they always make me direct Neil? Why the pain? Neil is a consummate pro and a dear friend, which is an ideal combination. There’s no problem. My only complaint was that I wanted to shoot even more of the kids than I got to, that and certain craft service issues about not having caviar, but really that’s in my contract, actually.

I feel like he’s one of those people who expresses the way I wish I could express myself. He’s like a muse, and he’s friends with Matt. The sort of rivalry/affection between them just informed the whole thing so much. We had such a good time. He came in the day after the Oscars, the day before How I Met Your Mother. He fit this into his schedule in the most bizarre fashion. I even got him and Jane Lynch to come in late on Friday night after finishing How I Met Your Mother, just so that we could knock a scene off because the schedule was so hard for him. Always cooperative, always imaginative; Neil’s the man.

Q: Can you talk a little bit about how much fun you had doing the flashbacks and how collaborative you guys were about what Neil was going to bring to this episode.

Joss Whedon: You know, Neil’s great because he looked at the script. He was very excited. He had some very specific questions even based on the vocal arrangements, what kind of guy am I supposed to be. So, it was a real collaboration. As for the mullet, there was definitely some talk about “Isn’t that kind of the ‘80s, I mean, it’s sort of the ‘90s, what’s with the mullet?” Sean Ryan, without missing a beat said, “Achy Breaky Heart was ’92.” So, he’s really on top of his game.

Joss Whedon: I’m going to just go ahead and make a blanket statement. I don’t want to direct the shows I’m a fan of anymore. It means I always have to read the episodes that come before it. It’s like a giant slew of spoilers that quite frankly is not fair. I would say after Glee, Friday Night Lights is probably the show that blows me away the most. But, I definitely don’t want to direct one of those, because I’m still on Season 2. 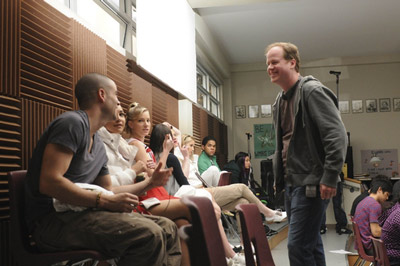 Q: Obviously the show has its own plot line, it’s well underway. Were you involved at all about the song selections for this episode?

Joss Whedon: Oh, no. They select the songs well in advance. They give you the script, not quite as well in advance, but much longer than I usually give the script, actually… You’re there to service what they’ve already thought up. Quite frankly, I felt very fortunate. First of all, because I actually knew all the people, which is not always the case. I think a lot of people feel that because I’ve run shows that I was going to go in there and be working with them on it. But, honestly, I am just a visiting director in this situation.

I would definitely give my thoughts, “Oh, I feel like the song should go like this, is there any way we can change on this line,” little stuff like that, trying very hard not to overstep. I certainly wasn’t about to say, “Oh, do this on one, well I may not get the rights to one song, and so I’d like to get another.” That would be the only thing. This really is Brad who wrote it, and Ryan and Ian. This is their world and I’m privileged to walk in it. But, I’m not going to walk all over it.

Q: I just wanted to know how Glee was different from anything else you’ve ever worked on.

Joss Whedon: Glee is different from anything else period. Every show is different. I would just say that the enormous amount of work that everybody is doing at all times on that show kind of spun my head around. It’s not an easy show to make and the kids, the whole cast works so hard and are busy working on every episode. So, really, I don’t remember we’re shooting four episodes at once. It’s hard to keep your head around all of it, the rehearsals, the recording, and the show moves as quickly as it moves. Production is tough and you have to be on your feet at all times. You’ve got a different aesthetic, an old-fashioned aesthetic in the lighting and the camerawork is very classical. It’s not edgy in that sense. The edge comes from taking a very comforting milieu, the comfort, and ease of set, and then putting something rather kind of shocking. Either shocking because it’s so snarky, or dirty, or funny, or because it’s just so open hearted in the middle of it. 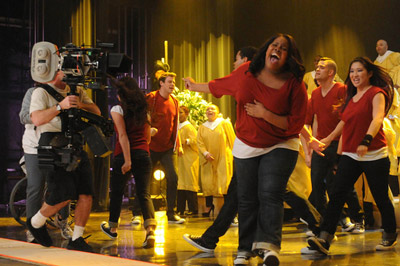 Q: Could you talk a little bit about how you approach music from a visual narrative standpoint? How are you able to work that?

Joss Whedon: When I approach music, obviously, if it’s a dance number, some of the work is done for you because you pretty much know where you want the camera based on the movement. If it’s just about movement, then I approach it very strictly from the narrative of the emotion. Particularly in “Dream On” and “I Dreamed a Dream” I got to pitch my own movement and my own staging for those numbers to try to work in all the emotional elements and emotional reality of the thing, and at the same time, keep it kind of fluid and keep it exciting. It’s one of the great joys of the show to be able to do that. Then to have the actors respond and to understand and just take what you thought up to the extreme. It’s kind of the same way you block a scene, you’re just looking for emotional reality and visual panache, except it’s way more fun because there’s music.

Q: You obviously did a musical episode of Buffy, the Vampire Slayer. How does that compare to Glee? Did it prepare you in a way?

Joss Whedon: Oh, yeah, oh, yeah. Doing Buffy and doing Dr. Horrible were both great prep for something like this. This is obviously not my first rodeo. It’s different, Glee, obviously, but knowing a little bit of the realities of the difference in a day’s work between shooting a musical number and shooting just a regular scene, is very useful. It’s the kind of thing that I would like to spend a lot more of my time doing. I love musicals deeply and dearly. This was a return to home for me. Not my home, but a very welcoming one.

Q: So, would you do another episode of Glee in the future?

Joss Whedon: “Nevah, nevah.” Oh, yeah, I choked, totally. Sorry. If I had the window and they would take me, yes, in a heartbeat.