The Hundred Thousand Kingdoms is about Yeine, a 19 year old girl, who wants nothing more than a normal life in her homeland of Darr. But her mother was of the powerful Arameri family, and when Yeine is summoned to the capital city of Sky a month after her mother’s death, she cannot refuse. Dakarta, her grandfather and the Arameri patriarch, pits her against her two cousins as a potential heir to the throne. 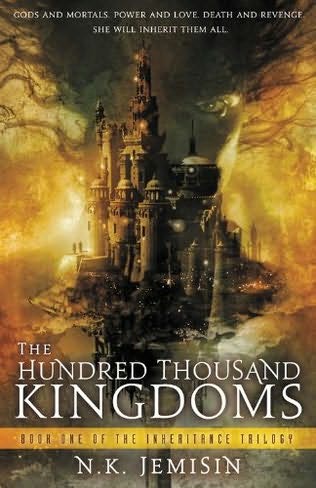 This book was awesome! The description above doesn’t do the book justice at all, yet it’s so tricky to explain this world of the Hundred Thousand Kingdoms. It’s so complex and rich in mythology, and one of the great parts of the book is slowly discovering the different facets. Yeine doesn’t know anything about the world of the Arameri and we, as readers, slowly discover as she learns about her heritage. Jemisin has managed to tell a unique origin story of the gods of this world, and it doesn’t compare to anything I’ve read before.

In short, the backstory told at the start of the book is this: there were once 3 gods, who lived in harmony, Bright Itempas, the Nightlord Nahadoth and the goddess of twilight and death, Enefa. But Itempas was betrayed by Enefa and Nahadoth, so he killed Enefa and enslaved Nahadoth. Nahadoth and his 3 god children all got trapped in mortal bodies and were given to the rulers of the Hundred Thousand kingdoms to be used as weapons. Yeine soon encounters these ‘weapons’ at her grandfather’s court, who have to obey everything the ruling family says.

The story is told from Yeine’s perspective, albeit a bit of a weird perspective. From the start, you know there’s something not completely right. For instance, here are the first couple of lines from the book:

I am not as I once was. They have done this to me, broken me open and torn out my heart. I do not know who I am anymore.

I must try to remember.

My people tell stories of the night I was born. They say my mother crossed her legs in the middle of labor and fought with all her strength not to release me into the world. I was born anyhow, of course; nature cannot be denied. Yet it does not surprise me that she tried.

My mother was an heiress of the Arameri. There was a ball for the lesser nobility — the sort of thing that happens once a decade as a backhanded sop to their self-esteem. My father dared ask my mother to dance; she deigned to consent. I have often wondered what he said and did that night to make her fall in love with him so powerfully, for she eventually abdicated her position to be with him. It is the stuff of great tales, yes? Very romantic. In the tales, such a couple lives happily ever after. The tales do not say what happens when the most powerful family in the world is offended in the process.

But I forget myself. Who was I, again? Ah, yes.

And it continues like that throughout the book. Yeine will be telling you something and she’ll suddenly interrupt with a completely different thought or tell you about another event. It doesn’t happen too often for it to get annoying; it only makes you more interested in what happened to her.

I loved how different this book was; the gods, the world, everything just works in this book. It’s the first part of a trilogy, but I don’t think it’s trilogy in the usual sense; the 2nd seems to be set in the same world, and will continue the story, but with different characters. Intrigued?

If you’re not convinced yet, you can read the first three chapters on the author’s website.

The Hundred Thousand Kingdoms by N.K. Jemisin is available on Amazon.co.uk for £5.58 and on Amazon.com for $10.07.