Interview: Tim Roth on Lie To Me

Last week I got another great opportunity for a conference call, this time with Tim Roth from Lie To Me. I was really looking forward to this, especially cause my thesis is based on the work of Paul Ekman, the psychologist on which Tim Roth’s character is based. I messed up completely though and failed to make it to a computer to catch the interview. I got to listen to the recording and got the transcript of all the bloggers’ questions, but it’s still a shame to have missed out asking something myself. Anyhow, here’s the interview:

Q: What can you tell me about any of the upcoming episodes?

Tim Roth: I think that the overall thing is that we’ll be looking at Foster and Lightman’s relationship. We look at how they met, which is a fun thing that we do. There’s my relationship with my ex-wife and also with my daughter. The daughter stuff will feature more and more heavily, I think, because she’s such a good character and the actress is so very good. But we’re writing to that. And the case is strange and a little bit more adrenalin floating around this season, I think.

Q: Now that you have so many episodes under your belt, have you gotten used to the machine that is producing this show?

Tim Roth: At the beginning I found it difficult and I think that a lot of that had to do with the scripts. They were trying to find the show. The writers were firstly trying to find the show as much as we all were. Gradually, I think we started to find our feet. The second season has been much easier in that respect. Once again, the two writers that rose to the surface in the second season have now gone on to run the writers for the third. So it’s gotten progressively smoother, which makes the job of acting in it much easier. So gradually, I think, yes, it’s become a much better experience. It’s a lot of fun now, actually.

Q: And the “will they, won’t they” romance between Cal and Gillian, is that something we’re going to see gel a little bit more this season?

Tim Roth: Yes, in the second season you do. There’s a boyfriend that rolls up for her and there’s the odd fling for me in the second season. But in the third, they’re actually sitting down to determine how the character is going to progress right now. So, I’ll find out before you guys do.

Q: You met Dr. Ekman to play your role. What was he like?

Tim Roth: He’s really the sweetest fellow. He’s a very cool guy. It’s very different from my character, but the science is his. One of the best things he said to me, I was quite nervous being around him because I felt that he was reading me all the time, which, in fact, he is. He can’t just stop doing it once you learn how to do it. But one of the best pieces of advice he gave me, I asked him if he was ever aware of his body language and did he get to be too self aware. He said actually not. He said, “I’m not on stage, they are. Everybody else is on stage.” I took that and ran with that notion with the character because he truly doesn’t care how he looks, as long as he gets a reaction that he’s looking for from the characters that are across from him. I found him to be a very charming man, a very cool guy.

Q: Since you’re on FOX and the show is based on this fascinating character, just like House is, do you have any input on the script like he does and maybe are you involved in the executive production of the show?

Tim Roth: I’m not officially, but yes I do. I talk to the writers all the time. They run ideas by me and so on. We have now a completely revamped writer’s room, which is now going to be run by an English writer, Alexander Cary and a guy from Brooklyn, Dave Graziano. Those two have taken over. They were my two favorite writers from last season. They have a very interesting group, new group around them. And I’ll be meeting with them, actually, for the first time on Tuesday and we will be running ideas by each other and I will be part of that. I’m very heavily involved in the making of the show, which I think is a good thing. I think you should be if you’re central to it. 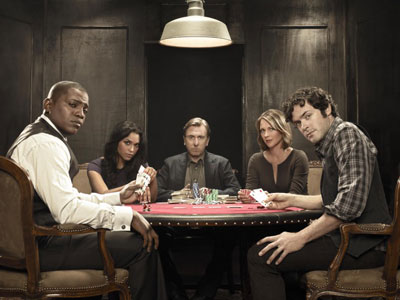 Q: What were some of the initial acting challenges you found for stepping into this role?

Tim Roth: I didn’t want to know this science. I didn’t want to have that ability. So one of the biggest challenges was trying not to learn this stuff because I don’t like taking my work home, but as you were around it, it does seep in a bit. The challenge really for me was always to try and get the material to be better. Once you have established the character, you can play around with it and you can change him and I did do that.

But once I was allowed the flexibility, the next question was trying to get this material to be better and better. By that I felt I meant really was I want to know the background of these guys. I want to know how they relate to each other. I want some kind of background history that I can sprinkle into the scripts and so on. So that was the challenge really. It’s a day to day challenge. It’s a tough job, but it’s a very, very enjoyable job or can be anyway.

Q: Are there any particularly enjoyable scenes that you can think of with some of your guest stars that are coming up?

Tim Roth: I usually like it when they laugh. We have a tendency to assume the guest actors when they come on. You’re usually required to hit your marks and say your lines exactly the way they were on the page. We have an atmosphere in which you can play around and improvise. I think it’s quite unusual in television. So when they come on and once they find out that they can do that, then it makes for a very, very fun time. So usually, I’m trying to make them laugh during a take and see if I can do that. Those are my good times.

Q: Is there anyone in the world you wished that you could read or tell if they were lying.

Tim Roth: The president. Actually, it was fun to be doing this show in the middle of the election because when those guys trot out, you can really use science to see that lie, to expose that lie. But some of them are better at it than others. Someone that could make the world unsafe, you want to know if he’s telling the truth or maybe you don’t. Maybe that would be too scary. 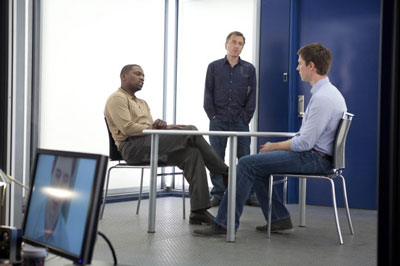 Q: Are there any other upcoming projects that you’d like to discuss, any movies or anything?

Tim Roth: I did a film called Pete Smalls is Dead, which is a very strange film. I did it with Steve Buscemi and Dinklage and Seymour Cassel and all these guys. It’s very, very low budget, but a lot of fun. That’s coming up. I always have a backup plan. I have a couple of things I want to direct.

Q: Was Cal Lightman intended to be British from the get go or did they change that once you were cast and how do you think being British influences the show?

Tim Roth: The reason he’s British is because when I was doing the deal with these guys at FOX, I said I’m not doing an accent because I figured that I will be working very, very long hours and seven days a week pretty much because you’re preparing the next script on the weekends any time you have off. So if I have to do an accent on top of that, that would have been a workload that would have been a 20 hour day. So I said no and there was a lot of back and forth about it, but not really from me because when I was talking to them about it, I can always just go back and do movies. So I had that going for me, I suppose and then they agreed and they were worried about it and more worried about it.

But after a while, they realized it’s quite refreshing. It’s different sound on American television than you normally get in a television show. They embraced it wholeheartedly. They’ve been very, very cool with it, actually. I’m glad it’s happened. I think it makes the character a little more interesting for me to play. We have one of the show runners that is from London as well, so he really understands that world.

Q: We’ve had some interesting episodes where Cal goes up against like poker players, battling the wires. I wonder if there’s anybody that you would really like to see him go against as a challenge, or if there’s anything that stands out as somebody he might square off against.

Tim Roth: I think his daughter would be interesting. We do a bit of that in the remaining episodes. My aim is – and I think we’re exploring that for the third season – is somebody that is way better than him at what he does and how do you deal with it. How do you deal with that? If you keep not being able to read them and your face and your face gets rubbed in at time and time again, how would he deal with that, I think that might be fun.