I recently got to see M. Night Shyamalan’s The Last Airbender and although I can’t talk about that (it’s embargoed until August), I can talk about the original TV series it was based on. I looooved that show, and I still think it’s one of the best TV shows from the past couple of years, even compared to ‘grownup’ shows.

If you haven’t seen it yet, now’s the time to do so (and if you do, stick with it for a couple of episodes. The first couple are a little on the silly side, but the story is good). Nothing has been officially been confirmed yet, but there are rumours of a new TV show called Avatar: The Legend of Korra. 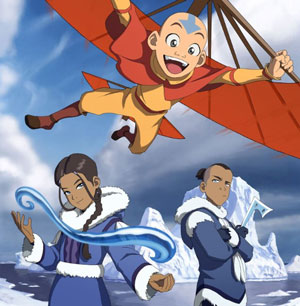 I did some investigating to see if there was any truth at all in this, and I think there is. For starters, Viacom trademarked Nickelodeon Avatar: The Legend of Korra two months ago, which seems to indicate this isn’t completely pulled out of thin air. Besides that at a signing for the artwork book about the TV show, the site Racebending.com managed to ask some questions to the creators of the original. Their reply: they couldn’t say anything at the signing, but to expect an announcement, soon.

I’m guessing and hoping that we’ll hear something official about it at Comic-Con. So far it looks like it will be set 100 years after the events of the Last Airbender and will star the titular charactar Korra, a female waterbending Avatar. She’d be joined by two other new characters Meelo and Wei Bei.

Cool news, if this all turns out to be true. So what do you think? I’m guessing that by now Aang and everyone else is dead. And maybe one of Aangs kids will become Korra’s airbending teacher? (although that would be the final element she’d have to master) Also I’m wondering whether we’ll finally see some of the unanswered questions of the original show in flashbacks here.