Yet another remake based on a beloved childhood movie. Will Hollywood ever get enough of remaking stuff? Anyhow, when I first heard there’d be a Karate Kid remake, I thought there was no way in hell it could ever be as good as the original. Turns out I was wrong. 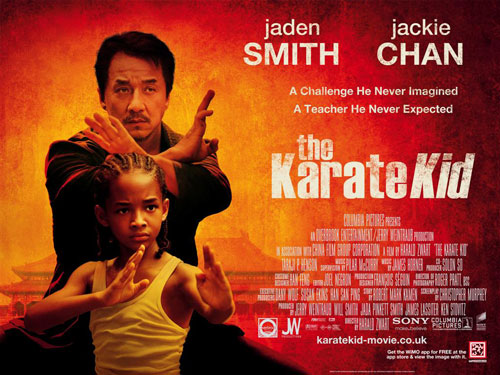 The Karate Kid stars Jaden Smith (son of Will Smith and Jada Pinkett Smith) as Dre Parker, a 12 year old boy who moves to Beijing with his mother (Taraji P. Henson). Dre falls for his classmate Mei Ying, but in the process makes an enemy out of Cheng, a kung fu prodigy. After getting beat up by them, Dre turns to the maintenance man Mr Han, who agrees to teach him kung fu.

The thing with remakes always is “why remake it?”. In the case of Karate Kid, I have to admit the original is pretty outdated, and if you ask anybody under the age of 16, chances are most haven’t seen it or at least aren’t as attached to it as my generation. The remake does a great job of modernizing the story, and recreating what we loved in the original for new audiences.

The story is pretty much the same: kid gets bullied, kid meets crazy old guy, kid learns martial arts, etc. But there are a couple of changes which work out right. For starters, the main character is younger; I saw the original when I was 11/12ish and would have loved it if the main character was the same age as me. Next to that the movie takes place in China; besides the gorgeous scenery, it gives the story a nice added backdrop. 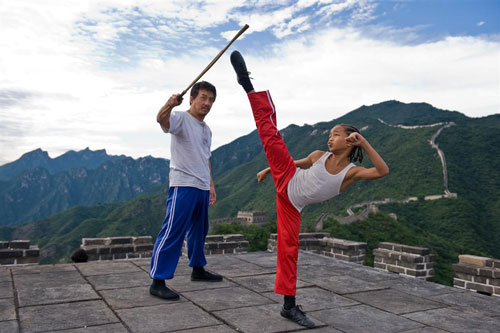 Jaden Smith is great as Dre, and I do see quite a bit of his father in him. His character starts out as a tad annoying, but you slowly start liking him. I was scared that Jackie Chan’s portrayal as the martial arts teacher would be silly, but he plays the character straight without any goofyness.

I still find it weird that they just didn’t rename the movie to The Kung Fu Kid (I’m guessing the studio liked the name recognition of the original), cause there’s no karate in this movie at all. This does mean that the lessons (Wax on, wax off, etc) are given a new kung fu spin and it’s fun to watch Dre learn kung fu.

The Karate Kid is a fun movie and if you have kids a must see for this summer. It’s the good type of remake, taking what worked in the original and recreating it for modern audiences.