So I’ll start off with the AWESOME news: I’m going to San Francisco!!!!! Our team won the overall best prize at CharityHack last weekend and we’ll get to attend the PayPal X Developer Conference in San Fran. Flights, hotel, everything will be taken care of. It still hasn’t completely sunken in, but we worked so hard last weekend to make an awesome hack, and it’s amazing to win.

CharityHack is a two day hack event, where developers, designers and anybody else who wants to come along, create hacks to help charity. Like last year it was held organized and sponsored by PayPal and held at their offices in Richmond. Now, I’ve been to 3 hack-weekends in the past 3 weeks (one of the reasons why I haven’t blogged that much): MusicHackDay, Over The Air and as last CharityHack. This time around I tried to actually create something each time, finally teaching myself some web development through these projects.

For CharityHack, I teamed up with Cristiano, Dom and Caius to work on an app we called CharityBox. After Over The Air, we all really felt we should create something interesting for CharityHack and Dom had this cool idea… So we all showed up on Saturday and started working. 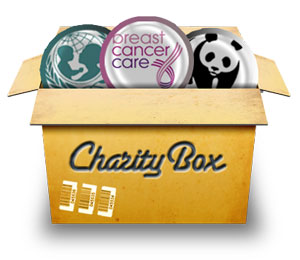 So what did we make? Well, kind of a lot actually. I’m still amazed at the amount of work we managed to pull off in only 24 hours. For starters, it’s a browser extension that turns links to online shops into affiliate links for charity. Each time a person clicks on one of our affiliate links and then buys something online, a percentage of the amount goes to charity… with no added cost to the user. Besides that though we wanted to add something that benefited the user (give them incentive to actually install the app). So the extension icon blinks if you’re on a site for which we have a voucher for, giving you discount, freebies, etc.

Then we also created a way the user could choose to which charities the ‘raised’ money went; we did this by replacing the ads on your Google Search page with info on relevant charities and allowing you to select charities you like and want to donate money to. Finally we also added a site where people could login with Twitter and see how much money they’d raise and which stickers they’d earned (like achievements, awards, badges, etc). Here’s a video of the final presentation that Dom gave:

Again I’m amazed with the amount of work we managed to do! The app isn’t completely finished; not everything above is 100% stable to release into the wild, but most of it we have got working. You can sign up at CharityBoxApp.com to get notified when we actually launch.

After seeing the presentations of the other hacks, I didn’t think we were going to win; there were so many good hacks done this year! I’ll go through my favourite other hacks in another post (cause this post is already quite long as it is), but if you want a sneak peak just do a Twitter search for #charityhack.