Event: Festival of The Spoken Nerd (plus a giveaway!)

One thing I love about being a blogger is that I’ll occasionally be emailed something I wouldn’t have discovered otherwise. Like today.

Next week Thursday (2nd of February) there will be a one-night performance of Festival of the Spoken Nerd. Why have I not heard of these guys before? Their show sounds like something right up my alley!

After a year of sold-out shows in London and at science festivals across the UK, Matt, Helen and Steve are taking over the Theatre Royal Haymarket. Join three of the London’s best (and nerdiest) performers for a night of comedy, science, maths, geeky songs, special guests, interactive experiments, maybe some things that go bang…

What: Festival of the Spoken Nerd
When: February 2nd 19:30
Where: Theatre Royal Haymarket
Tickets: £12 (buy here) 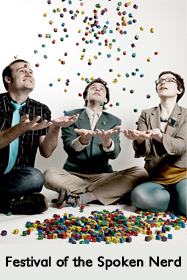 I’ll definitely be going next week, but I’ve also got two tickets to giveaway to one lucky reader! All you’ve got to do is leave a comment behind with who your favourite scientist is and why.

You’ll also get a second entry if you’re following me on Twitter and tweet about this giveaway with the hashtag #missgeeky. The competition ends on January 30th after which I’ll randomly draw a winner. Of course, you’ll have to be based in London (or willing to travel to London) and be available on February 2nd.