Two weeks ago I got invited to a “hands-off” demo of the first person shooter Metro: Last Light, the sequel to the 2010 game Metro 2033. Having not played its predecessor, I was initially hesitant to come by and take a look at the new game. Would I “get” it? Would I miss something by not having played the previous one? Can I review/preview a game of which I don’t know the full back story? But then I realized: that shouldn’t matter at all. I’m certainly not the only one out there who hasn’t played the first game! 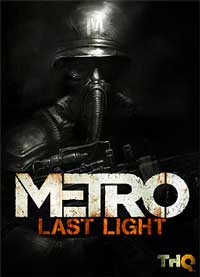 The original game was based on the novel Metro 2033 by Russian author Dmitry Glukhovsky. Both the game and the book got sequels (Metro: Last Light and Metro 2034) and even though the original author has worked on both, the sequels don’t have anything to do with each other. The story is set in a post-apocalyptic Moscow, where humans have survived by living underground in Moscow’s vast metro system. Our protagonist is Artyom, a 20 year old survivor, that has to deal with the various issues the new world has to offer, including mutants, nazis and other rival bands of survivors.

I was planning on writing up and exactly describing what I saw in that demo, but it turns out that the entire demo is now on YouTube. So instead of describing it all, I’ll just post the video here and let you guys see it for yourselves (yay, for lazy blogging!):

I like the look and feel of the game; I always enjoy post-apocalyptic stories and seeing the different ways they can come to life. The underground metro system looks suitably creepy and dark, while the above ground left-over bits of Moscow look exactly like you imagine a post-nuclear city would look like. I initially thought the story looked quite straight forward, but I’m intrigued by the whole hallucination thing in the plane: clearly both Artyom and Pavel have the same experience… I’m very curious to see what happens next.

Gameplay wise I think this looks like the type of game I could loose myself a couple of hours in. I like how immersive the game feels; there is no HUD and no blinky-look-an-item-is-here-highligter, with you only having to rely on your own eyes, your watch, your visible ammo and signs of how you feel (like heavy breathing and blood spatters indicating that you’re hurt). Even though I like how immersive this looks, I do wonder how much more difficult this will make the game. A HUD and item highlighter will be available in the end game, but you’ll always have the option to turn those all off.

Metro: Last Light looks like it could be a great game, and I’m really looking forward to getting my hands on it and trying it out for myself. I also now am quite curious to see how the first game was; the story seems intriguing and if it’s similar to this one, I wouldn’t mind playing it.