I love the look of this new comic book series from Stan Lee, Stuart Moore and Andie Tong! Check out the trailer:

Can’t wait to see what superpowers map to each Zodiac sign… my sign is Rat and I’m curious to see what powers that character will get.

The first book in the series just got released last week and thanks to Disney Enterprises, Inc. I’ve got a Zodiac Legacy prize pack to give away to one lucky reader! The winner will get a copy of The Zodiac Legacy: Convergence and a custom Zodiac Legacy clock: 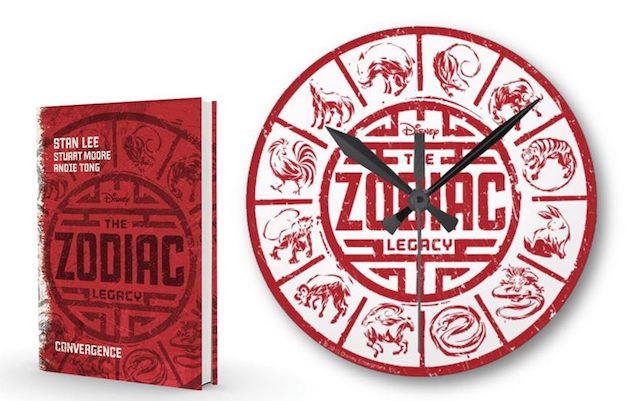 So what to do to enter the giveaway? Leave a comment behind on this post with what superpower you’d love to have and why! You’ll also get a second entry if you’re following me on Twitter and tweet about this giveaway with the hashtags #missgeeky and #ZodiacLegacy. The competition is open to everyone and it will end on Friday February 6th.

About the Creative Team:

Stan Lee is known to millions as the man whose Super Heroes propelled Marvel to its preeminent position in the comic book industry. His co-creations include Spider-Man, The Avengers, Iron Man, The Incredible Hulk, The Fantastic Four, as well as hundreds of others. He introduced Spider-Man as a syndicated newspaper strip that became the most successful of all syndicated adventure strips and has appeared in more than 500 newspapers worldwide. Stan currently remains Chairman Emeritus of Marvel, as well as a member of the Editorial Board of Marvel Comics. He is also the Chairman & Chief Creative officer of POW! Entertainment, a multimedia entertainment company based in Beverly Hills, CA.

Stuart Moore has been a writer, a book editor, and an award-winning comics editor. His recent writing includes Civil War, the first in a new line of prose novels from Marvel Comics, The Art of Iron Man 3 (Marvel, with Marie Javins); and THE 99, a multicultural super hero comic from Teshkeel.

Andie Tong has worked on titles for various franchises, including Tron: Betrayal, Spectacular Spider-Man UK, The Batman Strikes, Smallville, Wheel of Time, TMNT, Masters of the Universe, and Starship Troopers, working for companies such as Disney, Marvel, DC Comics, Panini, Dark Horse, and Dynamite Entertainment, as well as commercial illustrations for numerous advertising agencies including Nike, Universal, CBS, Mattel, and Habsro. When he gets the chance, Andie concept designs for various companies, and also juggles illustration duties on a range of children’s picture storybooks for Harper Collins. Malaysian born, Andie migrated to Australia at a young age, and then moved to London in 2005. In 2012, he journeyed back to Asia and currently resides in Singapore with this wife and daughter.