I read The Circle last year, so have been curious to see how the movie adaption would turn out. The book creeped me out enough, that I ended up tweeting and sharing less online, and I’m still considering the implications of how we interpret and act on transparency and openness.

I’m a little underwhelmed by the trailer though. I don’t think it really captures the interesting parts of the story:

I used to love the Power Rangers when I was a kid, but I have to admit I had my doubts about a new movie version. Now that the trailer’s out: I’m actually quite liking the look of this… I’m curious to see how/if they add the giant dinosaur robots!

Who you gonna call?

Ooh, this is looking like fun! There’s also a really cool hidden link to Paranormal Studies Lab within the trailer (apparently hidden within the physics equation): so geeky!

This won’t air until next year, but I love the look of this teaser trailer!

I’m not familiar with the musical this movie is based on, but this looks like fun!

Starring Meryl Streep, Emily Blunt, James Corden, Anna Kendrick and Chris Pine, “Into the Woods” is a humorous and heartfelt musical that follows the classic tales of Cinderella, Little Red Riding Hood, Jack and the Beanstalk, and Rapunzel—all tied together by an original story involving a baker and his wife, their wish to begin a family and their interaction with the witch who has put a curse on them. 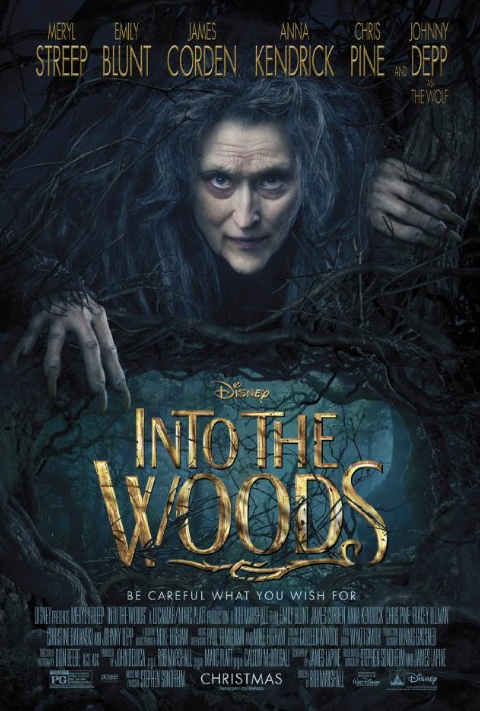 Sigh. I’m going to have “I’ve got no strings” stuck in my head for the entire day now, aren’t I?

I can’t quite believe it’s halfway December already! The past few weeks have been so busy with various exciting things happening (which I should hare with you all soon!). Because of that I’ve missed a ton of cool trailers that got released; so many epic looking movies are coming next year. Here’s a roundup of all the awesomeness heading our way:

Woah. I’m not completely sure what’s going on in this trailer, but I so want to see this. Knowing the Wachowski’s it’s going to be unique in some way.

This looks awesome! Based on Oblivion, I’m wary of how original this will be, but it does look like a lot of fun. Emily Blunt looks badass and the whole sci-fi Groundhog Day feel to it could make it quite epic. Sidenote: hi Greenwhich, nice to see you again!

Darren Aronofsky is one of my favourite directors, so I’m curious to see his take on the Noah story.

Watch this trailer till at least the 1:20 mark… Not what you were expecting, right?

It’s time for another Trailerrific Thursday post! So many good trailers have come out the past week, it looks like we’ve got an awesome summer of movies ahead of us. Which movie are you the most excited about? Let me know in the comments or on Twitter.

We’ve had to wait 7 years since Alfonso Cuarón brought us Children of Men, but his latest movie looks fantastic. Gravity is about two astronauts (Sandra Bullock and George Clooney) who get stranded in space after an accident during a space walk mission. I’ve heard the movie opens with a single 17 minute long take… I think this could be epic.

Ooh, a romantic comedy with time travel! About Time is written and directed by Richard Curtis (Love Actually, Four Weddings and A Funeral) and stars Domhnall Gleeson as a young man who discovers he can travel back into time and redo parts of his own life. I love how quirky, funny and sweet the trailer looks; I can’t wait to see this!

This looks like fun. I loved Pitch Black, the first movie in the Riddick series, and this 3rd movie looks like it will be in the same vein. The effects and production quality don’t look brilliant, but I think the story and action sequences will more than make up for it. Also: Katee Sackhoff! I don’t think she’ll ever get rid of her Starbuck image; we don’t see much of her character, but it looks like she’ll again be an awesome ass-kicking heroine.

It’s the final chapter of the Three Flavours Cornetto trilogy! Shaun of the Dead and Hot Fuzz were hilarious, so I’m sure this final movie will be just as awesome. Five friends attempt to redo an epic pub crawl in their old home town, only to discover an alien invasion.

I again have to make a difficult decision: read the book first or watch the movie first? This time around I’m tempted to read the book first: what would you do? I do like the look of this though; I’m not exactly sure what is going on, but it looks like it could be a fun and action filled scifi.

The theme of 2013? White House Under Attack movies. We’ve already had Olympus Has Fallen and now White House Down (and I think there are two others as well). I enjoyed Olympus Has Fallen; it was a lots-of-explosions-and-fights action movie, but still quite fun. The trailer for White House Down makes it look even cheesier, which I should have expected seeing as Roland Emmerich is involved (Independence Day, Godzilla, The Day After Tomorrow and 2012).

This doesn’t really look like my type of movie, but it does look interesting. Captain Phillips is directed by Paul Greengrass (The Bourne Supremacy, The Bourne Ultimatum) and stars Tom Hanks as Captain Richard Phillips who was taken hostage by Somali Pirates during the Maersk Alabama hijacking in 2009.

I know this came out like 3 weeks, but somehow I only got around to watching it now. I’m not exactly sure why, but I’m not really feeling excited for this movie at all. I liked the first one, and I really like Chris Hemsworth and Natalie Portman, but I have the feeling something is missing…

Ooh, I had heard about Rush a while ago, but this is the first footage I’ve seen from it. It’s directed by Ron Howard and it’s about the rivalry between Formula One drivers Niki Lauda and James Hunt.

I loved Kick-Ass. It still is one of the highlights of my blogging career (getting to attend the first proper screening of it on my birthday), and I just love the movie. So of course I’ve been looking forward to its sequel…

Well, we now finally got a trailer. And it looks great: