I haven’t done this type of post for a while now and a lot of trailers have come out since then. I’m hoping I’ve got most of them covered, but one or two might have slipped through my fingers. There are 14 trailers in total. If you don’t want to go through them all, check out at least The Fall, Step Brothers and The Incredible Hulk.

Madagascar: The Crate Escape
Wow, what a clever title! Cause it’s like in the first movie they were in crates, but then they escape, but it also means like great escape; it’s just so smart! The trailer to this sequel of Madagascar is just as awkward as the previous sentence. Instead of having a normal trailer, they had to bring in a live-action Ben Stiller to tell us what the film is about. Why?? The movie looks just like more of the first one. As long as the penguins get more screen time though, I’ll gladly watch this movie. [Trailer]

Pathology
What was the person that made these two trailers thinking? The first one came out back in September and, while it captures the idea and feel of the movie, it gave way too much away. There are parts in the trailer that I think spoil the movie. Why would a studio do this? Don’t they want people to go to their movies? I should write a post purely on this; studios do this way too often. The movie stars Heroes’ Milo Ventimiglia as part of a group of pathology students playing a secret after-hours game of committing the perfect murder. Although I think it will turn out to be predictable, it sounds interesting enough. The second trailer seems a bit meh; you get no idea at all what the movie will be about and just seems a bit pointless. My tip: skip the first trailer, watch the second one and hope there will be a third trailer coming soon. [Trailer 1] [Trailer 2] 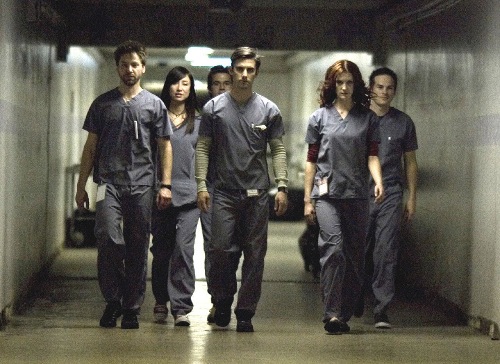 Iron Man
Again another Iron Man trailer. I’ve been psyched for this movie for ages and it’s definitely going to be a showdown between Iron Man and The Dark Knight as THE comic book movie of the year (although my bet’s still on The Dark Knight). [Trailer]

The Love Guru
It’s been six years since Mike Myers‘ last original character Austin Powers and I was quite curious to see what he would come up with next. While I wasn’t that much of a fan of Austin Powers, it did have it’s funny moments. Judging from this trailer though makes me think The Love Guru will come nowhere near the antics of Austin Powers. It looks absolutely afwul! Add Jessica Alba as love interest and Justin Timberlake as a French gyrating something and you’ve got yourself a movie I’ll avoid like hell. [Trailer] 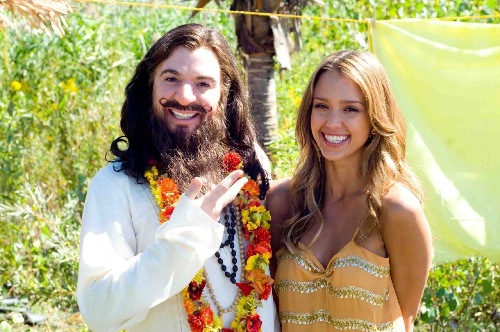 Meet Bill
Oh no, take cover! Another Jessica Alba movie! Run for your lives! Talentless bimbo aside, Meet Bill could turn out to be a sweet little movie. Aaron Eckhart plays Bill, a guy who’s fed up with his job and cheating wife, but takes on the role of mentor for a kid (known throughout the movie only as The Kid). Besides Alba and Eckhart, the film stars Elizabeth Banks (Scrubs, Definitely, Maybe), Timothy Olyphant (Die Hard 4.0, Hitman), Logan Lerman (as The Kid, 3:10 To Yuma) and SNL regulars Kristen Wiig and Jason Sudeikis. [Trailer]

10,000 B.C.
This movie is coming out today here in UK, but here’s one more final trailer to convince you why not to see this movie. Egyptian pyramids built with the help of mammoths; a tribe full of white people with dreads, eskimos and Native Americans; Scandinavian/Egyptian/Viking demon warriors; this movie is full of stuff that historically don’t make sense. /Film sums it up pretty good: “if you can understand titling this movie “The Jurassic Apocalypto Pathfinder the Day after Tomorrow”, you’d understand it completely and not need to see it.” [Trailer] 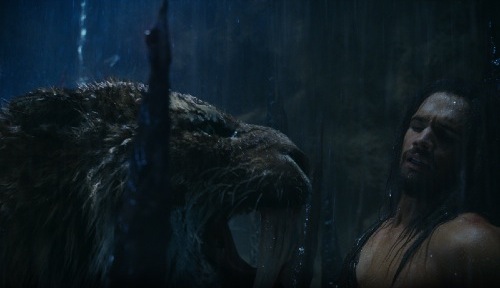 The Visitor
This is a small indie film that made it’s debut at Sundance in January. If you like emotional life stories with a touch of tear-jerkiness, this film is for you. It’s about a widower who after a long stay away finds two squatters in his apartment. Instead of kicking them out, he let’s them stay and becomes friends with the two. It’s not my type of movie, but I know a couple of you out there who would like this film. [Trailer]

Sex and the City: The Movie
I kind of feel obliged to also list this trailer, but I am definitely not one of those woman who are jumping up and down hysterically for this movie. I was never a fan of the TV show; I tried to watch a couple of episodes, but failed to see what all the fuss was about. Anyhow, for of all you girls out there that loved the series, here’s the trailer. [Trailer]

Wanted
Yes, again another Wanted trailer. They don’t really show any new clips; you’ve got the same “shoot the target, bend the bullet” scene, the “Angelina Jolie hangs out of a car” scene and the “Angelina Jolie on a train bending backward to fit under a tunnel” scene. But somehow the trailer feels more coherent, with a bit more backstory than the previous ones. [Trailer]

The Fall
Once in a while you come across a trailer of a movie you’ve never heard of and it blows you away. There’s such a magical and enchanting vibe coming from this trailer, kind of a cross between Hero, The Princess Bride and Equilibrium. It stars Lee Pace (Pushing Daisies) as a bedridden man in a hospital who tells a girl a fantasy story, picturing hospital staff, other patients and themselves as the main characters. You can find the trailer on the movie’s website, along with some beautiful screenshots. [Website] 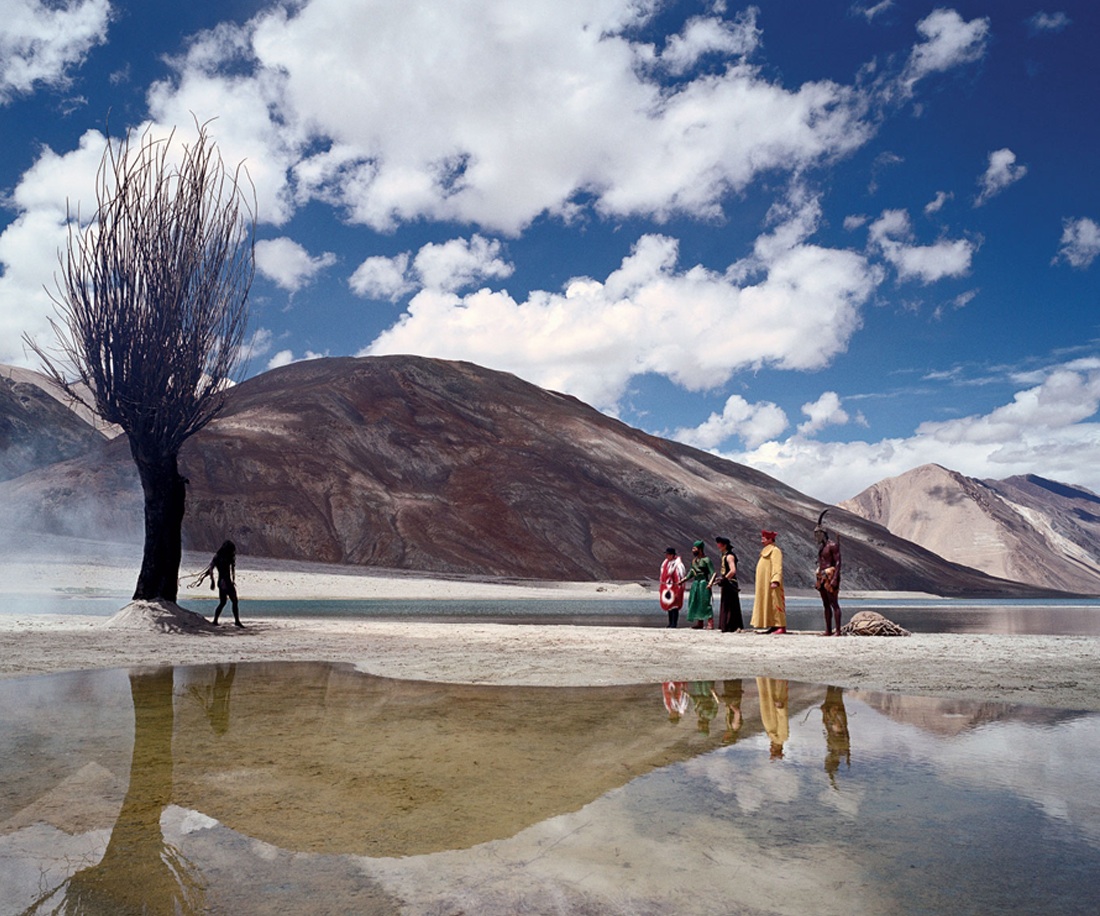 Funny Games
The first (normal) trailer for Funny Games appeared a while ago [Trailer 1], but I like this second one more. It’s got this quirkiness to it, which seems so contrary to the actual atmosphere of the movie. Funny Games is about two psychopaths that take a family hostage, forcing them to play all kinds of nasty games. I’ve heard a lot about this movie, with half of the people hating it and the other half loving it. I’m curious to see how it all will turn out. [Trailer 2]

Step Brothers
This is one of those movie that just seems so silly, so stupid, you just can’t imagine it could ever be funny. I have no idea how the actual movie is going to be, but the trailer of Step Brothers got me laughing. Will Ferrell and John C. Reilly play
two spoiled jobless living-at-their-parents guy, who become step brothers after their single parents get married. [Trailer] 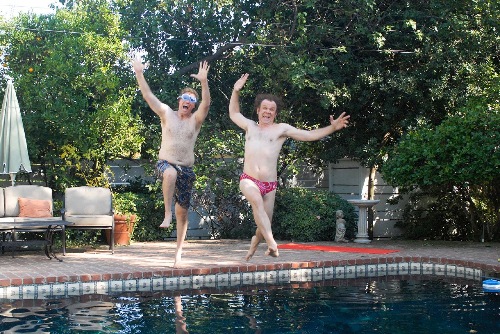 A Necessary Death
This film debuted at SXSW last weekend and I heard that not everybody understood it was a work of fiction. Three film students place an add to find someone who wants to commit suicide, so they can follow the person in his/her final days and make a documentary about it. The whole process of placing the add, holding auditions and so on, is filmed by a fellow student (the real director of the movie). So it’s a fake documentary about the creation of a controversial documentary. [Trailer]

The Incredible Hulk
Remember that bad movie a couple of years ago about this guy that turns into a big green monster? Yeah, just forget that entire movie. The Incredible Hulk isn’t a sequel, but a complete retelling of the comic hero’s story. With Edward Norton and Liv Tyler on board the acting should be fine, but after watching the trailer I’m not sure about the rest of film. I still find the visual effects of the Hulk not up to scratch; it stills seems completely out of place. [Trailer]