First off, there has been a lot of Iron Man news these past weeks: new clips, new photos, even six actual scenes from the movie have been released. If you’re curious, go ahead, take a look. Me? I’m already convinced I’m going to see this movie, so why bother with all this stuff? In the end they’ll only potentially ruin the movie for you.

Anyhow, it’s been a month ago since I did my last Trailerrific post and a lot of trailers have come out since then. I’ve been meaning to do this much more regularly (like every week), but I never get around to doing that (yeah perhaps I’m just lazy). I’m going to split this all into three posts with the second and third parts appearing sometime at the end of this week. I promise though: from now on this will be a weekly post. Any volunteers into kicking me when I don’t?

Pathology
Remember the previous two trailers? This trailer is a Red Band version of that first one, meaning more blood and more sex (a lot more sex). Strange enough though by adding the Red Band stuff to it, they’ve cut away more of the parts that would spoil the movie. It still gives a tad too much away and in my opinion they could easily make an interesting trailer without revealing so much. Then again I guess the movie’s pretty predictable anyway and nobody’s going to see it because of the brilliant intricate plot. [Trailer]

The Life Before Her Eyes
The teaser trailer came out in January and I already said then that this will be a 2009 Oscar contender. And after seeing the full length trailer I stand by that. Evan Rachel Wood plays Diana, a teenage girl who experiences a high school shooting. Years later the grown-up Diana, now played by Uma Thurman, is still traumatized by the event. [Trailer]

Mamma Mia!
I’m not an Abba fan, never was, never will be. But I have a feeling I will see this movie (not in the cinema), just because of Colin Firth and Pierce Brosnan. The film is based on the Broadway musical about a bride-to-be trying to figure out who her father is. If you like cheerful musicals, this is the film for you. [Trailer] 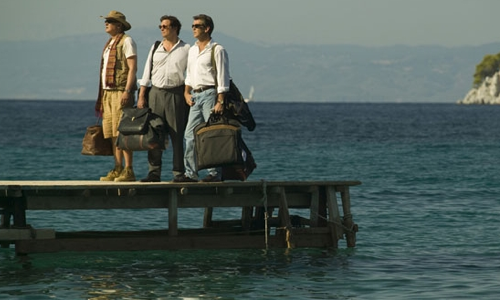 Rosencrantz and Guildenstern Are Undead
What do you get when you mix vampires, Hamlet and the Holy Grail? Apparently, this movie. I’m not kidding. This movie seems to mix the those three subjects in a weird and unique way. Definitely going on my Must-See list. [Trailer]

The Strangers
I want to say this film seems interesting, but looking at the horror movies Hollywood has lately produced, it all seems to be repeats and rehashes of older films. The Strangers looks like it might have a slight original angle, but tell me how many masked faces did you count in the trailer? I’m just getting a feeling of “been there, done that, next movie please”. Although it does have Liv Tyler (without pointy ears), so that should get the geeks going. [Trailer]

Tropic Thunder
This film could be the dark horse of 2008. In short: it’s Galaxy Quest in the jungle. Three big actors working together on a big-budget war movie are dumped in the middle of the jungle, thinking everything that happens to them is part of the movie. You’ve got the action star (Ben Stiller), the comedy star (Jack Black), the method actor (Robert Downey Jr.), the crazy director (Steve Coogan) and the war hero (Nick Nolte). If you haven’t seen the trailer yet, you should. This will definitely be a must-see this summer. [Trailer] 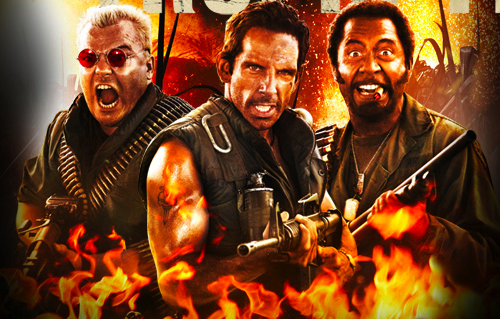 Stone’s War
The premise of this movie is Nazi Zombies fighting in World War II. That alone would make see this movie, which made be think there would at least be an interesting trailer, right? Now I know it’s not an official trailer yet (it hasn’t even got a release date yet), but couldn’t they come up with anything better? Something without the standard ‘Requiem for a Dream’ tune? Something that actually shows ‘Nazi Zombies’? I’m not asking too much, am I? [Trailer]

Deception
Any film with both Hugh Jackman and Ewan McGregor in it, gets my stamp of approval. Deception is about an accountant (McGregor) who gets introduced to a secret sex club called The List by new lawyer friend Jackman, but of course not all is as it seems. Again a potentially great movie and a trailer that reveals too much. Given the (what I believe will be) intricate plot, maybe it doesn’t actually spoil anything, but do we really all those “surprises” and “reveals” in the trailer? My tip: watch half of the trailer. If you’re convinced, stop watching. If you remain unconvinced, watch it all. [Trailer]

Special
I’m not sure about the release dates of this movie. It was made in 2006 and has been released in some countries, but from what I’ve heard there might be a wide release of it this summer (please contact me, if you have some more info). The film is being described as a superhero spoof, but don’t think this means it falls in with the silly parody movies like Scary Movie, Epic Movie, etc. Michael Rapaport plays Les, a metermaid that has a psychotic reaction to his medication and starts believing he’s a superhero. [Trailer]