Thanks to Sizemore, I got an invite for a bloggers screening of Forgetting Sarah Marshall last night. I had seen the trailers and read early reviews on it, so I went in with the feeling I would like this movie. I didn’t expect though that I’d be laughing so much! It’s by far one of the funniest films I’ve seen in a long time. 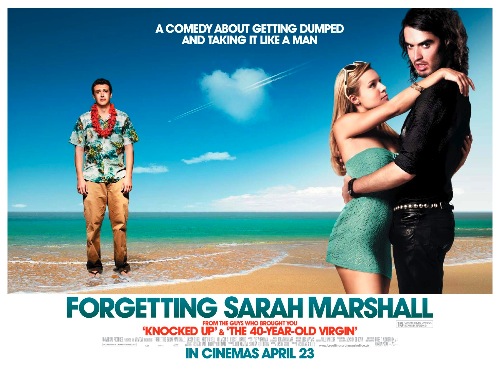 Peter Bretter (Jason Segal) is devastated when he gets dumped by girlfriend Sarah Marshall (Kirsten Bell), star of a hit TV show. In an attempt to get over her he takes a vacation to Hawaii, only to discover Sarah is there too… with her new boyfriend, rock star Aldous Snow (Russell Brand). While trying to avoid and forget about Sarah, Peter enjoys the companionship of the laid-back resort employee Rachel (Mila Kunis) and a myriad of other characters.

Let me get one thing clear first: the movie seems as if it’s a romantic comedy, a chick flick, a boy-meets-girl story. It isn’t. While Forgetting Sarah Marshall does have a couple of these elements, it is first of all a solid good comedy. Initially I was surprised to see that more than half the attendees of the screening were woman (which for the geek crowd is still quite rare), but I’m guessing most guys are thinking this isn’t a film for them. Trust me when I say it is. There’s a sliver of an emotional message in it, but don’t let that put you off and miss the hilarity that takes up most of the film. 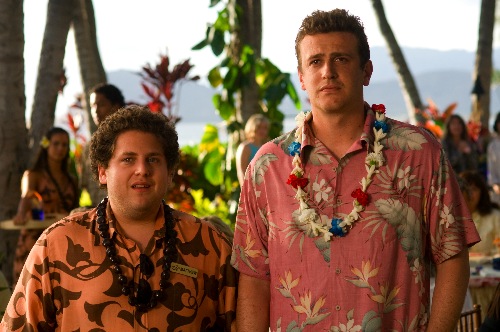 That being said, the movie is funny. Very funny. As I said before, I don’t think I’ve laughed this much during a film in ages. At times the audience was so in stitches that I couldn’t hear some of the next lines. A lot of the jokes are sexually laden, but in a good way. The jokes are more mature than the standard bodily fluids, high schoolish, There’s Something About Mary type of jokes you normally get in comedies from recent years.

Almost all the main actors are fairly unknown in the realm of movies, but they all prove they have the caliber to belong on the big screen. I like Jason Segal in How I Met Your Mother, but I didn’t think he could carry the weight of a movie as a leading actor. This role though is tailor-made for him. Literally. Besides starring in the movie, Segal also wrote the screenplay, weaving his own experiences throughout the story. No big surprise then that he fits so right in the role. One of Segal’s next projects will be to revive the Muppet movies and after seeing this film, I’ve got confidence he’s the perfect person to take that on. 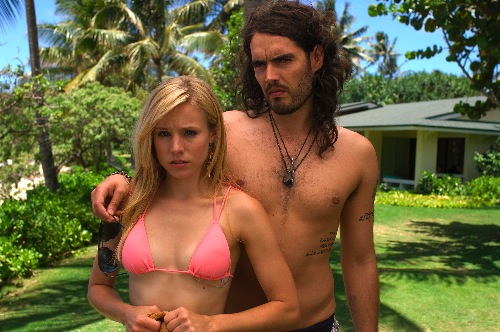 Kirsten Bell (Veronica Mars, Heroes) and Russell Brand are great as the ex-girlfriend and her new boyfriend. Both characters avoid falling in the predictable stereotype roles and are more nuanced than you would expect. Sarah Marshall isn’t a complete spoiled, pampered Hollywood starlet and Bell manages to make her likable and hatable at the same time. Russell Brand really surprised me. For those of you who don’t know him, he’s an English comedian and I know quite some people who thoroughly dislike him. Here he plays a similar character to how we usually see him and yet, it works. I couldn’t imagine any other person playing Ardous Snow and he delivers some of the best lines of the movie.

Mila Kunis (That 70’s Show) is adorable as the easygoing Rachel and her chemistry with Segal works really well. The supporting characters are also brilliant with a wide range of familiar faces: Bill Hader (Superbad, SNL), Jonah Hill (Superbad, Knocked Up), Paul Rudd (Knocked Up, The 40 Year Old Virgin) and Jack McBrayer (30 Rock). Looking at the names you can clearly see it’s a Jude Apatow produced movie and in this case that’s not a bad thing. 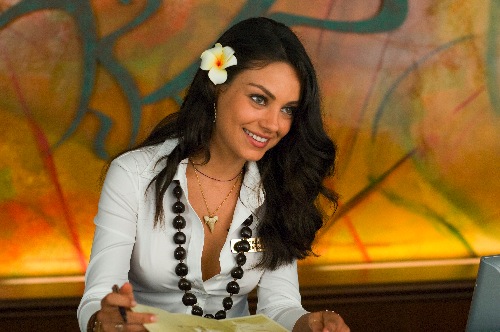 I could tell you a lot more about Forgetting Sarah Marshall, but I don’t want to give too much away and spoil the movie for everyone. There are certain scenes that are just unforgettable and outrageous, describing them would never do them justice. This is a movie you have to see and I recommend it to anyone who wants a couple of hours of pure fun. Again: don’t leave your seats when the credits start rolling. There’s a little scene during the credits you’ll also want to see.