I’ve been following the marketing campaign for The Dark Knight ever since their first “stunt” appeared a couple of months ago. Sadly most ARG related real-world activities had been previously only arranged for the US, forgetting (as usual) there are over seas fans just as willing to participate in these crazy events. Last Saturday I discovered the Joker’s website had been updated with countdowns to special events in 12 differet cities, including London. Yeah! Finally an event I can participate in!

The timer for the London event was counting down to Monday 28th of April 9:00pm and had this message along with it:

Gather with 300 of your closest friends at this exact spot on April 28th.

You’ll need to be in contact with a partner-in-crime who has online access to relay your instructions once you’re there. These instructions will give you the TRAIL to follow, but be sure to look both ways when crossing the street; we wouldn’t want you to make an unscheduled visit to the ER now, would we?

Put on a smile and plan to spend about an hour or so bonding with your fellow clowns.

Notice the TRAIL and ER? Chances were we were going to get to see a new trailer! The coordinates on the page led to this spot, a 5 minute walk from Piccadilly Circus. So at 7pm I arrived nice and early at the meet-up point, where I met up with some of the guys from the SuperheroHype forum. I had also arranged for another member on the SHH forum to be my online oracle, who would phone me all the clues through. For two hours we waited patiently and (of course) it started raining. A couple people were hard core enough to paint their faces Joker style and convinced several others to do the same. I guess there were about 150 people gathered together, when we got the first clues in:

Step 1: By the “ubique-itous” statue with the alien friend, face forward and count every ground floor column to your right. Beware the policemans’s black and blue stare.

Step 2: Up the stairs prepare for battle. You’ll be greeted with open arms. On the island, discover those who died in war and divide by the woman who surround them.

Step 3: Go to the place of the frilly collar and count the number of steps you see in stone and light. 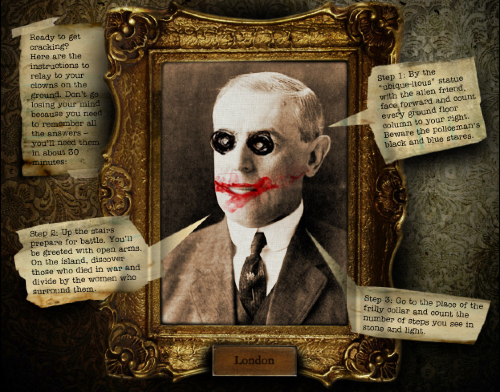 The first one took some time to figure out what we were supposed to do. The “ubique-itous” statue with the alien friend was clearly the memorial where we had gathered (it had ubique engraved on of it’s pillars). If you stood in front of it and looked forward, you were facing steps leading to Nelson’s Column with The Mall stretching out on both sides before it. On the right side, you can find the Carlton House Terrace with (well, wouldn’t you know) a long line of columns. Some people counted them and we got two different tallies: 34 or 35.

The second clue took us north, past Nelson’s Column to the Crimea memorial that featured a statue of a woman with open arms. After standing there for almost 15 minutes, nobody could figure it out so we continued to the third clue. This one was easy: the frilly collar had to be the fountain at Piccadilly Circus. Once there we counted the stone steps leading up to it (9) and discovered the neon lighted musical “The 39 Steps”, leading to number 48. 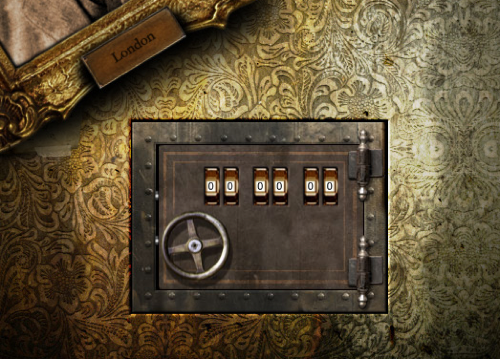 By now we found out we needed three two-digit numbers to open up a (online) safe, which would lead to more clues. Together with a couple others, I decided to walk back to the Crimea memorial to try and figure the second clue out. Still no luck and I made my way back to Piccadilly Circus. I then got phoned by my online oracle, who told me the safe combination was 35-90-48 and that there was a fourth clue:

Around the bend from the Miserable People is an exotic gate. Your contact will be waiting there. He will give you your final set of instructions.

By the time I made it back to Piccadilly Circus, the big group of people were of course all gone. Now around this time I kind of started bumbling around. Remember, I had been walking/running around for 40 minutes (on too high heels) and apparently my brain doesn’t work that well under exhaustion. Looking back the clues seem so straightforward and I’m kicking myself that I could mess this up so enormously. I’ll first describe what I should have done.

I was supposed to go into Shaftesbury Avenue, where I would find the theater with Les Miserables. Two corners away from that is China Town, whose entrance is marked by two large oriental gates. There I was supposed to find two of the Joker’s henchmen who were giving out raffles, Joker cards and instructions to the final destination: the Odeon at Leicester Square. Where I would see the newest trailer. Ehm, yeah. I didn’t do all that. Instead I blundered around Shaftesbury Avenue, having no clue where to go. I came across some others who had lost the large group too and I ran along with them. We actually did pass the gates at China Town, but I’m guessing we were already too late, cause there weren’t any clowns there. Eventually we heard we had to be at the Odeon, raced over there, got into the cinema… only to discover we were too late. It was over. We had missed the trailer.

I’m still a bit disappointed with myself that I managed to miss what the whole quest was about. Maybe I shouldn’t have walked back and tried to figure the clues out and just have followed the big large group. Maybe I should have gotten the phone number of one of those big large group people, who could have told me where I should have gone to. Maybe I could have been a bit smarter and actually figure the (stupidly simple, now I know them) clues out. I know, I know, a lot of maybes.

Was this a waste of time? No. I actually don’t think it was. I may have not seen the trailer, but it should show up online in these next couple of days, right? I haven’t really missed out on anything; I just won’t see it as soon as I had hoped. It’s mainly about the experience: meeting other fans, figuring out the clues, and the thrill of the quest. That’s something I wouldn’t have gotten to do, if I had stayed at home. From what I heard the trailer is intense and extremely awesome. It appears the rest of us will have to wait for it till Sunday though. I mentioned before that everyone who had gotten in to see the trailer had received raffles. After the trailer there was a draw and one person won a can with the reel with the trailer. Everybody kind of assumed there must be a DVD also in it, so that it could be put online. Now I’m not that sure. The Joker site has a new page called Happy Trails, showing an advertisement for a projection system (using reels) available this Sunday. So I guess we’ll all have to wait. 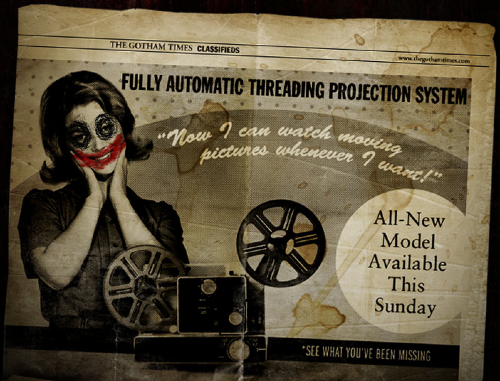 Even though this didn’t go exactly as I had imagined (now that’s an understatement), I love participating in these type of games. After We Tell Stories and this event, I can only hope I’ll be seeing (and doing) more in the future. Anyone want to join me next time?