Unlike in the US, where both Wall-E and Wanted opened last weekend, here in the UK we got stuck with only Wanted (we’ll have to wait a couple more weeks for the from-what-I’ve-heard-so-far “perfect” Wall-E). But, man, what a film did we get stuck with. It might not have the same finesse or perfection or timelessness that Wall-E undoubtly will have, but it takes you on one hell of a ride. 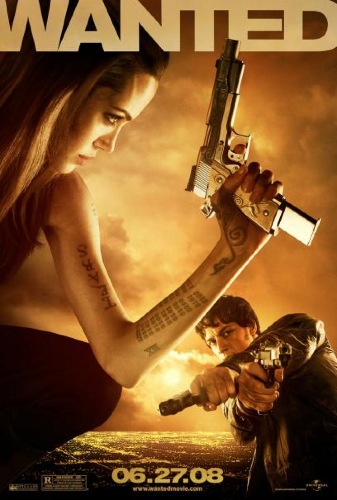 Wanted stars James McAvoy as lifeless gutless office cublicle dweller Wesley Gibson. His life sucks and he knows it; his girlfriend is cheating on him with his slimy best friend, his boss yells at him every day, his whole life consists of everyday the same old boring routine. It all turns around though when one day the sexy and deadly Fox (Angelina Jolie) shows up to inform him that his long lost father is actually an assassin and was murdered yesterday. Wesley is recruited into his father’s old organisation (led by Morgan Freeman), The Fraternity, a secret society of super assassins, who will train him to avenge his father.

First off, this movie is based on the graphic novel of the same name by Mark Millar, but trust me, it is nothing alike. This movie isn’t an adaptation, the whole premise is even completely different (superassassins in the movie, superheroes/villains in the comic)! I’m mainly surprised of Millar’s claim that 70% is like the comic. No, it isn’t! More like 15%. They’ve lifted a couple minor scenes from the beginning of the comic, threw in a couple of characters with the same name, but rewrote the rest of the entire movie. Don’t get me wrong, I love the film as it is, but don’t expect an adaption of the book. Truth is I’m not even sure a true adaption would have worked; I don’t think a lot of movie goers would have appreciated that story.

There are people who are going to hate this movie, who will call it stupid, who will lament the loss of this generation’s moral code (I’m not making this up, just check out the message board on IMDB). While I’m not disagreeing with all of them (I mean nobody can claim Wanted is a smart film), it somehow seems to me that some people expect every movie to be Oscar-worthy and dramatic and serious, and thereby disregarding and belittling all other movies. Some movies are just meant to be brainless entertainment. And Wanted is one of them.

On the action front Wanted delivers and it lives up to it’s R-rating/18-certificate. As you might have seen in the trailer, there’s a great car  chase at the beginning of the movie and after that (not to give any spoilers away) it only gets better. It’s R-rating comes from a lot of bloody Wesley, bullets going through heads and part of the film being set in an abbatoir, but it wasn’t as disgusting and bloody as it could have been. I felt queasier at 300 and Sin City, then with Wanted, just to give you a slight idea what type of R-rating we’re talking about.

James McAvoy is great as Wesley. If you had told me last year, this guy would be an action hero (not completely fitting, it sounds too goody two-shoes) I wouldn’t have believed you. But he manages to pull it off. His character starts off as a (to put it in the terms of the movie) pussy and turns into a bad-ass killer; and McAvoy makes you believe it. Wesley isn’t that likable, but you don’t care, he isn’t meant to be likable, he’s a killer. I didn’t get Angelina Jolie‘s casting as Fox when I first heard about it, but that’s because I was expecting the Fox from the comic. She’s perfect though as Fox in the movie, although her acting chops are thoroughly underused here; except for a couple key scenes, she’s just standing pretty for most of the movie. Any random actress/model/”actress/model” could have filled that position.

I was expecting a lot from director Timur Bekmambetov; I loved the visual style of two of his previous films, Nightwatch and Daywatch. Here he delivers… sometimes. Some scenes are beautifully shot, in a comi-book visceral like style, slightly over the top, but still stunning. Other times though he does the same “mistake”as a lot of current day action movie directors: he doesn’t focus and moves the camera way too quickly. Give us time to see what on the screen! Next to that there are a couple of screen transitions which were a bit confusing. Still I do look forward to see what he does next; he has the potential to be phenomenal.

Wanted is the perfect action summerflick; lots of action, a flimsy story, but a lot of fun. It’s not going to go down in cinematic history, but it’s a great way to spend an entertaining summer afternoon.