Typically I would never go to the cinema for the likes of a movie called Angus, Thongs and Perfect Snogging. But (as my previous posts can tell you) my sister was in town and she read and adored the books this movie’s based on. I managed to get some free tickets exactly when she was here, so there I was in a cinema full of teenagers (my sister’s 19), wondering who Angus was, what he’s going to do with thongs and who he’s gonna snog. Turns out Angus is the cat. 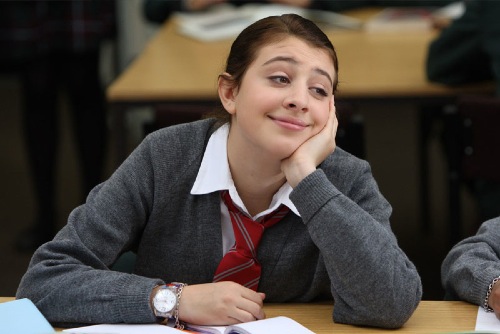 Georgia Nicolson is a 14 year old girl living in Eastborne. Just like every other 14 year old girl, she thinks she’s not pretty enough, thinks her parents don’t understand her and doesn’t understand boys. She’s not the most popular girl at school, but has a close group of three friends (they call themselves the Ace gang). When two new boys start at their school, Georgia and her best friend Jaz desperately want these two sex gods to like them (their words, not mine). What follows is a lot of scheming, blundering and snogging.

Release your inner 14 year old! I think anybody who ever was a 14 year old girl can somehow recognize themselves in this movie. I mean, even I, who never was that much of a girly girl and barely even dared to talk to boys (the ones I liked, that is) in high school, felt myself grinning and cringing at the situations Georgia got herself into. In the first quarter of an hour alone she shaves off half an eyebrow (which of course magically grows back) and that’s only the beginning of her (mis)adventures. It’s been resembled to Clueless and Mean Girls, which is a good comparison, but to me it looks most like a teenage Bridget Jones’ Diary. 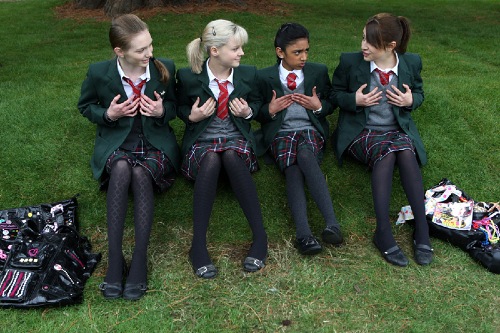 Georgia is an unlikely heroine, but I think she’s a perfect role model for young girls to look up to. She’s not some blonde superskinny supermodel teenager, but an actual normal girl; not drop dead gorgeous, but beautiful in her own way. The plot is a bit predictable and cheesy, but what did you expect from this type of movie. Just like the book (according to my sister) the movie is full of slang, like nunga-nungas (breasts), I had never heard before (not sure if this is slang specifically from the book, or just slang from the UK I haven’t come across yet).

The best friend Jaz is great; at times infuriatingly oblivious to things going on around her, she messes up Georgia’s plans quite often. There’s a great scene where while talking to one of the “sex gods” for the first time, she puts on a Keira Knightley voice, trying to be mature and sophisticated. The “sex gods” are not what I would call sex gods, although if I was that age, chances are I would have been crushing on them. 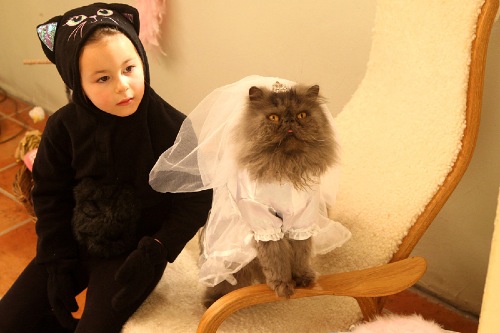 And then there’s Angus. And Libby. Libby is Georgia’s 5 year old sister, who thinks she’s a cat and loves dressing Angus up. Angus alone is already as cute as can be, but dressed up?! Even more adorable. There’s one scene where Angus is dressed up in something ridiculous (like a pirate or princess) and Libby is decorating him with cooked pasta. This is all just going on in the background while Georgia and her mother are discussing something. It might sound weird, but it’s so sweet on screen.

Teenage girls are going to love this movie, grown-up girls could love this movie. Guys, avoid this at all costs; there’s a sliver of a chance you might enjoy this, but it’s more likely you’ll find it boring and annoying as hell. Girls, do your boyfriends (and yourself) a favour and don’t drag him to this movie. Instead, take a bunch of good girlfriends, who you know you can giggle and laugh with. Angus, Thongs and Perfect Snogging is a perfect girls night out or dvd sleepover movie; it’s cheesy and predictable as hell, but that’s not what it’s about, right?