I’ve been meaning to write about this conference for more than a week now, but things have just kept on popping up. As I said in a previous post, Playful was a different type of games design conference, not only featuring game designers (in fact, I think there were only two that were actually just that), but mainly people who were passionate about games and had a different perspective to game design.

I arrived slightly late (ugh, public transport), so I missed the intro from Toby Barnes and most of the talk from James Wallis. I got to see all the other presentations though and all of them gave a really unique view. In total there were 15 talks, each of them 20 minutes long. I won’t try to describe every single presentation, instead I’ll highlight the ones I found most interesting.

Roo Reynolds had a cool talk about how he used ControllerMate to interpret the Guitarhero/Rockband guitar “buttons” and pass it on to GarageBand. The result was being able to use your GuitarHero guitar as an actual instrument and create and play your own (or other people’s) songs. His slides and audiocast are up on Slideshare. Here’s a short clip of Roo playing Hotel California:

A nice (and completely unintentional) followup to Roo’s talk was Matthew Irvine Brown‘s presentation. He talked about the similarities between how you learn games and music (how you learn how to play a game and how you learn to play music, like reading notes and scales). He had done a couple of experiments to see how people could learn music principles through a more game like structure.

In one experiment Matthew took brass band type of instruments like trumpets, trombone and tuba, and created Guitarhero-like plastic controllers. In another he used a breath controller as the controller for a small remote control car (exhaling/inhaling in different degrees caused the car to go left/right). Finally Matthew had another experiment with a singing sock puppet (see this video to see what I mean), which got these type of reactions from people:

Adrian Hon normally talks about Alternate Reality Games and that type of game design, but for this conference he wanted to do something different and not rehash an old presentation. So he talked about addiction and his own experiences with it. He told us how a couple of months ago he decided to play Team Fortress 2. Now the cool thing of that game is that you can play in clans with people, so Adrian found a fun clan to join and played regularly with the same group. Only problem: the clan was based in the US, and their standard playing hours were 1am-3am.

After a while Adrian had trouble sleeping and chose for a weird solution: drink alcohol. Apparently for him alcohol would make him sleepy, so he’d drink a couple of beer/wine/(I don’t remember what exactly) every time he would play at night. At one point though it came so far that he’d also drink on the nights he didn’t play. It wasn’t a lot, not enough to think “oh, I’m a alcoholic”, but eventually he realised he shouldn’t be drinking like that. So he stopped with the drinking and consequently with Team Fortress 2 too.

212 Box and Mystery on Fifth Avenue

Eric Clough is an architect with 212box (based in New York) and he first gave a couple of examples of cool design stuff his company had done. The main one that everyone was interested in though was Mystery on Fifth Avenue (check out the New York Times article). Eric explained a lot about this apartment, highlighting a lot of things not featured in the article. 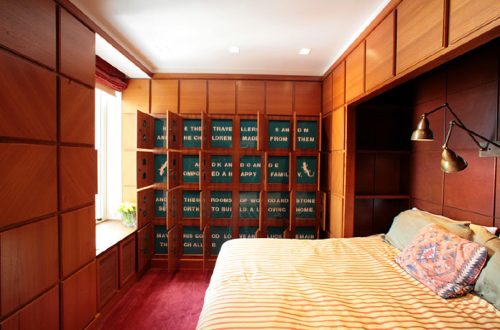 Kars Alfrink gave a interesting presentation and a different take on design. The documentary film Dogtown and Z-Boys is about the beginning/birth of competitive skateboarding. Skateboards at the time (1970s) were seen as a land-bound pastime for surfers, nothing more. A group of kids took these skateboards and combined them with the empty concrete round swimming pools to create a more acrobatic and exhilarating game. They basically took these existing objects and created their own game with it. Kars proposed that games shouldn’t be designed, but instead tools should be designed with which people can create their own games.

In this talk Matt Biddulph showed the results of hardware hacking and playing around with electronics. He first explained how it was possible through products like Arduino and that basically you can hack anything together you want with some basic soldering skills. He showed examples like Johnny Lee’s Wii hack, the Tenori-On, the BBC Dabagotchi and the DSBrut.

There were 9 more presentations, each giving a unique and cool perspective to game design. Check out some other blog posts about Playful: Digital Consultant, Roo Reynolds, James Wallis. I’m hoping most of the talks will be uploaded, cause I did see a camera recording everything. All in all, it was a great day and I look forward to next year’s event.