Move Over Nessie: The Channel Creature

Around the time when I was 14, I was a bit of a weird kid: I was completely into UFOs, conspiracy theories and anything paranormal or other/outer worldy. One of my areas of interest was cryptozoology: the study of legendary, according-to-main-stream-biology-nonexistent animals, like Big Foot and Nessie (my theory on Nessie is that the Loch contains a hole in time, and all observations of Nessie are just glimpses of the past).

Now a sighting of such a creature has been reported a bit closer to home: the Association of Maritime Research (AMR), a small, non-existent organization, is currently conducting research into possible sightings of suspicious sea creatures in the English Channel. The AMR was created in 1901 in order to promote a better understanding of deep-sea life and the curious phenomena that occur in the depth of the oceans. Their approach to research is to gather testimonials and question scientists specialising in marine research in an attempt to find a scientific explanation for the various sightings. The AMR’s intention is to communicate their findings to the general public and enable them to participate interactively in the continuing research. 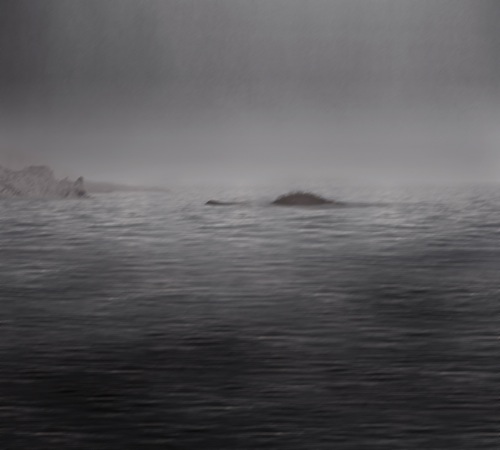 The sighting that spun off this whole investigation happened on 20th April 2009. On that day Thierry and Sophie were enjoying a walk at the Boulogne Harbour. Thierry reports: “Sophie and I are passionate about boats and sealife and we were filming all the different types of boats sailing out of the harbour. As I was filming, I suddenly became aware of a large shape which appeared on the horizon. I zoomed in on it and to my surprise I saw a huge, dark, rapidly moving object, which disappeared within a matter of seconds. I know a bit about sea and marine life, if I say so myself, and I knew this wasn’t a whale or shark. I knew I just saw something that was yet unseen by man.”

Thierry decided to contact the AMR who are pursuing further investigations. Subsequently the AMR has collected a substantial number of testimonials from different areas. The strong similarities between the descriptions seem to confirm the existence of a ‘gigantic’ and extremely ‘fast-moving’ creature off our shores. 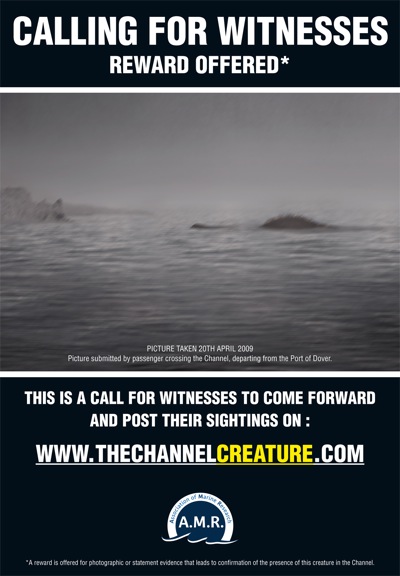 The AMR’s success in identifying this marine phenomenon is dependent upon the participation of the general public. As the first report came from Dover they have put in place a multimedia campaign calling for witnesses to come forward. This will include the distribution of flyers, radio, press and online communications.

This is a call out to anybody who might have witnessed any strange phenomena in the English Channel to contact the AMR immediately via their website TheChannelCreature.com. A reward is being offered for evidence leading directly to proof of this creature’s existence.